I originally wrote this article on March of 2012, but over the past year this topic has been one of the most searched blog posts on my site. Lightning safety is an important topic, so I revisited the information, updated it and present it again at the top of my blog.

When you look at my all copper J-Pole antennas, you would assume that they are more susceptible to lightning strikes than fiberglass encased vertical antennas. But in actuality, they are no more or less dangerous than any other antenna. The recent outbreak of severe weather and tornadoes drives home the message that your antenna system needs to be protected from lightning strikes.

Lightning is a product of thunderstorm development. As thunderstorms develop, the ice crystals inside a growing thunder cloud become electrically charged. When the static charge becomes so great that the insulating air around the crystals can’t contain it; the charge is released as a lightning bolt. The lightning will seek the path of least resistance and strike the closest grounded object. [pq]Any antenna can act as a giant lightning rod.[/pq] 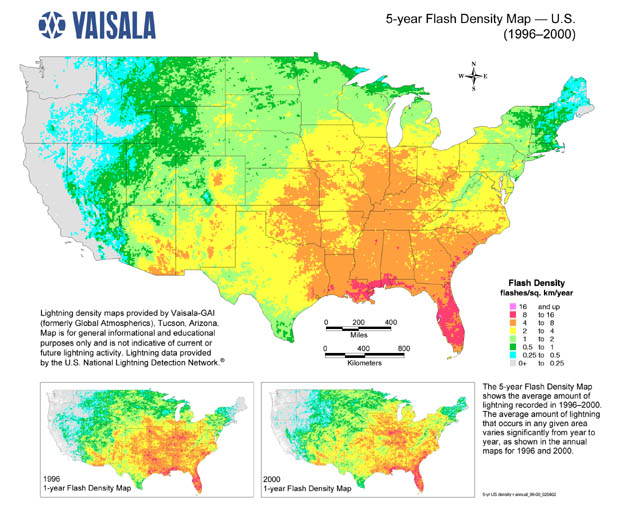 Not all areas of the country are equally susceptible to lightning. Some regions are more prone to thunderstorms than others, so lightning protection can be as much of a risk management issue as a safety one. Living in the west, you may not be as concerned about lightning as say someone in Florida. But lightning can occur anywhere, so erring on the side of safety is recommended.

To protect yourself, home, and your radio equipment you need to install some basic lightning protections into your antenna system. Most lightning protection systems serve two purposes: to channel lightning’s electrical energy to a suitable ground, and to keep lightning energy from entering your home.

Grounding your tower and antenna system is the first step for lightning protection. All antennas on a single tower or mast should go to a common ground point. If you have multiple towers or masts at your location, then each tower can have it’s own ground system. The easiest is to ground your antennas and tower so that a lightning strike will go into the ground and away from your house. Antennas should be ground bonded to the tower and the tower bonded to an eight foot ground rod buried at the base of the tower. 10 gauge solid electrical wire is heavy enough for most antenna systems.

Since the lightning will also follow the coax into your radios, you need to also isolate the coax from the antenna. Lightning arrestors are small devices that are attached inline of your coax feedline. Like a fuse, they are designed to break the connection when a sudden burst of energy comes across them. There are many brands of arrestors on the market. One such, Polyphaser makes lightning arrestors that can do just that job. In lieu of an arrestor, physically disconnecting your equipment from the feedline during the thunderstorm also helps. Lightning energy will follow the feedline, but combined with a proper ground system, damage will be minimal.

Finally, if you must operate during a thunderstorm, I recommend using a protected antenna, maybe in your attic or located inside your home. Your house will act like a Faraday cage and provide natural protection from the lightning, allowing you to operate without fear of lightning hitting the antenna.