Greetings and Salutations, My name is Michael Martens and I’ve been an active licensed amateur radio operator since 1999.

A common question I get is “how did you get involved with ham radio?”

Great question. Well, back in ’99 we were on the cusp of Y2K and we all thought the world was going to end. I was just getting prepared for doomsday.  But in reality the real answer isn’t so sexy or glamorous.

Actually, I’ve been a life long scanner buff and short wave listener. I got my first world band radio back when I was 10 and I loved staying up late at night listening to the sounds of the world. Back then you needed morse code to get your license so at the time I never thought I’d get over that hurdle at such a young age. Maybe the real reason was that I didn’t have an elmer to prod me.

Fast forward a few years, through high school and college (graduated from the University of Wisconsin with a degree in Communication Arts). I was at the time working sales and marketing for a software development company and a very active summer of severe thunderstorms got me active in listening to the police scanner. I then started monitoring the local ham repeaters, one thing led to another and I picked up a copy of the ARRL’s Now Your Talking and a Gordon West code practice tape. In August of 1999 I took the Novice, Tech, and 5WPM code test and exited the session as a Tech-Plus.

Back then the Tech-Plus basically had the privileges as today’s technician license holder: voice above 30 MHz, code and voice on 28.1-28.5 MHz on the 10 meter band, and code on the novice segments of the lower HF bands. But license restructuring was soon on its way and I did a paper upgrade to General about 6 months later.

Not leaving well enough alone, I upgraded to Extra in February of 2002 and have kept active in the hobby ever since. I don’t think my involvement and expertise wouldn’t have grown to the point it has if it weren’t for being involved with an active local amateur radio club and a great group of mentors to bounce questions off of. 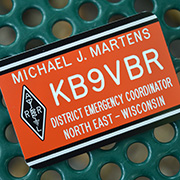 Today, besides helping new hams get on the air with my antennas,  Emergency Communications and public service are a big part of what I do with Amateur Radio. I’m on the board of directors for our local ham radio club, EC for our ARES/RACES group, and a certified National Weather Service SKYWARN storm spotter. You’ll find me active in events in the community; often using my antennas as part of the event’s communication plans.

How did you get started with selling J-Pole antennas

An even better question. With experience in sales in marketing, I saw a need and filled it with my line of J-Pole and Slim Jim antennas. But in reality, the truth may be a bit more interesting.

Back in 2001, our local ham radio club was experimenting with APRS. We were building home stations and mobile trackers and putting digipeaters all over the area. This was back in the day when you could shop at a hamfest and get an old packet TNC for $20. Try that today. Since we needed antennas, the J-Pole seemed like an inexpensive solution. I built one and it worked great, so I built another for our Field Day setup. Another ham liked that antenna so much, he asked if he could buy it. Since it was a spare, I said sure. Hey, maybe we’re on to something here.

I then built a few more, took some pictures and put them up on eBay. The antennas started selling. I then built a website and sold a few more. This was good money and it was nice to have some spare cash for radios and what not.

Between 2001 and 2010, sales were steady, but not outstanding. In the summer of 2010, job changes led me to start my own marketing business. At this point it was do or die for the antenna business. I hunkered down, put my marketing muscle to work and grew the business to the point where it is no longer a hobby or sideline venture.

I’m glad to say that now in 2015, KB9VBR J-Pole antennas have become a household word and a growing first choice for new ham radio operators nationwide.

I love questions that start out this way. We all were new to the amateur radio hobby, even the crustiest old guy with the 1 by 2 call.

Amateur radio has been a great hobby for me as I’ve worked in a wide variety of technical and non technical fields. As a new ham I’m sure you’re finding that same level of enjoyment.

One way that I give back to the hobby is to patiently answer questions and mentor new hams in the field. I’m also a Volunteer Examiner, so I’ve also had my part in several hams getting their first license or upgrade.

If you have a question about ham radio, antennas, or any of the products that I sell, I’d be glad to answer them. Just drop me an email on the contact form.

How about a little about your personal life?

Glad you asked, it’s what makes a person more well rounded. I live in Wausau, which is located in North Central Wisconsin. Yes we get a lot of snow in the winter and it can get quite chilly in January. But we’re a hardy bunch and love our wintertime outdoor sports.

I’m married, have two children (both teenagers), and when I’m not talking on the radio or building antennas I enjoy camping, hiking, the outdoors, photography, and cooking.

Now aren’t you glad you asked.

The antenna I’m holding was featured in the January, 2006 issue of Popular Communications Magazine!

Page 53, here’s an excerpt from the article:
Connecting the coax to my Yaesu VX-6R, I tuned around and found an active repeater. During a lull, I put my callsign out and received an immediate reply. Imagine my surprise when I was told that the repeater was on Catalina Island- 69 miles away from my location. Not bad!
-Laura Q – KI6AOK