Setting up APRS on the Yaesu FT3DR Handheld Transceiver

Long time watchers of the channel know that APRS or the Automated Position Reporting System is a regular subject of mine. I’ve been an active participant in the APRS field for almost as long as I’ve been a ham‚ so I’ve seen quite a bit of changes over the years. Probably the biggest and most welcome change is the integration of APRS into handheld and mobile transceivers. In the early days we’d have all these separate components like the radio‚ tracker device‚ and GPS that all had to be connected. And if you wanted to go mobile you’d hope to god that none of the wires came undone.  That integration is what led me to the Yaesu XV8R over 10 years ago. And I’ve used it successfully to track on my bicycle for years. And now with he Yaesu FT3DR the APRS integration is even better and easier to use. So in this video I’m going to go through the APRS settings and features of the FT3DR so you can get on the air and start having fun with it.

Now I must warn you‚ I will be using some terms and jargon that the specific to APRS or the Automated Position Reporting System. If you are new to APRS or are a bit unfamiliar with the terminology‚ I do recommend that you start out by watching my Intro to APRS video. This will cover terms like SSID‚ Paths‚ beacons‚ and the like.

Unfortunately It’s not like you can press one button and make it all work. There are several steps in the process so we are going to go through: setting your APRS callsign and SSID‚ Selecting the Symbol‚ Setting the APRS Frequency‚ Turning on the GPS‚ and activating the APRS modem.

So to get going we’re gonna head on over to the APRS menu by pressing the display button and then pressing the APRS button on the screen. The APRS menu contains all the settings you need to get the radio going as a tracker or to interface with the APRS network. so I’ll scroll through this menu as we change and activate the features. Many of the settings can also be adjusted via the programming software so I’ll try to show you the relevant spots on that screen too.

First off let’s set up your APRS callsign. When you got your FT3DR the first thing you did was to set the callsign for Yaesu system fusion. You’ll also need to set your callsign and the SSID for APRS operation. Press the callsign option which is item 23 and enter your callsign and SSID or secondary station identifier. This number can be nothing to 15. SSIDs are used to identify the type of station you are. For handheld tracker radios‚ the standard convention is to use an SSID of 7. Just remember that if you have multiple APRS radios each will need a separate SSID if they will be on the air at the same time. So if I was going to use my VX8 and my FT3DR simultaneously I would need to either assign separate callsigns to them or use the same aprs callsign and different SSIDs

The next step is to select the symbol for your station. Since APRS relies on graphical maps to present information‚ using a descriptive symbol is another quick way to identify the type of station you are. Select item number 25 “my symbol” on the menu. The FT3DR has a choice of four default symbols: a person‚ bicycle‚ automobile‚ and radio. If you press the display button you can also select any of the other 100 or so icons that are part of the APRS symbol set so you aren’t limited to the four defaults.

The third step is to select the APRS frequency. In North America we use 144.39 Mhz as the standard APRS frequency. The FT3DR runs APRS off the B channel. You could put the frequency in the VFO but I find the easiest is to set up memory channel 1 as your APRS channel and tune your B band to that channel.

Now that we have the callsign Icon and channel set- we are just about ready to activate the APRS. So to do that we will first turn on the GPS. You will need your position in the radio so the GPS should be activated. Go to option 20 GPS power and turn it on. After you do that go to item number 24 on the menu and select My Position. Your position can be derived from the GPS or you can hard code a location into the radio. You may ask why you wouldn’t want to use the GPS? The answer is that the GPS consumes power and if you are stationary or in a building that doesn’t receive the GPS signal‚ you can use a manual GPS location or one of 10 location memories. When I’m at home I’ll turn off the GPS to extend battery life and set my location to one of the position memories.

Next we’ll turn on the APRS modem. That’s option 4. You have a choice of 1200 or 9600 baud. On VHF at 144.39 Mhz we use 1200 baud. 9600 baud is not commonly used- although there has been some experimentation at the higher speed. Once the modem is activated you are one the air and will start receiving packets on the B band. One final setting you may want to check is number 8- APRS mute. This will silence the APRS channel so when the modem is on you won’t hear the audio on the channel.

Now that you are receiving APRS messages‚ I’ll take you through what you’ll see on the screen. The first time the radio receives a packet from a station it will display all the information on the screen. You’ll see it’s distance and heading relative to you and it’s icon and the comment text. If it’s a weather station‚ you’ll also see the weather station data. Trackers will also show the speed and heading. You can refer back to the station list by pressing the Function button and then the station list button 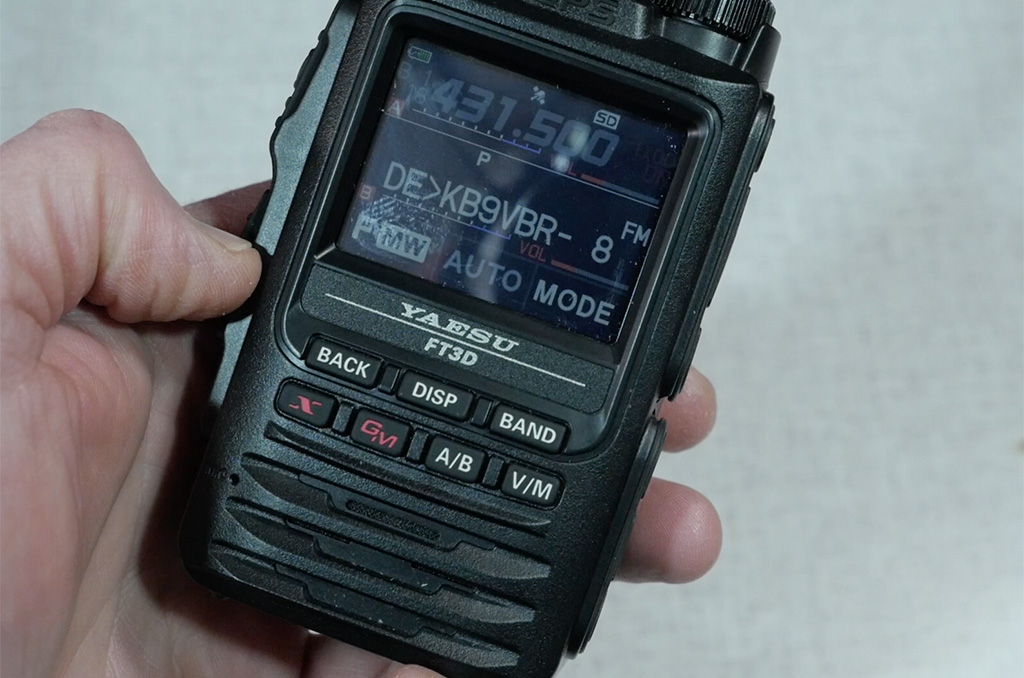 If the FT3DR receives a duplicate packet it won’t flash the entire screen of information but instead display the callsign and packet type on the B channel area. You see a D for duplicate then P for position and then the callsign and SSID. My VX8 never did this so I find it a really neat feature. Actually I wish the FTM-400 did the same but I digress.

Receiving APRS packets is only half the function of the radio. If you are using it as a tracker you will also want to transmit your location. So we’re going to set up a couple more features: the beacon rate and beacon text

Lets first set the beacon text. Go to option number 15 Beacon Status Text and set your text. Turn this feature on if its off and scroll down to the text field. You can have up to five different text options. I’ll use different status lines if I’m pedestrian with the radio or riding on my bike. Hit the display button and then edit the text. I will admit that this is a lot easier to do if you are using the software- so maybe consider doing that when you are setting up your radio. but once the status text is set up‚ you will seldom change it.

Next set your beacon interval. Selecting the beacon interval can be a little bit of an art. Handheld radios do better getting into the system if you beacon frequently. But doing so will run down your battery‚ so you will want interval that reflects your speed or rate of motion. I usually select either 90 seconds or 2 minutes if I’m on the bike but may go three minutes if I’m pedestrian. Once the rate is selected go to option 16 and turn the beacon transmit to auto. You’ll now begin beaconing your location at regular intervals. 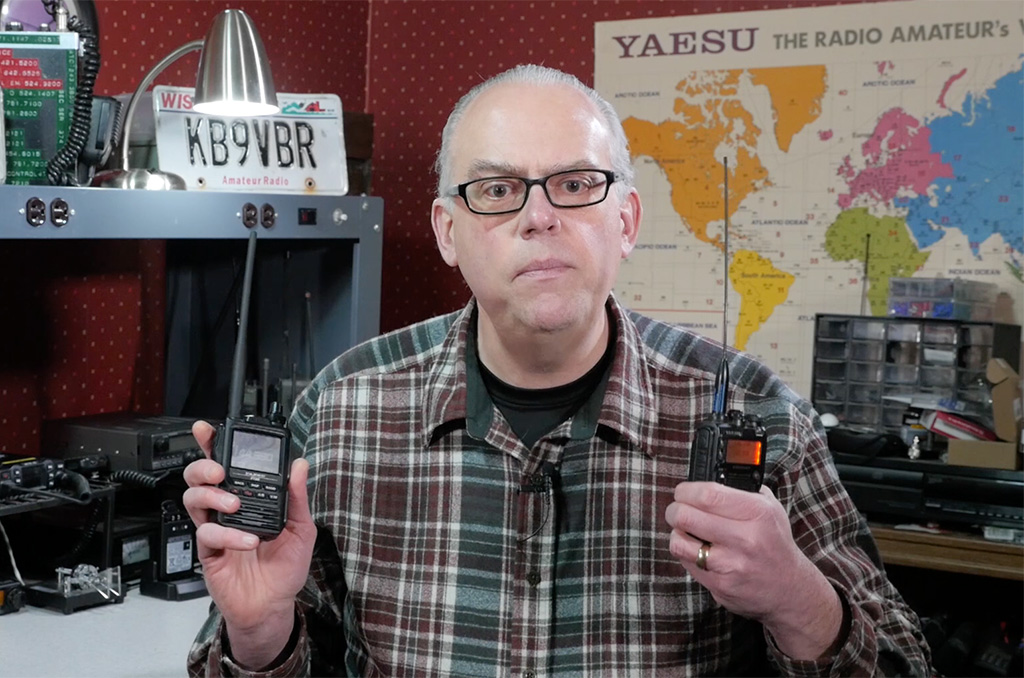 One concern with handheld radios is that if the unit is on your belt and you are moving- the APRS network may not pick up your beacons. APRS tends to favor more powerful transmitters over weaker ones. Since there is no guaranteed reception of your signal‚ you are at the mercy of everyone else on the channel. So don’t expect that you’ll get into the network with every packet. On my bike or walking I’ve found a 20% reception rate and even lower rates if the radio isn’t using an external antenna. But there are a couple of things you can do to mitigate that situation.

First off- use an external antenna. Getting the antenna away from your body makes a big difference. Next would be to increase your beacon rate- but this comes with a trade off of reducing your battery life. so your third option would be to use a fill in digipeater. I’ve done this were I was hiking in a defined area. I put a portable digipeater in my car at the trailhead and it was set to only digipeat my packets. This helped get my signal out since it only digipeated the first hop packets it received. As long as you are digipeating the first hop wide1-1 packet it won’t overwhelm the APRS network. I’ve got a video on how to set up a portable digipeater so You’ll want to check that out in the video description below.

So when I say first hop packet‚ I’m talking about your digi path. Menu function 18 is the digi path. The FT3DR has three preset paths and space for a total of 8 path settings. Path 1 is actually the OFF setting so if you don’t wish to designate a path you’d set it there. Path 2 is Wide1-1 and Path three is Wide1-1‚ Wide2-2. Path three is the most common setting for portables so I recommend you set your path to that. But you could use one of the additional path fields to create your own path- say you want to go through a certain digipeater- you can set that up in the additional paths. My video on APRS SSID paths and beacons goes through all that information. and you can find a link to it in the video description below.

There are more features like messaging‚ smart beaconing‚ and tweaking your advanced setting that I’ll save that for a future video. The purpose of this one was to just get you up and running with APRS.

Do you have any Questions or comments about using APRS with the Yaesu FT3DR? Please leave them in the comments below. I’ll filter through them and make a followup video based on your feedback. And if any of what I said seeming confusing- please check out my introductory APRS videos.