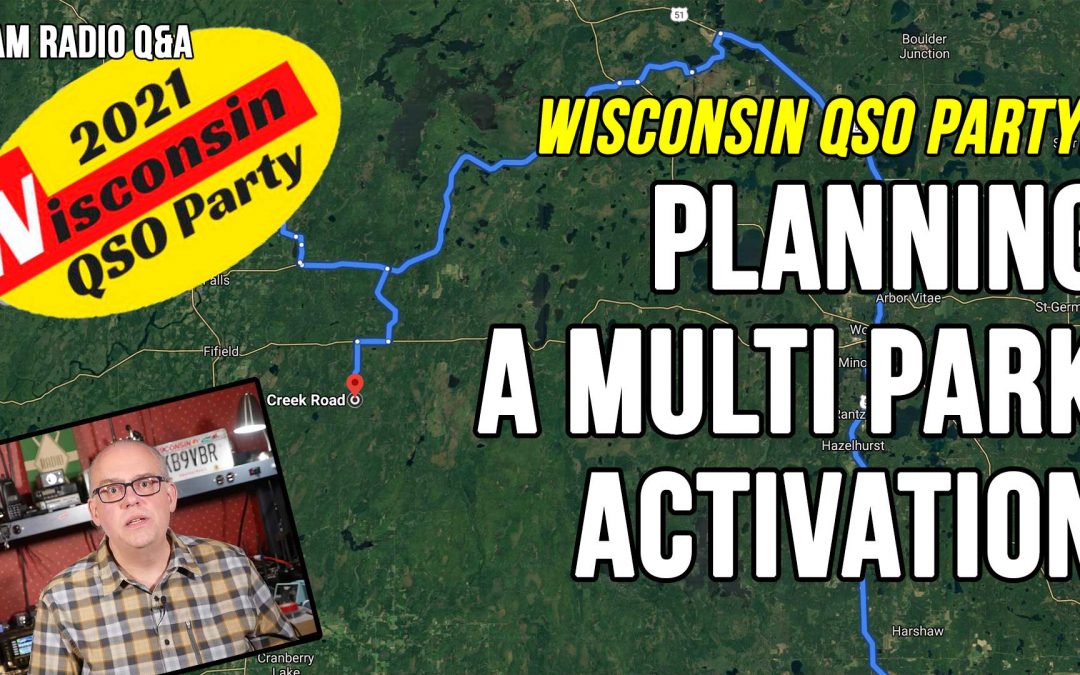 How I go about planning a four park/four county Parks on the Air activation. Listen for me on the air: Wisconsin QSO Party, Sunday March 14, 2021 starting at 1800z (1:00pm CDT).

Two of my favorite annual activities are ARRL Field Day and the Wisconsin QSO Party. I have a passion for both of them and I’ve participated in them since the beginning of my amateur radio career. The QSO party, especially, I really enjoy. The first year I participated in it, I didn’t have any HF gear yet, so I had the two meter mobile in the car with a whip antenna on the trunk and hit the road. I drove to the Fox Valley, one of the more populated parts of Wisconsin, and worked 2 meter simplex as I drove around the metro areas. I made about 30 or so contacts that first year and was hooked. Since then I’ve worked out of my home solo and worked out of other ham’s homes as part of a team, but haven’t worked mobile since that first time. This year that is all going to change and I will need your help, so be sure to stick around to the end to find out how.

I like to add a little bit of challenge to things to make them interesting. So this year for the QSO party I’m going to hit the road, activate some parks for Parks on the air credit, and put some of the underserved counties in northern Wisconsin on the map.

Now operating mobile or portable for a parks on the air activation takes a little bit of planning, but doing it for multiple parks and working a contest like QSO party at the same time brings in a whole new level of challenge. So I’m going to talk a bit about planning for this event and hopefully you can use some of my process to aid in your own plans for either a parks on the air activation or mobile QSO party operation.

At least one park has to be never been activated previously

And most importantly, have fun.

When planning your objectives you want to use the SMART criteria. SMART is an acronym of Specific, Measurable, Achievable, Realistic, and Time based. So our measure of success will be on how well our outcomes fit into the goals.

First, the specifics of the plan: four parks in four counties. In order to minimize travel time I looked at the Parks on the Air locations map and found four entities in northern Wisconsin that were relatively close to each other. All four were in different counties and each county is typically underserved during the QSO party as they all have relatively low populations.

So I picked the following: Powell Marsh Wildlife Area in Vilas County, Northern Highland State Forest in Iron County, Hay Creek Hoffman Lake Wildlife Area in Ashland County, and Chequamegon-Nicolet National Forest in Price County. These four counties are adjacent to each other so once I drive to the first location, travel time between them is only about 30 minutes. To make things better, Powell Marsh and the Northern Highland State Forest are next to each other so it’s only a five minute trip across the county line to move from one to the other.

Two of the parks: Powell Marsh and Hay Creek have never been activated, so selecting those parks meets my second goal. My parks are relatively close together so I’ve minimized travel time. The QSO party is only 7 hours long, so the less time I spend on the road, the more time I have to operate.

And to make the plan achievable, this is how I’ll be operating. Since I am activating parks, I need to be stationary. While driving and operating would maximize my on air time I wouldn’t justifiably be able activate a park. So I’ve pre-identified spots in the parks where I can set up. I did this by looking at the park maps on the Wisconsin Department of Natural Resources website and compared them to Google Maps satellite view. This enabled me to identify parking areas that are located near trail heads, picnic areas, and boat landings. Since time will be of the essence, I’ll know in advance where in the park or wildlife area I will want to set up. You can use this bit of intelligence when your planning your own parks on the air activation.

Next I need an antenna system. Since my goal is to work 75 40 and 20 meters, a multiband antenna would be ideal. My primary antenna will be my 20 and 40 meter linked dipole antenna. I’ve used this antenna with great results in several activations so I’m familiar with its operation and I know it will do well on 20 and 40 meters. As for 75 meters, I’ve used that antenna set to 40 meters with a tuner as an NVIS or Near Vertical Incidence Skywave Propagation antenna on 75 meters. In that configuration I had no problem working stations up to 200 miles out. This will be perfect for making in state contacts during the QSO party.

Normally I set the antenna up in a tree, but in order to expedite setup and teardown, I am going to use a push up mast on the back of the vehicle. The mast will be supported by a flagpole mount that goes into the hitch receiver of my car. The mast is a 24 foot painters extension pole. I’ll be able to put the antenna up at about 24 feet in an inverted Vee formation with the legs of the antenna tied off on trees or near the ground. The ground will most likely still be frozen so I’ll have to bring some weights to use as anchor points.

Backup antenna will be the Shark HF sticks with a mag mount placed on the roof of the car. If I’m in a situation where I can’t get the dipole up, I’ll still be able to get on the air with the shark stick vertical antennas.

Of course for the transceiver I’ll use my Yaesu FT-891, an LDG Z-11 ProII auto tuner for the 75 meter band, and 50 amp hour LiFePO4 battery for power. Allowable modes in the QSO party are CW and phone, so I’ll be running single side band voice during the contest.

As for time, it’s a 90 minute drive to the first park, I will leave early from home and be set up so I can be on the air at 1:00pm. Travel time from park to park is about a half hour and my setup time is about 10 minutes, that leaves me with about an hour per park to be on the air. If my calculations are correct, I’ll have 90 minutes to spare until the end of the contest at 8:00pm. Daylight saving time kicks in this weekend, so my sunset will be a little after 7:00pm. So I really won’t be operating the last hour of the event as I don’t want to tear down in the dark and I have a 90 minute drive back home. This leaves little time for things to go wrong, so the entire event from setup, operation, teardown, and travel will have to be carefully orchestrated.

Finally, let’s talk about the weather. The forecast is good for Sunday. it should be sunny with a high of about 40. Rain, bitter cold, or high winds would affect the outcome and I would have to adjust my plans. Since I’ll be in Northern Wisconsin, I also have to consider snow cover. According to the weather service, there is about 4-8 inches of snow in much of the northwoods. But that amount is quickly disappearing as we had warm weather and rain this last week. I expect the parking areas to be somewhat maintained as the lakes are popular locations for ice fishing.

And that’s my plan for this year’s Wisconsin QSO party. I expect the combination of working mobile and activating multiple parks for this year’s event should be challenging and fast paced. The measure of the success, other than hitting my goals, will be on how many contacts I make. And this is where you come in to help. Be sure to listen for me on the air this Sunday March 14n 2021 starting at 18:00 Zulu or 1:00pm central daylight time. I will work primarily 75 and 40 meters, but will also do a bit of 20m as conditions warrant. I’ll try to get my spots up on the POTA.us website. Just be aware that I will be calling CQ for the Wisconsin QSO Party but you will get POTA credit.

Do you have questions or comments about my plans for the upcoming Wisconsin QSO Party and multi park activation? Please leave it in the comments below. I’ll filter through the comments and follow up with them. Who knows, you may end up on my next Your Questions Answered livestream. For more articles and information, please check out my blog at www.jpole-antenna.com