In the 15 year’s I’ve held my amateur radio license, I’ve hardly ever missed a Field Day. I also thought I had seen just about everything that could happen or go wrong at a field day site. I’ve experienced brutal hot weather, endless bugs, rain during setup, rain during the event, equipment malfunctions of various degrees; heck one year we actually let the smoke out of a piece of equipment. Fortunately in all my adventures, no one was injured or otherwise hurt. But this year’s event came extremely close to that happening. 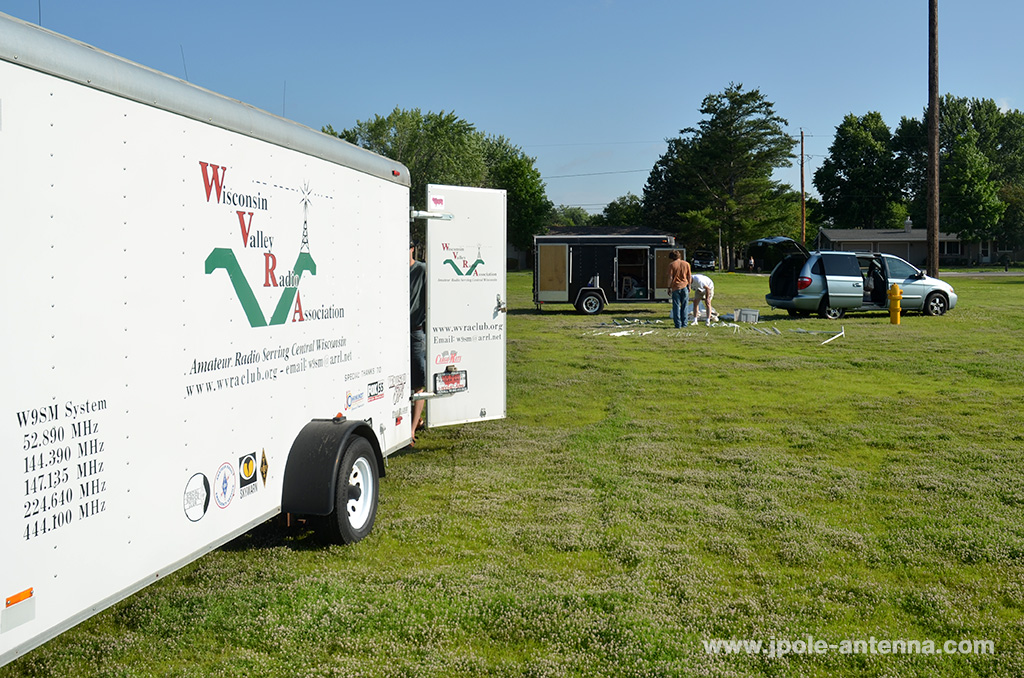 Our local amateur radio club, The Wisconsin Valley Radio Association, chose to hold their Field Day Event in Kennedy Park in Weston. We have only two criteria when choosing our Field Day Locations, they must be free and give us good exposure to the public. Nice bathrooms on the site is a bonus, but we can work around that. Kennedy park is a large flat area with ball diamonds, aquatic center, and skate park. We were able to set up where the skating rink and warming house it, giving us access to some unused light poles to hang antennas from. 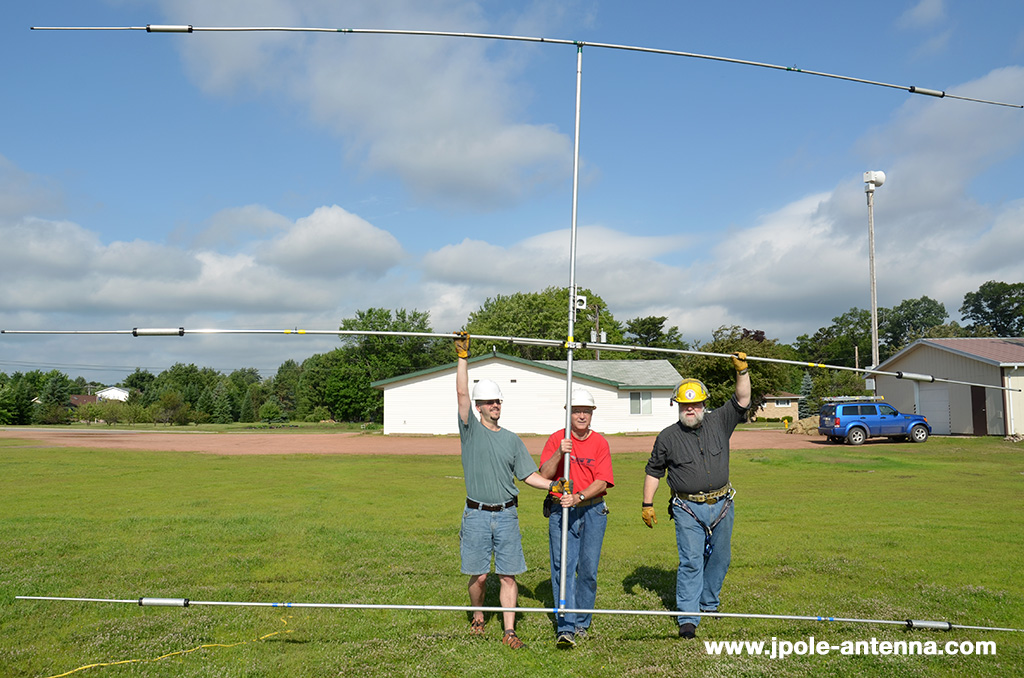 It’s a cloud-burner! Walking the triband beam over the 28 foot tower for mounting.

Setup went pretty smooth, the focal point of our operation are two large car ports that are lashed together to give protection from the elements during the event. Since rain was in the forecast, the car ports should keep us dry. From there we set up a 28 foot tower with a tri-band beam antenna, an end fed V wire antenna, six meter moxon beam, 16 foot vertical antenna, and a 20 meter Hex Beam antenna that one club member was experimenting with. Rigs included the club’s TS-850SAT and TS-2000 transceivers and a couple of club member radios. All logging was done with the N3JFP Field Day logging program running on a hamnet-broadband mesh network. We started setup at 8:00am and actually had everything in place and operational be 12:00 noon.

Placed in a weather proof box away from the site is the mesh node with our Raspberry Pi server and wifi repeater. The 24db parabolic antenna is overkill as this node was only a few hundred feet away from the rest of the activity.

An important component to this year’s Field Day operations was the inclusion of a hamnet-broadband mesh network. I’ve always wanted a wifi network to link our field day stations, but that goal was difficult until the mesh came along. At our site we had a five node mesh network for the logging computers, file server, and IP camera. Using the broadband-hamnet firmware on the Linksys WRT54GL Wireless-G Broadband series Routers

, the network itself was plug and play. First, turn on the mesh enabled routers. Second, plug the notebook computer via ethernet into the routers. Third, configure N3FJP Field Day Logging Software to use the shared file on the server running on a small Raspberry Pi computer. It was that easy. Our mesh nodes were in close proximity of each other, but if our operation was more spread out, we could have easily added high gain directional antennas to our nodes to increase our range hundreds of feet or more. 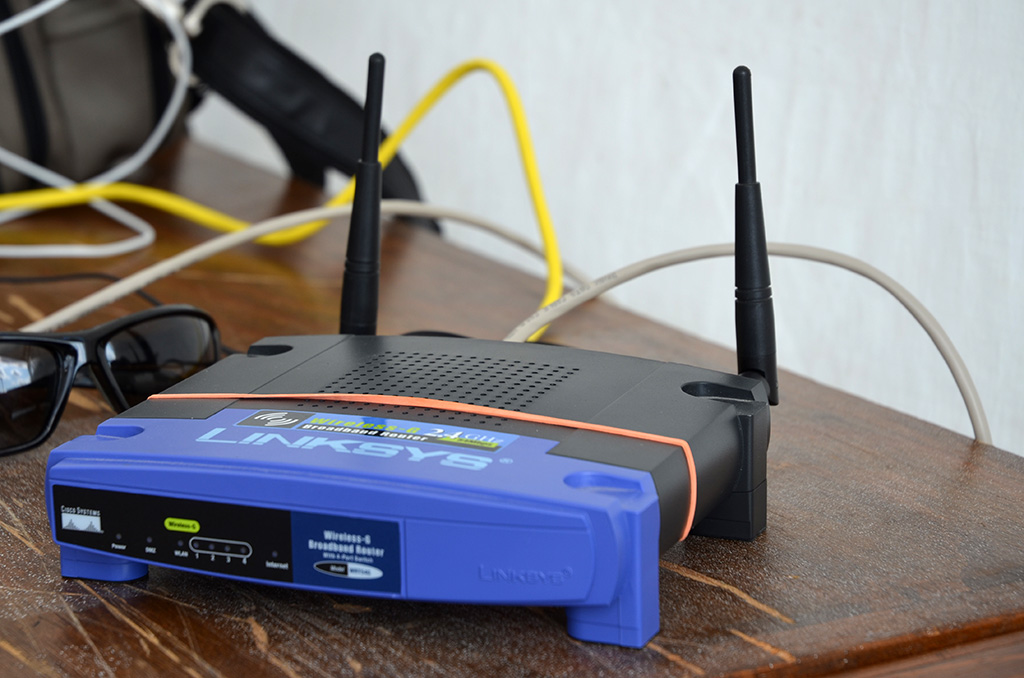 Each logging computer was connected to it’s own separate mesh node, although they were close enough that we could have connected all four machines to one node via the ethernet cables.

We also had an educational session that was actually very well attended by club members and hams from out of the area. We explained how Mesh works, what it is good for, and then offered a hands-on demonstration of the node operation. Everyone that attended is excited about this technology and I think we will see a lot more mesh activity in the state. 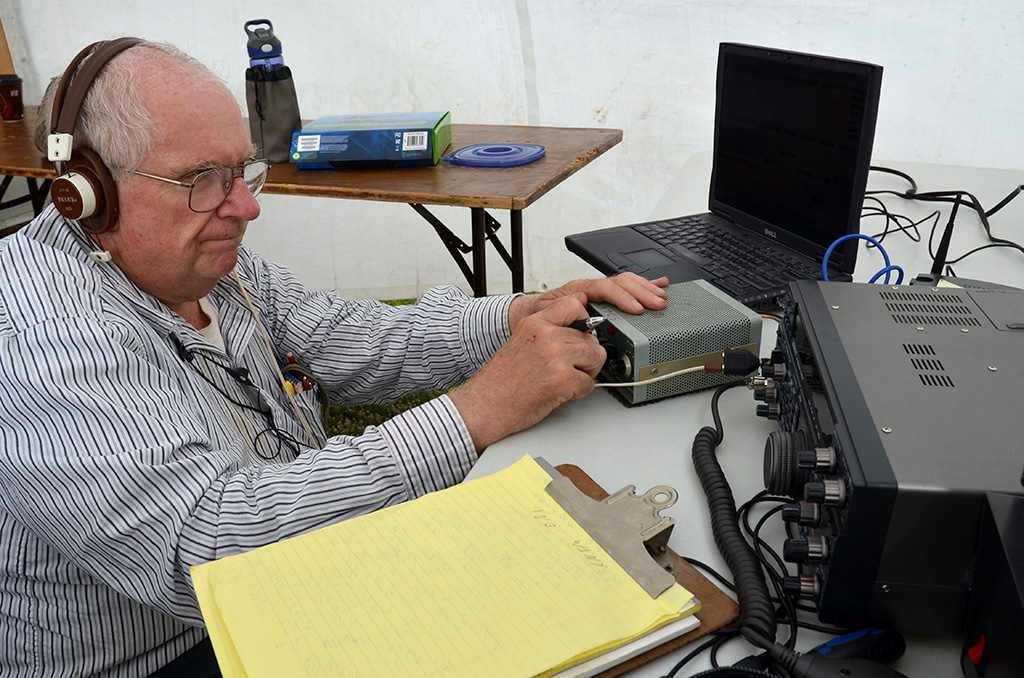 Adam, KC9VIO, running voice and data on his Kenwood TS-450.

On the air we ran with the callsign W9NA. Once held by A-1 operator Reno Goetsch, the club was fortunate to acquire the callsign after he passed away in 2005.  Reno was an original member of the club, signing the charter back in 1934 at the age of 19! As this is 80th anniversary of the WVRA, and since the club participated in its first field day back in 1934, it was only fitting to use his call.

Operating a radio at Field Day always seems to be a secondary pursuit for me. As the club president, I’m often called to greet guests and visitors, talk to the media, troubleshot problems, and help get other members on the air. Although this year I did have the distinction of getting our first contact at Field Day. Just minutes after the event began, I was demonstrating making a contact to a news reporter and snagged W1AW/9 as it operated 9E from Illinois. I had to finish the interview, so I yielded the radio to someone else. 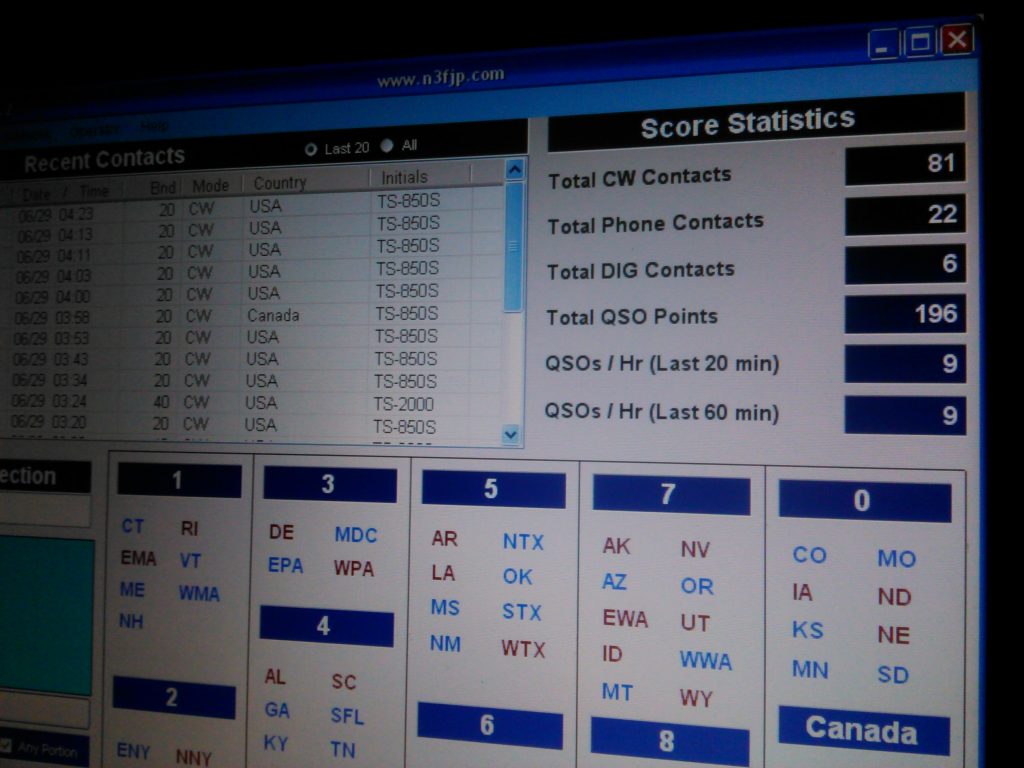 Our log before after the CW were done and before the overnight crew started their voice rampage.

What was notable this year is that two guys brought their keys and actually worked CW for an extended period of time, racking up 82 contacts. By Saturday night we had four times as many CW contacts in our log as voice contacts- a long time first for this club. But that won’t hold for long as I was getting ready to run the overnight shift until my replacement was to show up at 2:00am. But, I would soon find out how wrong I would be.

The forecast called for rain. As the field day weekend approached, we watched the forecast closely, made plans in case of rain, and hoped that things wouldn’t be as bad as the weather service was predicting. Much of Saturday, the weather was hot, albeit breezy. We had staked our tents so that they could handle the southernly breezes we were getting all day. 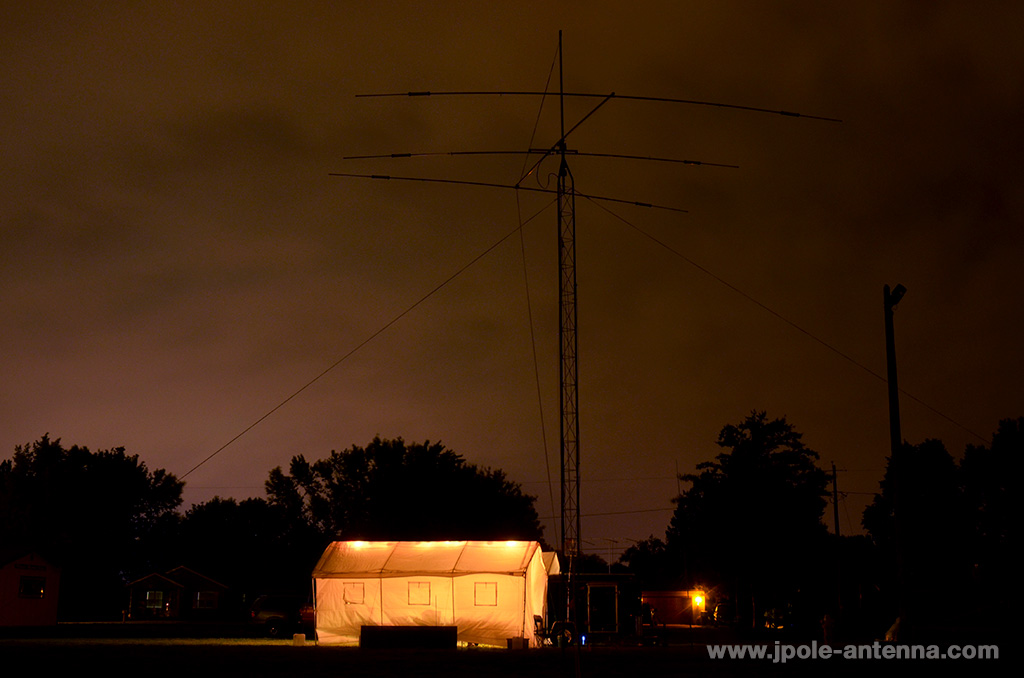 Calm before the storm? A late evening shot of our Field Day setup.

As the evening approached, we were watching the weather radar on our phones and computers. We knew the rain was to come. A long line of storm cells had formed along the Minnesota-Wisconsin border and it was heading our way. Watching the storm closely, it was losing it’s intensity and we figured that by the time it would hit us we would just have a good soaking rain. But at approximately 12:30am our luck changed. All day the wind has been out of the south and southeast, blowing at 10-13 and gusting up to 22 mph. We had guyed and secured out carports so that they were well secured along that leading edge. But as the storm hit us, we received a strong 37mph gust out of the west. 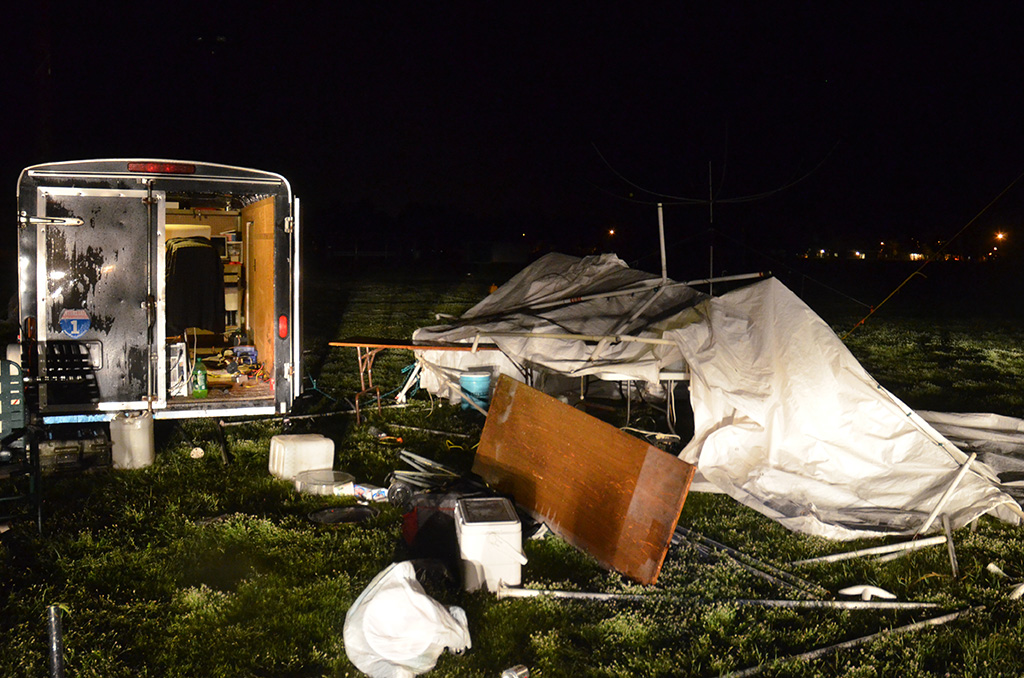 Post storm carnage: Tents collapsed and equipment strewn after we were hit by a rogue wind gust.

This gust filled out carports, picking them up and flipping them over. Since they were tied together and tied down along the other side, the one carport managed to flip itself on the other one, smashing them both and flipping tables. Equipment was getting drenched, lights were flickering, power cord were everywhere. The four of us still at the site quickly sprang into action. First my turning off power supplies and trying to cover equipment. As the carport hovered on its end, we got the major pieces of equipment secured in a trailer and then proceeded to quickly dismantle the tent so that it wouldn’t roll with the next gust and take out a tower. Fortunately we got the site secure, although we were soaked to the bone. 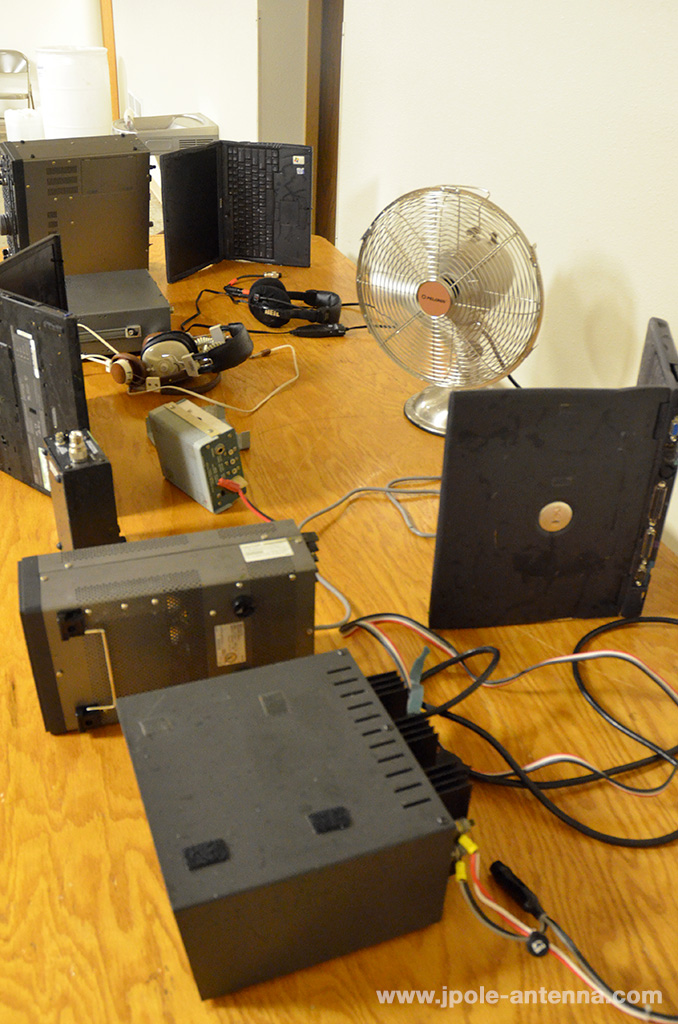 Our next priority was to dry out equipment. If we were to get back on the air at any point in time, we would have to clean and dry our radios and computers. Wet equipment was shuttled to the enclosed shelter building and fans set up to dry out the radios and computers. By then it was 2:30 in the morning and we decided to get some dry clothes and rest for a few hours while things dried out. 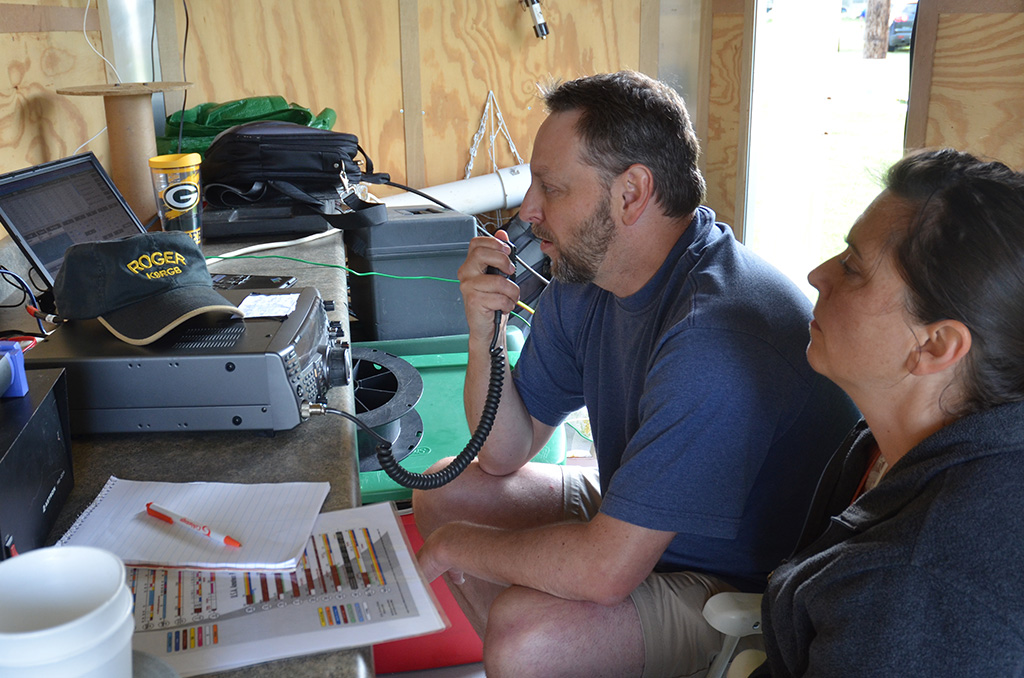 Down but not out: Sunday operations moved into the Club’s equipment trailer.

Sunday morning began with a great breakfast. Our overnight guy that was to relieve me came at 6:00 and made breakfast. Our rigs didn’t get as wet as we anticipated, so they went back on the air. We had a spare computer that was still dry, so our station was back in action. Fortunately our logs were held on a file server running on a Raspberry Pi computer in a sealed box away from the canopy catastrophe (hooray for the mesh). Once we got the computers reconnected on the mesh network, we were good to go. As a couple of guys worked a few more morning contacts, the rest of us sorted through and cleaned up the mess. The storm may have slowed us down, but it didn’t stop us dead.

This is definitely one of the most memorable Field Day experiences I’ll ever have. But even though our operations were cut short, we did accomplish several significant items, including: 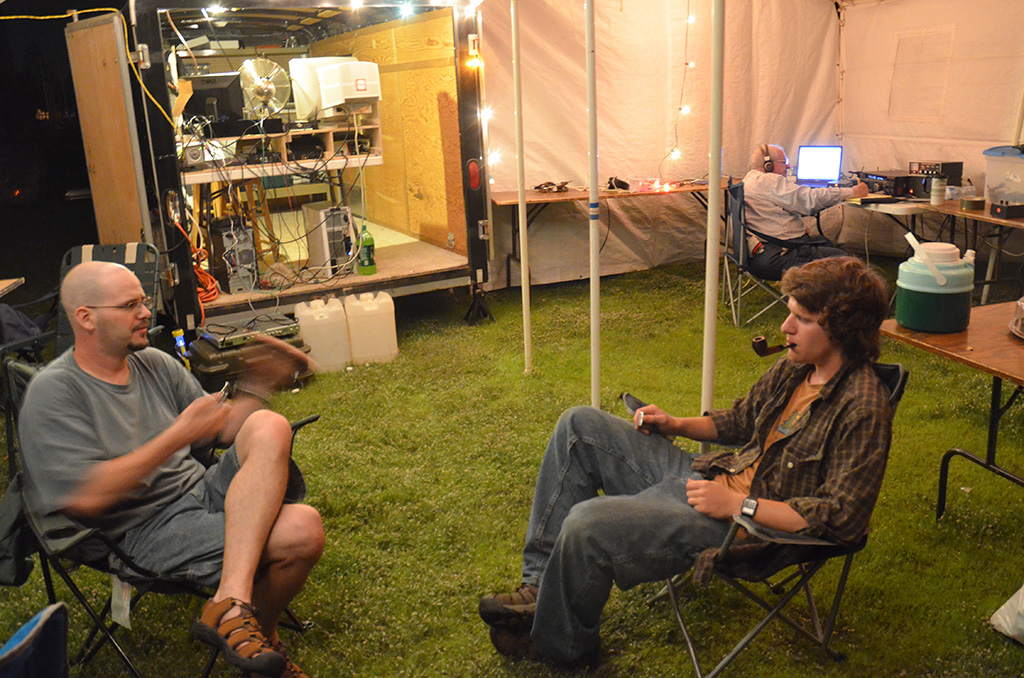 My favorite part of Field Day: The overnight crew. Activities calm down and you can take the time for conversation and working the bands.

How did your Field Day go? I’m sure the weather wasn’t as exciting, but I’d love to hear about your experiences. Please feel free to leave a comment below.