First off, I’d like to thank all my viewers, and especially the subscribers that helped push this channel to over 20,000 subscribers. I’ve grateful for your support. Be sure to stick around to the end of this video as I’ve some news on upcoming videos, live appearances, and another upcoming live-stream. In the meantime, we’ll answer some questions that came up in the last month. So starting out:

Most of the questions for this month were generated from my recent video of the Field Test of the Retevis RT97 portable repeater. It was also great to hear so many comments from fellow bicycling hams. The season is winding down, but maybe I can get another ham radio cycling related video in yet this fall.

First off, Lee asks: What are the legal requirements with being a portable? This looks a great piece of kit for portable stuff. Great video thanks for sharing

In my previous video on the RT97 I do talk a bit about some of the legal issues concerning this repeater. But in reality there isn’t really anything different you need to do with a portable repeater as compared to a stationary one. The biggest concern would be frequency selection, but most state and regional repeater councils have a pool of itinerant or shared non-protected frequencies. These frequencies are set up so that you can deploy a portable repeater without interfering with any coordinated repeater. Just remember that these frequencies are designed for temporary use, so if you find your portable repeater is now on the air permanently, please get it coordinated.

JK asks: isn’t the limitation the HT in this test? The advantage is multiple radios, with repeater in the middle.

Possibly. The purpose of a repeater is to provide one to many communications to a set of users that might not otherwise be able to communicate point to point. I could have done the test with multiple people. Doing so, I would be able to measure a total distance between Points A to B to C. But I my goal of the test wasn’t to show the total possible distance I could achieve with two handhelds and a repeater, but instead wanted to hear the quality of my own transmissions from preselected distances in an objective manner. Doing so allows to be infer what kind of total range I could expect.

Which, in that vein, Liberty4Ever says: A seven mile radius implies over 50 square miles of coverage. Not too shabby for a 10 watt portable repeater in a box connected to a mobile whip on your car and a handy talkie. 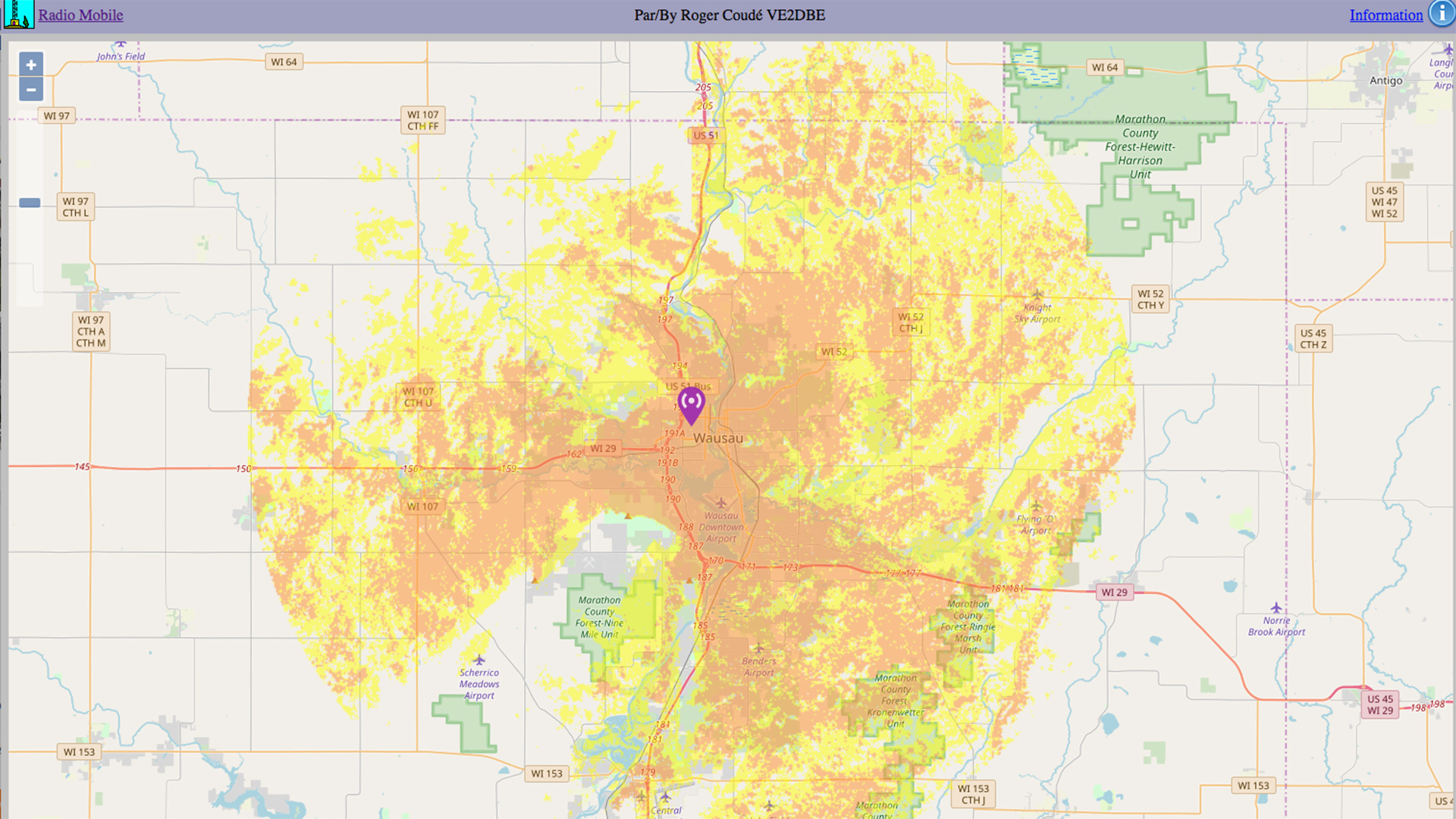 That’s a reasonable assumption to make. Of course coverage will be terrain dependent and if you get into a low spot or behind a hill, your signal quality will really suffer. I did a rough projection of the repeater’s coverage using Radio Mobile and you can see that it would potentially cover the entire city, but you’ll also notice that the projection isn’t fully circular as to the north and west there are hills that block the signal.

Another question, humaxf1 asks: Thanks for the field test. Can you elaborate on the handheld to laptop connection with the BTECH APRS-K1? Does the laptop have a shared socket for audio out and in?

This cable has popped up in a couple videos, but I’m surprised that I haven’t done a video on just this cable. The Btech APRS cable is handy for connecting your handheld to a smartphone for APRS or other VHF digital modes. It has a TRRS plug on one end and a Kenwood style two pin connector on the other. I’ve used this cable so I can turn my phone into an APRS tracker, and I was pleasantly surprised when I plugged it into the combined headphone/mic port on my laptop that it also worked. It’s really a cool little cable and I recommend anyone interested in APRS to pick one up as it makes it so easy to get started on it. 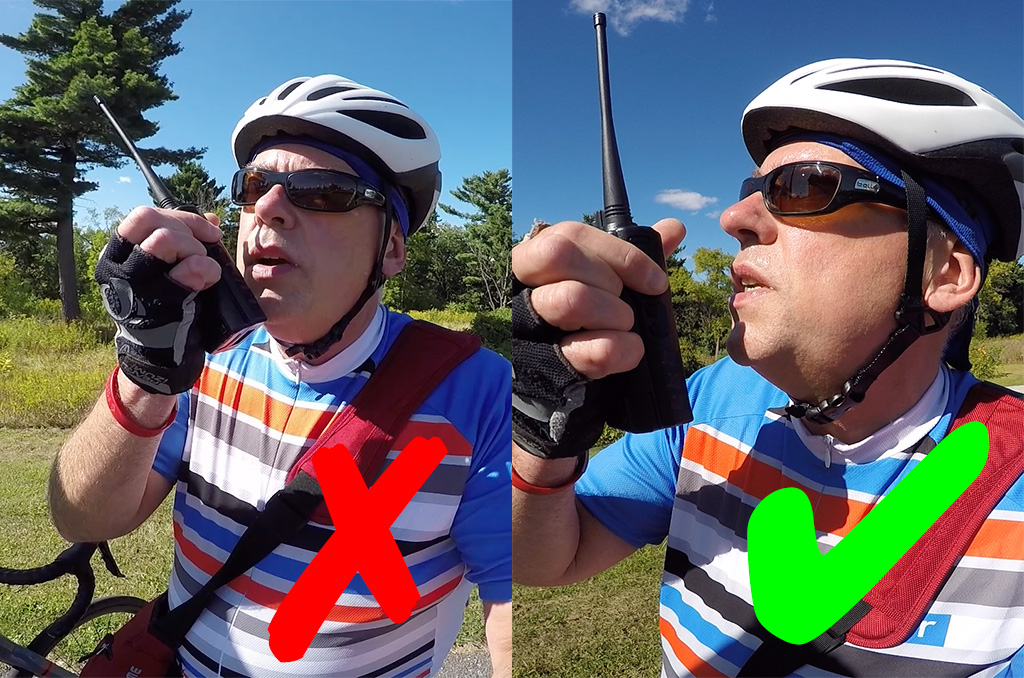 I looked at the original video footage from the seven mile test. I made two test transmissions at that location, the first was quite choppy as I held the radio askew and was pointed in the wrong direction. For the second I did reorient myself and hold the radio more upright. Let’s listen to the two return transmission. This is an excellent example of how you hold your radio can make a big difference fringe area signal quality. So moral of the story is, hold your radio upright, get it off your belt, and position yourself so you can deliver the best possible signal.

Moving on. In the video on measuring coax a nearly the speed of light, some of our viewers caught an error and we need to make a correction,

David points out: Electrons and most subatomic particles don’t travel at speed of light in a vacuum. Certainly photons do, maybe all particles with no rest mass – but point being that most don’t. Photons just do without effort, other particles such as electrons have to have lots of energy applied to them to even get close, but can never quite make it. 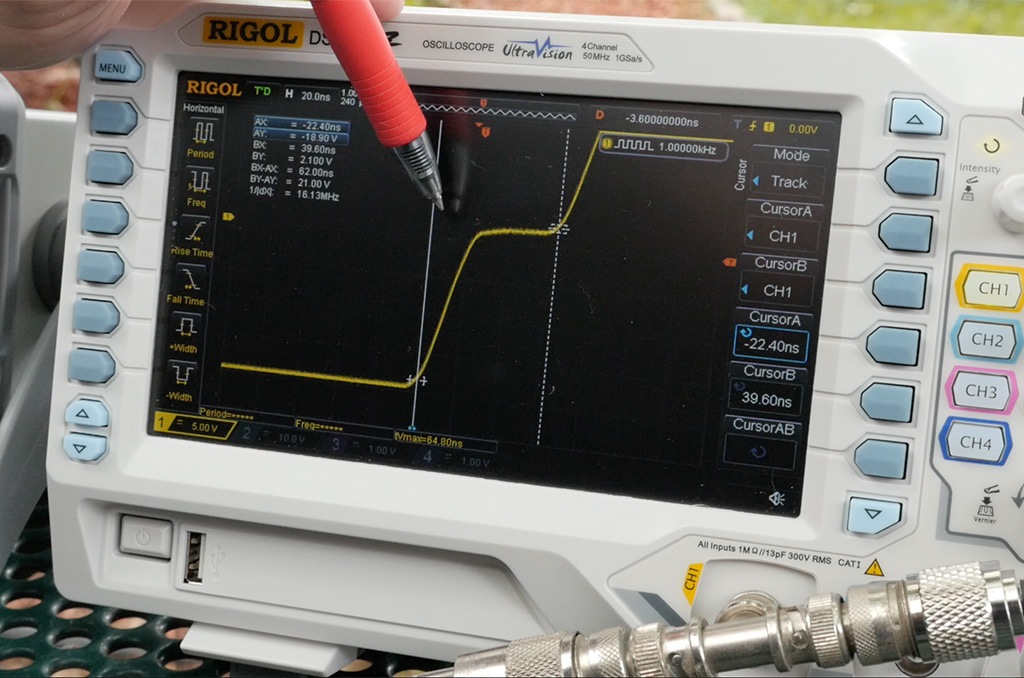 And you are correct. Electrons themselves move quite slowly and it was Joe’s intention in the video to say electromagnetic waves. Those do move at up to 99% the speed of light. Thanks for catching that error.

Also, Benjamin asks: Was the end of the 25′ tested coax terminated with an open, short or 50 ohm dummy load?

We didn’t terminate the cable at all, it had an open short at the end. One of the purposes of a time domain reflectometer is to catch cable faults or breaks in the line caused by a open short. A 50 ohm terminated cable would show an infinite length to the TDR. Additionally, as Seven O’Seven states: With the setup you have you can see if old coax is still 50 ohms by adding a variable resistor to an so 239 chassis connector. By turning the variable resistor you can eliminate the reflected wave displayed on the scope. Then remove the variable resistor and measure the ohm value. It will tell you the impedance of the coax. 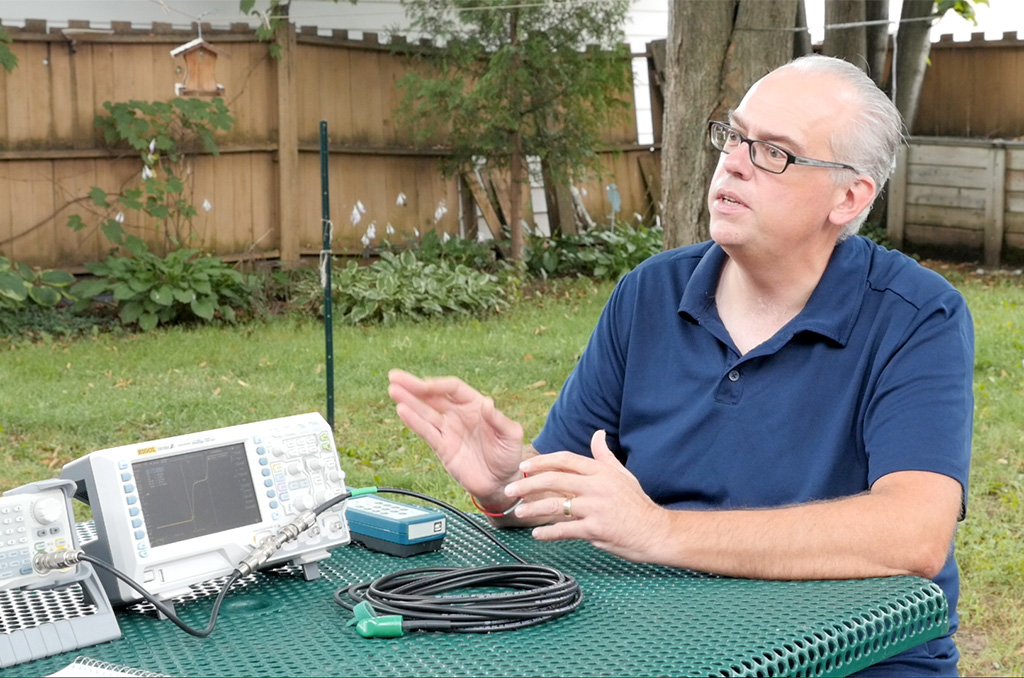 That’s a really smart trick, thanks for sharing.

From our August Livestream, Alan asks: What is 2 Meter Calling freq for Simplex D-Star in USA ?

To my knowledge there is no official calling frequency for D-Star. It appears that 146.580 is used in some parts of the US, but in using that frequency you may run afoul of FM analog users in some regions. I saw that Fusion users are trying to establish 145.5625 as their simplex frequency. This is in the 2 meter digital/packet portion of the band, and may be a better spot for all digital voice users like Fusion, DStar and DMR. It takes a lot of work to establish a nationwide frequency as you need general support and acceptance from the various digital communities to use a certain frequency. My advice is to check some of the Dstar forums and user groups to see where other simplex operators congregate and work as a group towards using a common frequency.

And with that question, this leads me into thanking everyone that tuned into the Live stream last month. It was a grand experiment and totally exceeded my exceptions. I’m working on producing another live stream event, and will announce that date shortly.

To round things out for this month, in addition to planning another live stream, you can look forward to a video on cross band repeating. I should have another product review coming up, and maybe even a hamfest video. I’m planning to attend the Milwaukee Ham Radio Outlet’s Superfest on September 28 and will have a table at the Chicago FM Club’s Radioexpo In Belvidere, IL on September 29. I’ll be in the indoor area with my VHF/UHF antennas for sale, so look for my pop-up banner. Links for those events are in the video description below. Hopefully I can catch up with some of you at either of those events.