First off I want to thank everyone for watching and subscribing to my channel over on Youtube. In the last month it passed the milestone of the one million video views mark. We’re also pushing towards 15,000 subscribers, so if you enjoy watching these videos, you are certainly in good company.

Next up, before I dig into the questions, I want to chat a bit about my previous video which is on the ARRL’s recent petition for rule making to expand HF privileges for Technician license holders. I’ve been a ham for 20 years and have survived both the license restructuring of 2000 and the dropping of the morse code testing requirement in 2006. It’s no surprise to me that this proposal would bring out vocal and highly polarized opinion. I did a rough count of the over 200 comments left on this video and found, despite the few troll comments, most are generally in favor of this proposal with an 85% approval rating.

There are so many comments that I’m, only going to pick out two and I recommend that you peruse through the rest of them, because I am really pleased on how thought out and cogent almost all of them are.

But I think Freddy hits the nail on the head on why this proposal is important.

I feel it is a very positive change with the new privileges the Tech. will become more active and stay and/or progress in class. Plus the growth in the Service is a necessity! We just experienced a true Emergency Situation on 10/10/18 where the Amateur Service proved to be the only means of communications the our hard impacted area had for communications period and that included the Government assistance agencies for several day. So in short more Licensed Operator at any level would have been a GREAT ASSET! Sincerely K0LC

One of the purposes of amateur radio is to provide emergency communication in a time of need. Our statewide ARES/RACES group has a very nice linked repeater system, yet it’s dependent on VOIP technology to stay online. We’re finding that in a true disaster situation that HF is a better solution for regional communication. Having Technician class license holders with the ability to communicate on 40/80m NVIS would truly be an asset.

Now there will be those that will say that in a true stuff hits the fan emergency that licensing won’t be an issue as anyone could transmit on any frequency. I’ll argue thats a wrong statement and not accurate in the letter and spirit of the emergency provision. Plus that mentality does nothing to train or prepare a person to operate in that manner.

Moving on, I received a couple different questions on the same subject, Gerald asks:

The other item that needs addressing is the renewal policy for expired licenses. The FCC should allow anyone who has passed any of the exams to re-enter service at anytime. We should be doing everything to keep our numbers. There is a lot of upcoming technologies out there. Allow expired technicians to pay their money to rejoin regardless of when their expiration date was.

That provision actually exists. Since 2014 an amateur can reclaim their expired license by passing the current Technician exam. So if you were previously a General or an Extra and let your license lapse, passing a technician exam (and supplying proof of the previous license held) will grant you your old license class. I think that’s a pretty good compromise to the expired license situation.

On my recent Introduction to DMR presentation, I received this question from Christopher

Being a truck driver and not always in a good spot for a repeater do you absolutely need a repeater or can it be done thru a hotspot device?

Some hams, especially in areas that may not be served by a DMR repeater, are using their hotspots on a MIFI link. As long as you receive a cell service signal, you can have access to the network talk groups. But there is one caveat, as your phone’s data plan will need to support that use, an active channel could use 3-6 megabytes an hour, but I believe with average use your data should be under 1 gigabyte a month. So this would be an excellent option for the over the road driver.

On the Chameleon P-Loop review, Carl of Chameleon Antennas gives us a couple of tips

First off, on tuning the antenna with an analyzer, he says: do not hold the antenna analyzer when tuning. Put it on the ground because you hand touching it will influence the SWR.

Also, the Chameleon P-Loop, while having a very low takeoff angle in its default configuration, Carl mentions that it also can be used for Near Vertical Incidence Skywave propagation.

In order to use the P-LOOP 2.0 for NVIS – you’ll need to rotate the antenna on the side (while having the telescopic mast installed horizontally) in order to increase the radiation upward for 40M.

Thanks for providing those tips.

You should do a video on a good cheaper HF vertical antenna.

For that I’d recommend the Wolf River Silver Bullet coils. You can put together a coil and whip for under a $100. I have one myself and did a review last year.

And finally, a few questions about the Power pole splitter project I recently did.

The National Electrical Code (NEC) does not recognize soldering as a allowed connection. It can come apart in high current situations. Crimping is much better. Thanks for this video. This kit and tool will be part of my arsenal…soon!

That is correct. A proper crimp connection is better than a soldered one. That’s one of the reasons why I don’t solder electrical connectors.

Next up, Reggy’s got the mnemonic for remembering how to orient your powerpoles:

Red Right, Tongue Top, thats what i have memorized.

And Mark admired my battery in the background of the video.

You left out one little detail which admittedly is off the subject. And that is the battery in the background.

I was also interested in what you did to connect to the battery terminals.

Thanks for noticing the battery. it’s a U1 sized 12 volt Lead Acid AGM battery that I purchased at Fleet Farm (an upper midwest farm supply store) I used a couple of ring terminals that I crimped to a short piece of zip wire. Of course a power pole connector is on the end for easy connection.

And finally, Scott wrote in with a question about making a purchase decision between two radios.

Great video. I am kinda between going with a Icom IC-718 or a ICOM 7300. It’s not such a money decision, its more of do I want simplicity or all the high-tech bells and whistles. Any opinions ? 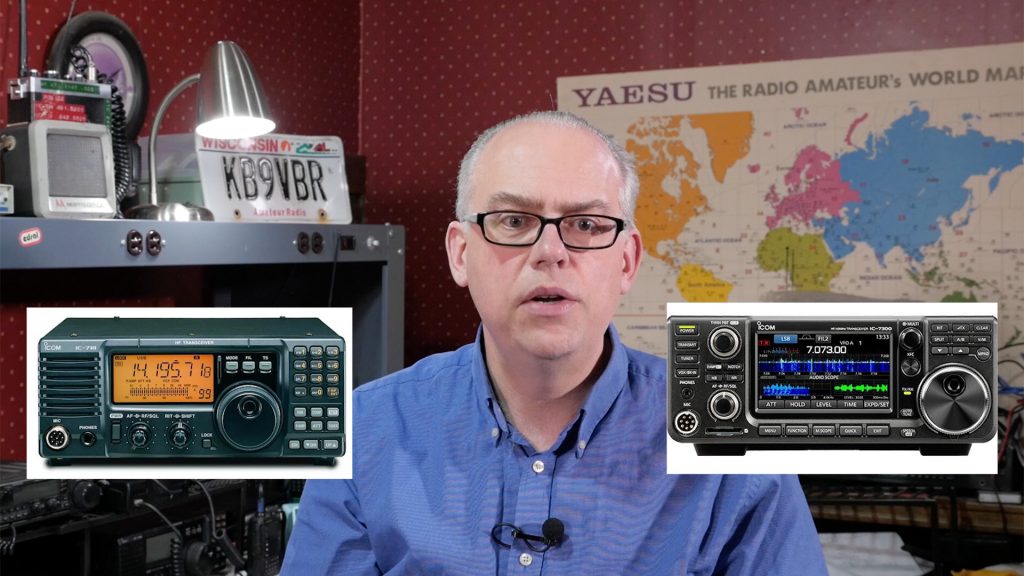 Good question. I think it’s hard to compare the 718 and 7300 as they are of two different technologies from two different generations. There are a lot of features on the IC-7300 that would be either considered top of the line or unavailable when the IC-718 was introduced. But with that said the IC-718 is very simple to operate. I can sit a ham down in front of it who has never operated HF before and get them on the air in five minutes or less. Plus I know they won’t get lost in menus or settings and totally screw the whole thing up. Transmit audio is superb, receive is sensitive, and it will run full duty cycle all day long. What the IC-7300 brings is a sophistication in filtering and digital signal processing, plus full support of digital modes with its built in sound card/interface. To work digital I had to add a Signalink to the IC-718 which is a $100 expense. Plus the 718 doesn’t have a tuner, but that’s not a big deal as you’ll want an external tuner with either radio anyways. I think the downfall of the IC-718 is that the DSP is on the AF stage, so when the bands are noisy it can get weary to listen for long stretches, nor does the IC-718 have 6 meter support.

Final word, If you want a simple, bullet proof rig, go with the IC-718. If you want the sophistication of a modern SDR based transceiver, then the IC-7300 is for you.

Do you have any questions or comments? Please leave them below, I’ll pick out the best for my next Your questions answered video.