I’m a bit of a 220 aficionado, but decent 220 equipment can be hard to come by. The 1.25 meter band has some unique properties, blending the propagation advantages of the 2 meter and 70cm bands. So 220 radios and repeater systems tend to have better range and coverage than similar VHF and UHF systems. With that said, I was excited when Radioddity approached me to take a look at their new handheld, the Baofeng UV-5RX3. The UV-5RX3 is a triband radio with coverage on the 2 meter, 70 cm, and 1.25 meter 222 Mhz band.

By all respects, the UV-5RX3 is like any other Baofeng UV-5R series radio. It was a familiar case design, although the Radioddity version adds some snazzy trim. But it has the standard list of features including:

New to this radio is the triband function with operation which includes operation on the amateur 2 meter, 70 cm, and 1.25 meter bands. That’s great news for 220 lovers like myself, but there is a bit of a caveat. While the radio will work on three bands, the stock antenna will not. So Radioddity includes a separate 220 antenna in the box and you will have to switch out the dual band antenna for the 220 antenna if you want to work on that band. Both of the antennas look quite similar, so you need to look at the bottom to see what band each antenna is for. This is kind of goofy, so I picked up a Nagoya NA-320A triband antenna. The Nagoya is a great aftermarket antenna, but at 17 1/2 inches long, it’s kind of unwieldy for this diminutive radio. But I think us 220 users are used to inconveniences like this, so it’s not the worst thing in the world.

What’s nice about Radioddity’s Baofeng UV-5RX3 radio is that since it has the same form factor and case as other Baofeng radios, it’s compatible with all the accessories such as the programming cable, speaker mics, earpieces, and high capacity batteries. That’s kind of nice, cause if you have multiple Baofeng radios, you can use the same charger, saving space on the shelf.

Programming the radio is pretty easy. You can download the UV-5RX3 programming application from the Radioddity site, or better yet, use Chirp to the program the radio. I went the Chirp route, plugging in the radio, reading the program file from the radio, and then cutting and pasting the frequency list from one of my other radios into the UV-5RX3. With a couple of quick edits for the 220 band, I was on the air in no time.

And on the air controls are the same as any other Baofeng radio. The buttons are in the same location and operation is similar to every other model. That’s good news as if you’ve used a Baofeng, this radio will feel comfortable in the hand. 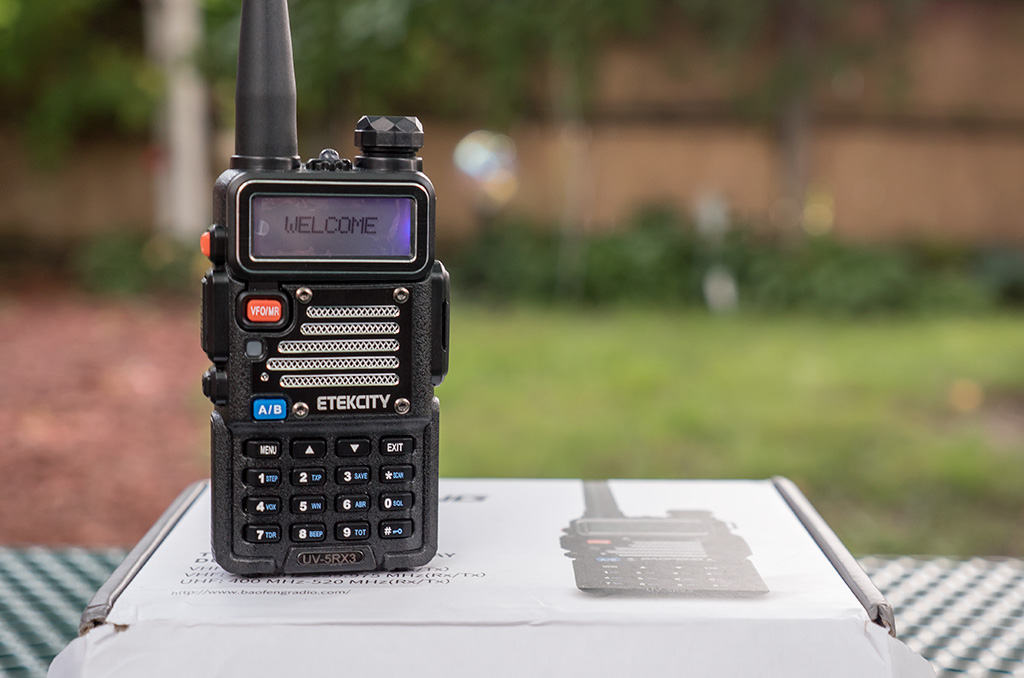 So lets get down to the good and bad:

The good is inclusion of the 1.25 meter 222 MHz band. The 220 band needs more operators on it and this radio makes getting on this band accessible and affordable.

Also good is compatibility with most all other Baofeng accessories, batteries, and charger.

Finally, it’s great that the radio can be programmed with Chirp, getting you on the air faster.

The radio only has 128 channels. This may not matter for most people but you can sure fill up those channels fast if you travel or live in an urban area.

Speaking of urban areas, the radio is more susceptible to interference as it uses direct RF sampling receive which lacks the filtering you’ll find in a superheterodyne receiver. But that’s a shortcoming of all these Chinese radios.

Also, you need to swap antennas for the 220 band.

So, final word on the Radioddity’s Baofeng UV-5RX3 is that this is an affordable radio and I’d recommend picking one up just so you can get on the 220 band, especially if you have a 220 repeater in your neighborhood. As for myself, I’m going to add this to my trailer kit so that I have a 2nd radio when I travel, and with it having 220 is only a bonus.