Your Questions Answered and a Channel Update for December, 2017

I’ve collected another batch of viewer mail over the last month. Thanks for sending those comments and questions. So for the benefit of everyone, today I’m going to pull out a few great questions and do some follow up.

Also at the end I make a couple of announcements, so please stick around to the end of the video.

In the video Tape Measure Beam Antenna, I received the question: anything wrong with the idea of using terminals on the coax ends, and drilling holes in both of the driven element halves and using a small bolt/nut to secure the coax, tape driven element and the hairpin match?

The video shows me soldering the the coax and the hairpin match to the driven element of the antenna. If you don’t have a soldering iron or don’t wish to solder, you can certainly make that connection with a nut/bolt combination. I’d probably also add a little star washer to the nut to better grip the wires and keep them from pulling out.

In installing the KB9VBR J-Pole antenna, I’m asked: should the ferrite beads get sealed too? 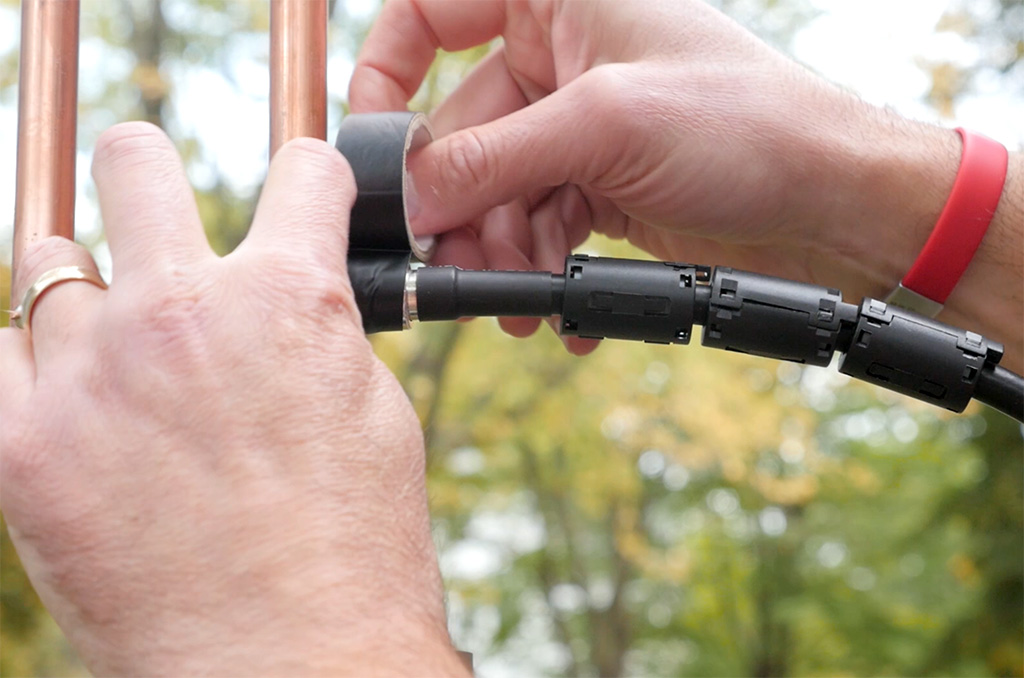 That’s a great catch. In the video I wrap the area with electrical tape where the coax connects to the feed point, but I didn’t wrap the ferrites. I’d certainly either tape up the ferrites or use some heat shrink tubing to protect them from the elements and keep them in place.

My video on Baluns and chokes generated a conversation about G5RV antennas. The G5RV is a multi-band antenna consisting of horizontal dipole elements and a vertical ladder line component. The ladder line then terminates to a coax connection, and that coax cable is brought to the transmitter. The question is: NORMALLY a G5RV antenna is supplied with “Ladder-Line as a feed line” IF you install a 1:1 balun. It has a SO-239 Coax connector. Can you connect the coax directly to the BALUN? Is the ladder line now useless? 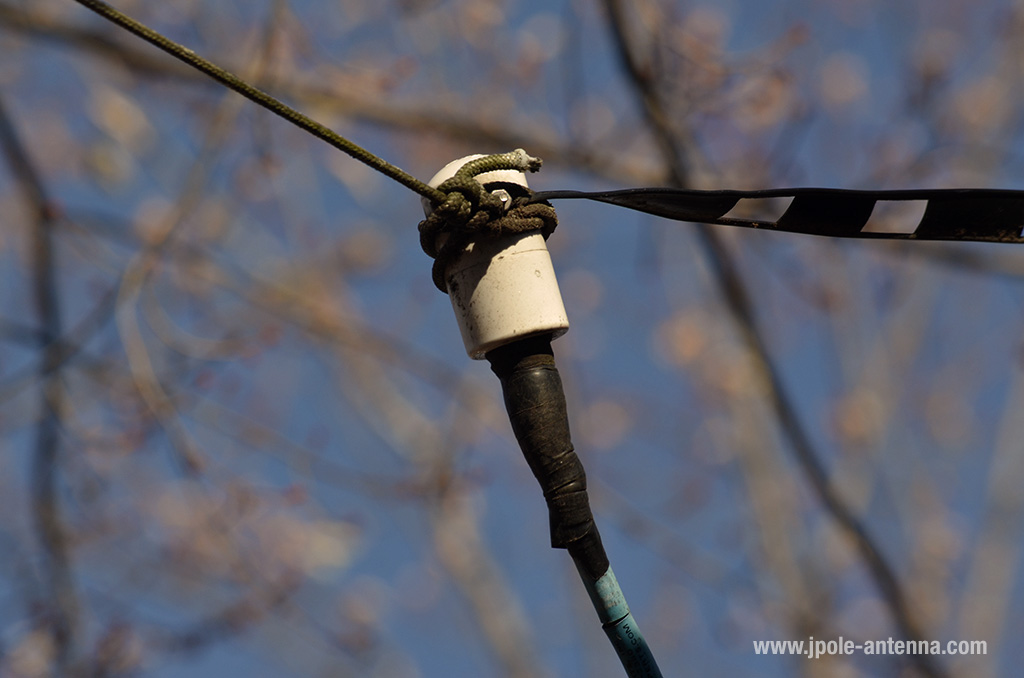 I could do an entire video on the G5RV as it’s a popular yet somewhat misunderstood antenna. With a G5RV antenna, the ladder line is not used as the feed line, but is actually part of the antenna. With a full size G5RV the dipole elements are resonant at the 20 meter band. At the lower frequencies the ladder line begins to radiate. That’s why the ladder line is cut to a specific length. At the end of the ladder line should be a 1:1 current balun where you attach the antenna to the coax, but many inexpensive G5RV kits don’t supply that. So if your G5RV doesn’t have a current balun at that transition point, I’d either add one or make a simple choke balun with several turns of coax. You can’t attach the ladder line directly to the tuner as that could introduce RF into the shack. An finally, G5RV antennas do require a tuner. I recommend an external tuner for these antennas as the auto-tuner built into most modern transceivers doesn’t have enough range to use the antenna on the lower frequencies.

Last question. From my November Questions Answered video the question was asked: Speaking about higher ham licenses by the FCC, isn’t there an “Experimental” license? Thanks for the great video as usual! Another question is, how old is the youngest radio enthusiast you know of?

The FCC announced earlier this year an experimental program license. This license is designed primarily for a specific research program using radio technology. So you’ll need an idea or plan that uses a particular frequency in order to get the license. I recommend heading to the FCC website for more information. The link is in the video description. 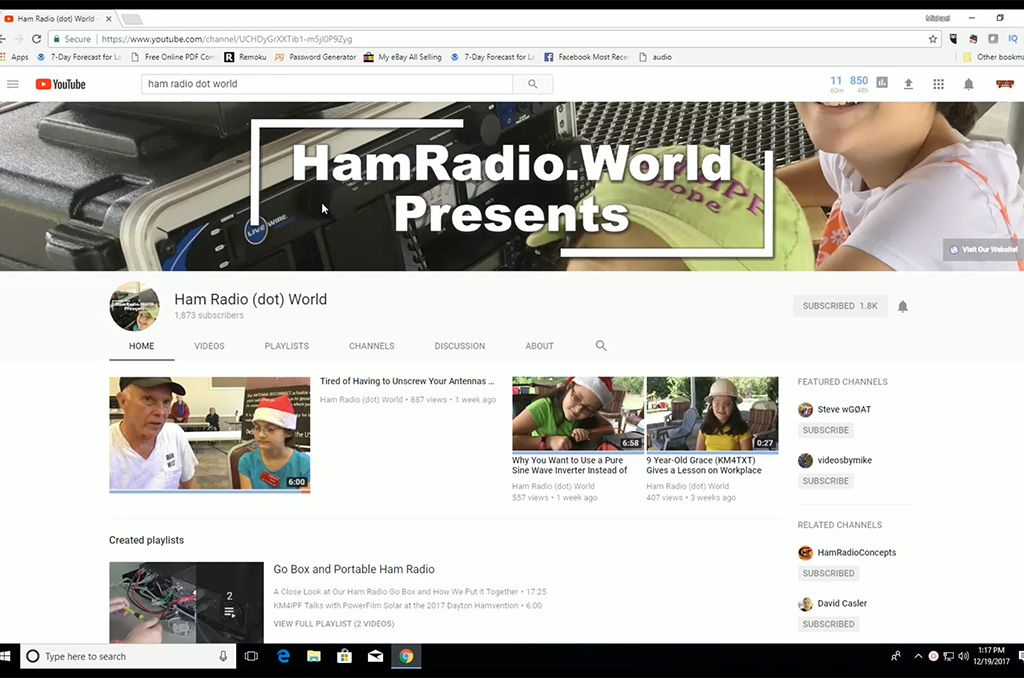 As for the second half of the question, my daughter was 13 when she got her license. I’ve also helped some Boy Scouts of about that age get their license also. But I know there are younger hams active in amateur radio, which brings me to this month’s Youtube channel highlight, were I recommend another Youtube channel you should check out. For some really young hams enjoying the hobby, the channel Ham Radio dot World features the ham radio family of Zechariah, Faith, Hannah, Hope, Grace, their parents. Those kids are having a great time on the air and I recommend you head over to their channel and check it out.

With those questions out of the way, I do have a couple other items to share. The Christmas holiday is fast approaching, so my next video will be my annual end of year countdown where I highlight the top ten videos and blog posts from the last year. Do you have a favorite? let me know in the comments below. Look for the top ten list to appear just after Christmas.

Next, up. I know my channel has a world-wide audience, but if you live within driving distance of Milwaukee, WI, I’d love to meet up with you. I’ll have a table at the Waukesha Mid-Winter Swapfest on Saturday January 6th, 2018. This is one of the largest hamfests in the state and despite being held in the dead of winter, is quite well attended. Look for my table with the large KB9VBR antennas vertical banner. Details on the swapfest are in the video description below.