Ham Radio Q & A is back with another episode. Thank you for all those questions, please keep them coming. IF you’d like your question answered on the show, please drop me an email at kb9vbr@jpole-antenna.com or leave a comment below this post. I try to answer all questions, and the ones with a wide interest will be featured on an upcoming Ham Radio Q & A show. 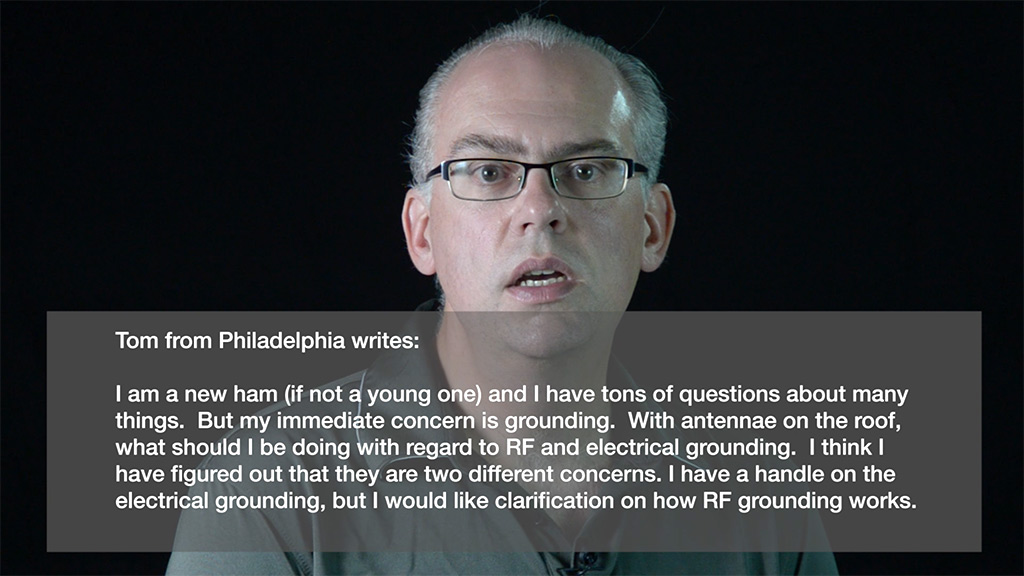 I am a new ham (if not a young one) and I have tons of questions bout many things. But my immediate concern is grounding. With antennae on the roof, what should I be doing with regard to RF and electrical grounding. I think I have figured out that they are two different concerns. I have a handle on the electrical grounding, but I would like clarification on how RF grounding works into the mix.

Thanks, Tom. Grounding is a big topic, so we’re going to break it down and address each part separately. First off there is your electrical ground. This type of ground is for safety in case there is a short-circuit or a lightning strike to your antenna system. The electrical ground carries that energy safely away, mitigating more severe damage.

Today we’ll talk about the RF ground, what it is and when it’s necessary. The purpose of the RF ground is to act as a reflector. It doesn’t radiate RF energy, but instead interacts with the antenna’s radiating elements by mirroring and reflecting that energy, creating a predictable RF radiation pattern. It also has a second purpose of providing the return path for RF current in unbalanced antennas. More on that in a bit

So the RF ground is important, right. Then why doesn’t every antenna require one? Well they do, but just not in a way that might seem obvious.

Take for example the 1/2 wave dipole antenna. This simple antenna has two 1/4 wave elements, each connected to a different side of the coaxial cable transmission line. One side carries the RF energy and releases it, and the other side provides the balance and a return path for the RF current. The dipole’s radiation pattern can be affected by it’s height above the Earth. There isn’t a physical ground plane, but the Earth acts as an RF ground. For an optimal earth ground interaction with the antenna, we’d want to hang our dipole at 1/2 wavelength from the earth ground. If we hang the antenna lower, the earth interacts with the antenna and causes the RF energy to be radiated more vertically. Lifting the antenna reduces the angle of radiation until we get to that optimum height for signal propagation. Going above the optimum height gives us diminishing returns in angle of radiation, so it isn’t too advantageous to go beyond the ideal height.

Now dipoles are a common style antenna on the HF bands. For example, on the 10 meter band, our dipole would be 16 feet long, 8 feet per 1/4 wave side, and it should be optimally mounted at about 16 feet in the air for the best angle of radiation. HF propagation relies on bouncing signals off the ionosphere, so this setup will work great for DX or long distance contacts. But if we were to make a dipole for the 2 meter band, using the same formula, our optimum antenna height would be little over three feet in the air. Since VHF propagation is line of sight and not ionospheric, such a low antenna would not be very effective.

So let’s take our dipole and modify it slightly for the VHF 2 meter band. Since the earth ground gives us diminishing returns as we increase the distance from it, we’re going to bring the RF ground with us. We’ll take the 2 meter dipole and make the radiating element vertical. Now we have an L shaped antenna. The radiation pattern is kind of lopsided, so we’re going to add some extra elements around the base of the antenna to even things out. We’ve just created the classic 1/4 wave vertical antenna.

While every type of antenna requires an RF ground of some sort, not every one needs a ground plane. Balanced antennas, based on the dipole design, don’t require a ground plane, this would include half wave antennas, J-Poles, Yagis, and beams. But unbalanced antennas, like the vertical 1/4 wave, 5/8 wave, and collinear styles do need a ground plane to function properly. The ground plane provides a return path for the Rf current- much like the other side of a dipole antenna does. That’s why you’ll see the horizontal radials at the base of these types of antennas. Want to learn more about balanced and unbalanced antennas? Check out my video on RF chokes and baluns for more information. Hint: click on the link above my head.

What about mobile antennas? They don’t have ground radials. Yes that is true, mobile whip antennas utilize the body of the vehicle for its ground plane. So when you slap a mag mount on top of your car, the roof becomes part of the antenna system. If you had a vehicle with a fiberglass or plastic roof, you would either have to use a half wave antenna that doesn’t require a ground plane or create a ground plane out of metal mesh or screen.

So to sum things up, the RF ground is an important part of the antenna system that controls the angle of RF radiation, and ground planes provide the necessary return path to the transmitter for the RF current. Not all antennas require an integrated RF ground, but most vertical antennas based on a 1/4 wave, 5/8 wave or collinear design benefit from the inclusion of a ground plane.