I’m gonna take a confusing subject and hopefully demystify it. Antenna Gain is a popular subject amongst hams. We talk about gain all the time, we’ll compare antenna systems and apply values to as how impressive they are by their gain figures. But what exactly is antenna gain, and what do those numbers mean to me? I’ll take a non mathematical look at antenna gain and how it relates to performance.

I’ll also answer some important questions such as: high gain antennas are better than low gain ones. Or the rubber duck on your portable has negative gain. What does all this mean? Is more gain a good thing? Can we really have negative gain? An finally, why we need to take all gain figures with a grain of salt.

Dipole radiator: is a half wave dipole antenna (1/4 wave on each side). Gain measurements referenced to a dipole will be lower than those compared to the isotropic since a dipole already has about 2.15 Dbi of gain.

Decibels: a unit used to measure the intensity of a sound or the power level of an electrical signal by comparing it with a given level on a logarithmic scale. A change in power by a factor of 10 is a 10 dB change in level. for every 3db increase on the scale, its power is doubled.

How does Antenna Gain work?

Say you take an antenna and connect it to your transmitter. For simplicity’s sake we’re going to use a VHF FM transmitter. When you transmit, there is a constant amount of energy that is radiated from an antenna. The antenna can’t create more energy or make energy out of nothing, but it can focus the transmitted energy, making it more concentrated. This concentrating or focusing effect the antenna performs is considered gain. [pq]The antenna concentrates the energy, so we gain more signal, range, or distance.[/pq]

The simplest type of antenna is an isotropic antenna. An isotropic antenna is a theoretical antenna that evenly radiates equal and evenly in all directions. Think of it like the sun, it’s radiation pattern is a perfect sphere, and it’s energy is ubiquitous and everywhere. An isotropic antenna is considered to have a gain of zero. As you add antenna elements, lengthen the antenna, or change it’s characteristics, the radiated signal becomes more focused, much like a lens can focus the sunlight and burn things. The lens isn’t make the sun more powerful, it’s just concentrating the energy at a single spot.

Isotropic antennas don’t exist in real life, we use them as reference points. Since gain is a relative measurement, you need a starting point for comparison. As we measure and rate antennas, we’ll use the term Dbi (decibels compared to Isotropic) to state our antenna gain figures. 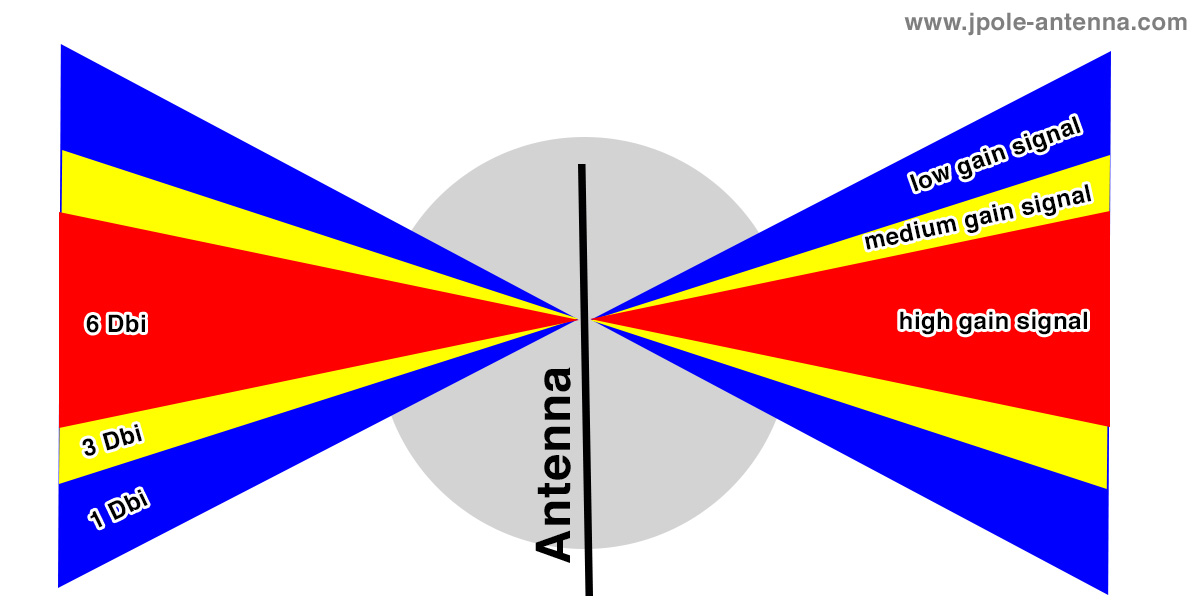 Let’s look at some common vertical antennas. A 1/4 vertical wave antenna will have a near spherical radiation pattern and a gain of 1Dbi. (1 Db advantage compared to Isotropic antenna) If we lengthen the element so that the antenna is now a 1/2 wave vertical, the antenna will begin to concentrate the signal and the radiation pattern will compress and look more like a doughnut. The gain is now about 3dbi. Adding or lengthening the antenna elements causes the angle of radiation to narrow, concentrating the signal onto a smaller point. Instead of signal going every which way, the energy is being concentrated near the horizon. The antenna didn’t make more energy, it’s just focusing the energy it was presented.

Gain with directional and yagi antennas works in the same manner. The driven element is typically a 1/4 wave dipole with a gain of 2.15dbi. If I add a reflecting element and a directing element that are spaced and sized to harmonize with the driven element, I’ll focus the energy and increase the gain to 5.5 – 7 db. Add more elements and the signal starts to turn into a powerful little pinpoint.

So after reading this description, you’d think the higher the gain of the antenna, the better. Right? Well, not exactly. Antenna gain is only part of the entire transmission system. You also need to take into account your antenna’s location, height, and average terrain. In fact terrain can be a big determining factor on what type of antenna you will want to select. High gain antennas work best if you are located well above average terrain or in a flat, spacious area. But if your are in an urban area, valley, or low spot, then a low gain antenna will be more appropriate. As the gain increases, the radiation pattern flattens out, concentrating more signal towards the horizon. A high gain antenna in the valley will just drive the signal into the ground or a low gain antenna on top of a mountain will and more energy to the sky than the horizon. Pick an antenna and gain characteristic that’s best for your location and terrain.

I heard someone say that rubber duck HT antennas have ‘negative gain’ What does that mean? Handheld radio antennas are designed for portability, so they tend to be quite small. Since most HTs are used on a repeater, their antennas don’t have to be very long to get the signal out. A two meter duck antenna is typically a coiled spring encased plastic. If you were to stretch it out, it would be close to 19 inches long, the 1/4 wave length for 2 meters. Since the antenna has the electrical length of a 1/4 wave antenna, the radio thinks it is a 1/4 wave antenna. But because of it’s diminutive size and electrical resistance, it actually attenuates your signal, resulting in a negative gain amount. Fine for getting into the local repeater, but you’ll never make distance contacts with it.

So why do we need to take gain figures with a grain of salt? Antenna gain is a relative measurement, so gain values can be misleading if the reference point isn’t disclosed. Antenna manufacturers will often state gain figures based on Dbi or Dbd, that is referenced to an isotropic or dipole radiator, but some will leave the designator off, leaving you to wonder about the antenna’s actual capabilities. If you are unsure about an antenna’s gain characteristics or capabilities, ask the manufacturer to describe the style or style of antenna it is. A half wave antenna is a half wave antenna. If someone makes an claim that an antenna has ‘6 Db of gain over a J-Pole antenna’, then they really don’t understand how gain works.

Antennas decisions shouldn’t be made just by gain figures alone. Nor will a higher gain antenna be the best choice for your situation. I had a customer that purchased both a Slim Jim and a J-Pole antenna. He did some comparison testing and found that the J-Pole works better at his location. The reason? He lived in a valley and found that the J-Pole’s more even radiation distribution did a better job at getting the signal out from his location. I’m sure if his station was at the top of a hill, the Slim Jim would be the clear winner.

Have you found that antenna gain, either low or high, makes a difference at your station’s location? Why not share your experiences in the comments below.