There are two operating events that I seldom miss. One is Field Day, and the other the Wisconsin QSO Party. Always the second Sunday in March, the airwaves above the State of Wisconsin become alive with activity. I love the Wisconsin QSO Party because it’s like a family reunion on the air.  With so many callsigns both familiar and new, it’s easy to make new friends and reacquaint with old ones.

With that being said, I actually am a pretty casual operator. Time constraints and other commitments can make it difficult to get on the HF bands with any amount of regularity, so I’m usually pretty pleased with my modest number of contacts and score I receive from the annual event. Last year I had 176 contacts and tallied over 10,000 points in the event. This year, the final score was a little lower with 123 contacts and 7,011 points. Not for a lack or trying, I think band conditions weren’t as ideal as we saw in last year’s event.

The contest started out slow for me, the first hour was mostly hunt and pounce as I cruised up and down the 40 meter band. After about racking up 23 contacts, I found a clear spot at 7282 and started calling CQ. Being near the top of the band usually doesn’t garner the biggest pileups, but after two or three calls,[pq] I got a contact. Then another, and another. Before you know it, I’m picking calls out of the mess [/pq]and working the pileup as quickly as I can. 30 minutes later I take a break, sitting at just under 50 contacts.

During the contest, I’m doing a little multi-tasking by cooking up a batch of pork spareribs on the grill. We had such a cold and brutal winter, so Sunday March 9th was an an absolutely beautiful snow melting 40 degree outside. Why not celebrate with some grilling. Plus, I can’t sit and call CQ for two hours straight, I’d rather take a break, search around and find another frequency to sit.

45 minutes later I’m back at it. More hunting and pouncing on 40 meters and racking up another 20-25 contacts. I find a clear spot on 7258 and call again. Right away I’m swamped with activity and rack up about 30 contacts in a short thirty minutes. After working this, it gets a little crowded with noise and QRM. My trusty Icom IC-718 doesn’t have the latest and greatest in digital signal processing, so I take another break to work on dinner. 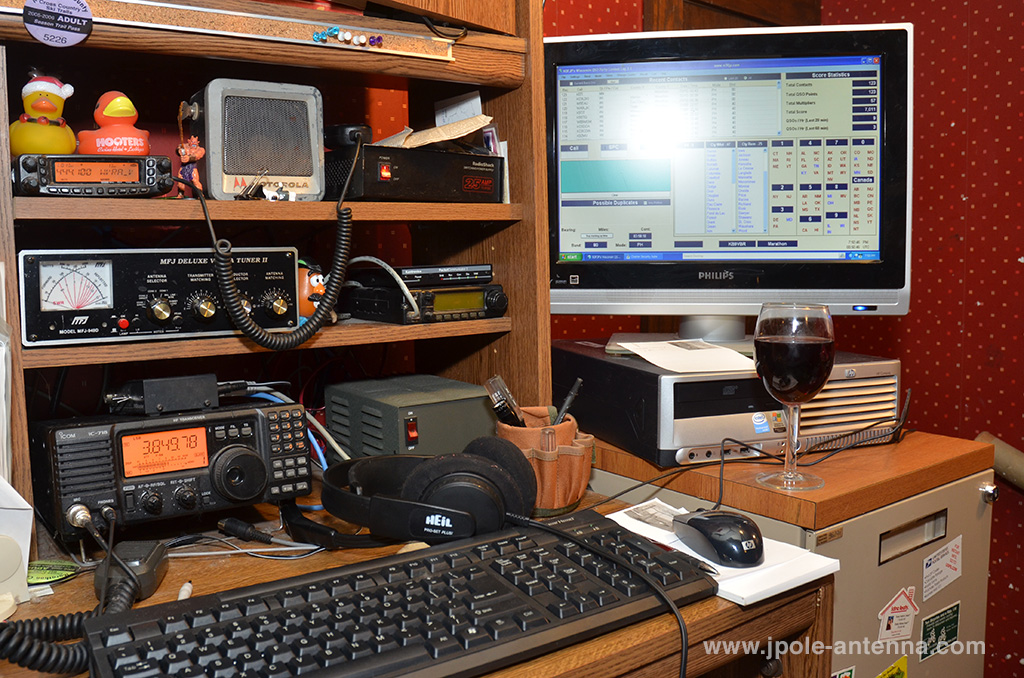 Back at it by 5:00, hunting and pouncing and picking up a few more calls. I find a few guys hanging down in the extra portion of the band and work them. I hear some people I haven’t before and work them. By this time the band is starting to open up and I’m catching Indiana, Ohio, Kentucky, Tennessee, and Maryland. My main antenna is only a G5RV, but it’s hot on 40m, so I get great results when the band goes long.

After dinner, I have about 30 minutes of the contest left, so I head down to 75 meters. Quiet. After cruising up and down the dial I find just three stations. Last year it was the 75 meter activity that put me over the top for a personal best score. So the poor conditions on 75m definitely contributed to my lower score. None the less, the clock hit 8:00pm and the event was over. 123 contacts, not too bad.

By the next day I had the logs submitted and all my QSOs were uploaded to the Logbook of the World. I do return QSL, so if we talked at the QSO party, feel free to send me a card. As always, my callsign and address is ‘good in the book.’

Were you active on the Wisconsin QSO party? Does your state have a similar event that you get on the air with? share your experiences, I’d love to hear them.