How close can I mount two VHF/UHF antennas

Antenna mounting can be a tough subject. We want multiple radios on the air monitoring different frequencies and bands, yet we are limited by the amount of space available to place antennas. A common question I receive is how close can I mount this antenna to my other VHF, UHF, or HF/CB antenna. With most questions of this nature, there is an easy answer and a not so easy answer.

The easy answer is that you should maintain a minimum mounting distance of at least 1/4 wavelength apart for the lowest frequency antenna within the same horizontal plane. For VHF antennas, that translates to roughly 19 inches. This is the rule we use when installing omni antennas on a the trunk of a vehicle. This guideline seems to work fine and with all the multiple radios I’ve used in my cars, and other than experiencing signal desense while a radio was transmitting; I’ve never had issue of one radio destroying the other.

What about base station operation? Will this rule work for antennas mounted on a mast or tower? It should, but I like to maintain the maximum distance possible. Just because two antennas can co-exist on the same plane, doesn’t mean that they should. Separating two antennas by three feet will cause a 30db drop in signal between the two antennas. So transmitting 50 watts on one transmitter could cause as much as 50 milliwatts of energy to travel down the feedline of the second antenna. For every foot of spacing, you’ll receive another 10db drop in power. The further apart you can separate the antennas, the lower the interaction between the two antennas will be.

Separating antennas horizontally can take up quite a bit of real estate.  Getting the antennas out of their transmit apertures will greatly limit the cross-talk or desense between the two transceivers. Omni-directional antennas like the 2 Meter J-Pole or 2 Meter Slim Jim antennas have a donut shaped radiation pattern. If you can move the second antenna outside of the donut, you can limit the amount of desense. The easiest way to do this is two mount the two antennas vertically, one higher than the other. For each foot of vertical separation you can realize 10 feet of horizontal separation. 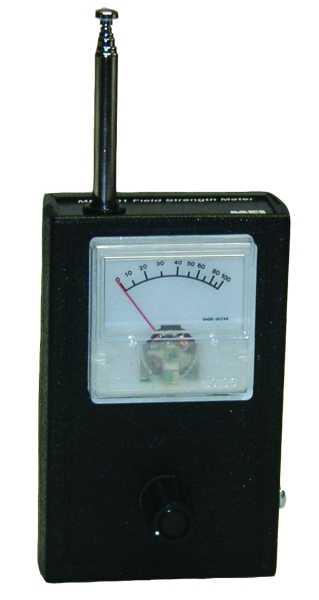 The formulas and distances of course are theoretical and other outside factors like buildings, structures, other antennas, towers could affect how your antennas receive and transmit. The best way to test for crosstalk and desense is to use a Field Strength Meter. this device will give you a real world number of the electromagnetic energy emanating from an antenna at a certain distance. Field strength meters can run a large price range, depending on their sensitivity and calibration. But an inexpensive meter like the MFJ-801 is sufficient for situations like this.