Gigaparts broke the news last week of a new mobile radio coming from Yaseu. The FTM-300DR is a dual band mobile transceiver with Yaesu’s C4FM system fusion digital mode built it. At this time it’s difficult to tell if the FTM-300 will be a replacement of the FT-400 or not‚ but it seems to be that the FTM-300 is being poised in the product lineup at Yaesu’s upper tier mobile transceiver‚ so we’ll talk about that in a bit. First I want to run down the specs of what the FTM-300 has.

First off the Yasesu FT-300 has 50 watts of RF power on both the 144-148 Mhz VHF band and 430-450 Mhz UHF bands. It also has wide band between 108 Mhz and 999 Mhz although the 800 Mhz cellular bands are blocked in the US version. As I mentioned it will transmit on the 2 meter VHF and 70 cm UHF bands. It has a double conversion superheterodyne receiver for increased sensitivity and selectivity for weaker signals and rejection of adjacent signals in high RF environments. Modulation includes F3E which is standard frequency modulation and 4FSK which is Yaesu’s C4FM digital modulation.

Speaking of C4FM the notable new feature of this radio is its simultaneous C4FM digital monitoring on both the A and B bands. Unlike the FTM-400 this new radio will have two digital vocoders so you can monitor two digital signals simultaneously. The radio has true dual band operation so the A and B bands function independently for any combination of VHF and UHF operation on them. 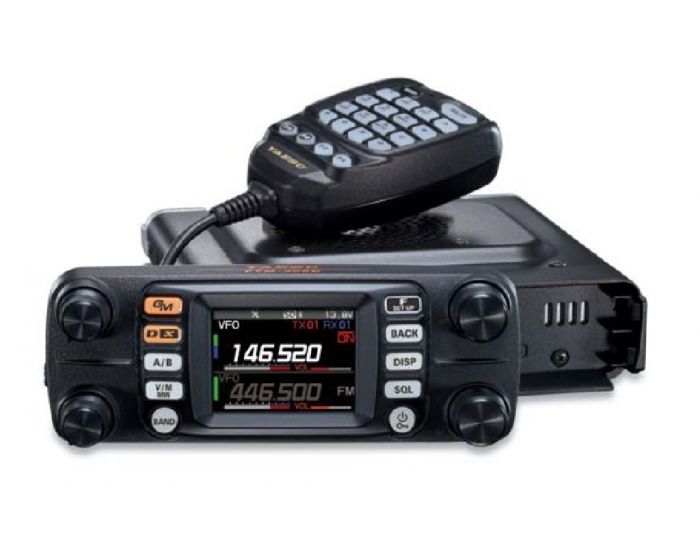 The front panel and display is the most notable new feature of the radio. It features a 2 inch Full color TFT display. But this radio does not have a capacitive touch screen. Instead you access the controls via the ten buttons and four knobs on the front panel. In the picture the radio also seems to have an upgraded microphone with bigger buttons than the standard microphone that comes with the FTM-400.

One novel feature of the radio is what Yaesu calls their Memory Channel Auto Grouping. Memory channels are automatically categorized in each band and memory channels can be easily and quickly recalled by 4 band groups: aviation‚ VHF‚ UHF‚ and general receive. There are 1104 memory channels. I presume this number also includes home and priority channels for each band- but there is no word if the radio supports memory banks.

The FTM-300DR has a built in GPS and provides some GPS navigation controls on the display. It also has a built in 1200/9600 baud data modem for APRS support.

A final notable feature is that Bluetooth is built in for hands free operation with the Yaesu SSMBT10 bluetooth headset or a commercially available product.

For system Fusion support the FTM-300DR supports the WIRES-X portable digital node function and fixed node function with the optional HRI-200. The radio has simultaneous C4FM monitoring so you can set your wires-x communication on one channel while monitoring another local channel at the same time.

I didn’t talk yet about the physical unit yet but the main unit is 5.47 by 1.66 by 5.2 inches and the controller is 5.47 x 2.09 x .7 inches. The main unit is cooled by a heavy duty heat sink and what Yaesu calls their Funnel Air Convection Conductor wind tunnel. The speaker deliver 3 watts of audio and has two speaker jacks: one for the A band and another for the B band.

One thing I’m going to point out that is not listed in the specs but if you look at the picture closely‚ it appears that the control head can be operated both detached from the main unit and attached to it. The control head has similar dimensions as the main unit although it is almost a half inch taller. Looking closer at the picture it appears there is a tab on the head and the main unit has space to accept the head. In fact to verify this‚ in the box Yaesu includes both a control cable for operation with the mounting front panel and a 10 foot control cable for remote operation. That alone may be a game changer for some users. 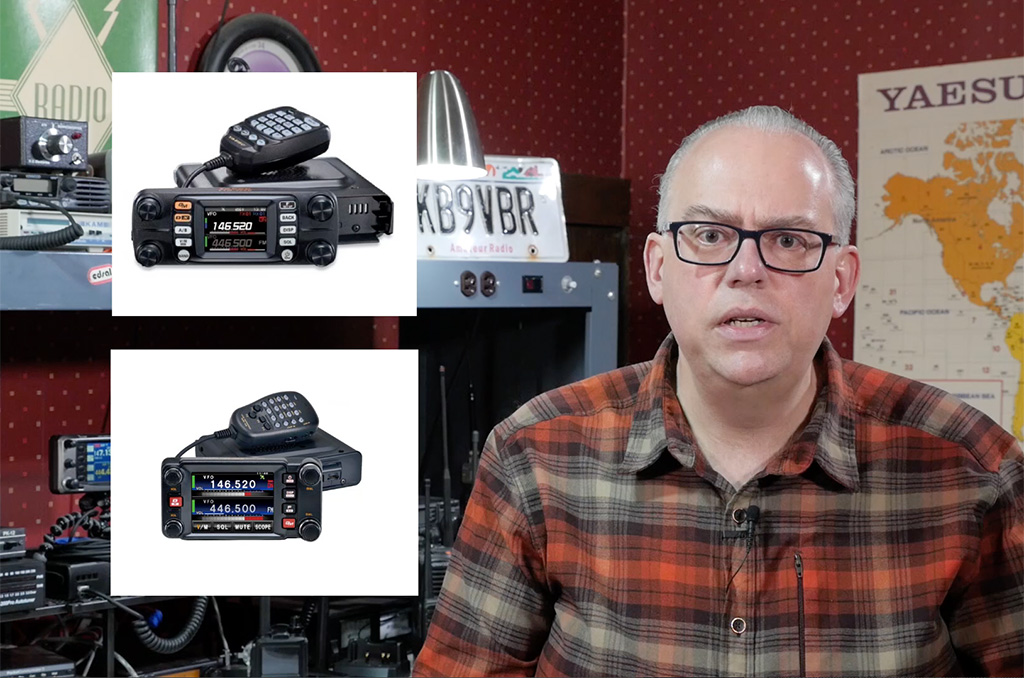 So what are my thoughts about this new radio. Like I mentioned earlier‚ it appears that Yaesu is positioning this as their upper tier dual band mobile unit. I don’t believe we will see this as a replacement of the FT-400 for a couple of reasons: First is the price. According to Gigaparts the FTM-300DR will retail for around $499. Although this is very close to the selling price of the FTM-400. The FTM-400 retails for $549 and after the discounts and coupons are applied has a street price of $470. So while price alone puts this radio at the top of the lineup‚ after the initial offering we’ll soon see coupons and discounts that put it more in line to where it should be. Next up is the product name: FTM-300- Yaesu intentionally numbered this unit to lie between the 400 and the less feature rich FTM-100.

But conversely the FTM-400‚ although upgraded over its product life‚ has been on the market since 2014. The FTM-300 has some unique features like dual C4FM support the FTM-400 doesn’t have. But still the FTM-400 features the larger touchscreen display that is obviously missing from the FTM-300.

So we have some conflicts between price‚ features‚ and age. On a product line standpoint this may make it difficult for Yaesu to continue to offer both units as they are too similar in features.

So maybe this will be a mid-tier radio that will compete with the FTM-100. But I don’t see that happening because the price gap is way too large. I guess we’ll see after the initial offering of this radio if Yaesu will offer coupons or incentives that drop it’s price below the FTM-400’s street price and place it more in line with the FTM-100.

That’s way too much speculation- I don’t have any inside knowledge of what Yaesu is thinking. I can only go with what information I’ve gleaned from reliable sources online and my past sales and marketing experience. Estimated shipping time is April of 2020 so we may see a big push to sell units when the Dayton Hamvention comes around. One final note- according to the documents submitted to the FCC the Yaesu FTM-300DR is manufactured in South Korea. If you want to read the test report submitted to the FCC‚ I’ve included a link in the video description below.

we continue to see Yaesu sell both the FT-2R and the FT-3R handhelds and the FT-3R is certainly an upgraded version of the FT-2R. I’m just a little wary as there doesn’t seem to be enough room in Yaesu’s product line to support both units.

Do you have any questions or comments on the upcoming Yasesu FTM-300DR? Please leave them in the comments below, i’ll follow up on the conversation and may even pull out a few for my next Your Questions Answered video.