Recently I was out camping at Brunet Island State Park. Autumn camping is the best as you get cooler temperatures‚ no bugs‚ and not many people. Brunet Island located near Chippewa Falls in Western Wisconsin is a very popular park in the summer months for its water access for fishing and canoeing so heading there off season is a great choice for someone wanting to avoid the crowds. My goal that weekend was two fold- to test out a couple of antennas and get on the air for the Wisconsin Parks on the Air special event. My parks on the air activation was a bit of a bust but I did get to spend quite a bit of quality time comparing two HF vertical antennas: the Chameleon MPAS 2 system and the Wolf River Silver Bullet 1000 coil. Both are popular choices for park activators so I’ll go through my personal experiences in using these antennas.

The reason I chose these two antennas‚ other than I own both of them‚ is that each one represents a different style of vertical antenna. The Silver Bullet is an adjustable coil and similar in operation to other screwdriver style antennas like the Buddistick and Super Antenna MP1. My experiences with the Silver Bullet will be similar to these other models- so if you are thinking about a SuperAntenna MP1 the information in this review will be useful to you.

The same is true for the Chameleon MPAS. This antenna uses a 5:1 transformer unit instead of a coil to provide a reasonable match across the HF bands of which you can use a tuner to finish the job. This is similar to Alpha Antennas FMJ system and many of the random wire end fed antennas on the market.

First off lets look at the specs of these two antennas. 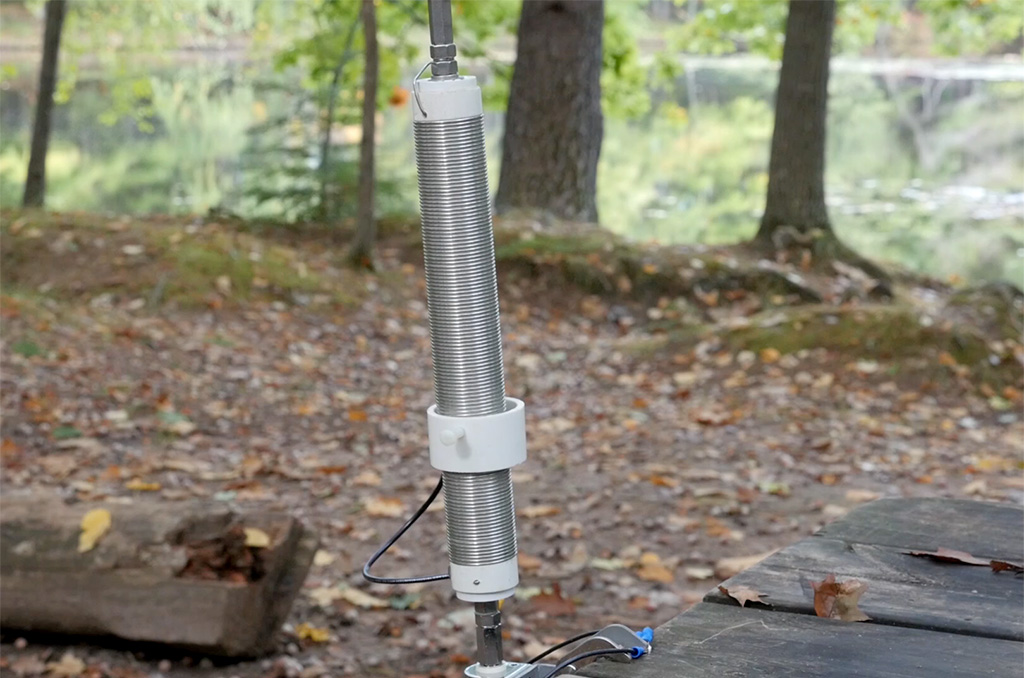 The Wolf River Coils Silver Bullet 1000 is a screwdriver type coil constructed out of stainless steel wire with a sliding coupler. When combined with a 102 inch whip it provides tuning between the 20 and 80 meter bands. If you shorten the whip‚ such as by using a extendable whip like the MFJ-1979 then you can also tune up to 10 meter band. So this is a resonant antenna. It will handle 200 watts sideband and 100 watts CW. It also requires ground radials and for best operation you will need about three radials of 32 feet in length‚ but more on the radials in a bit. 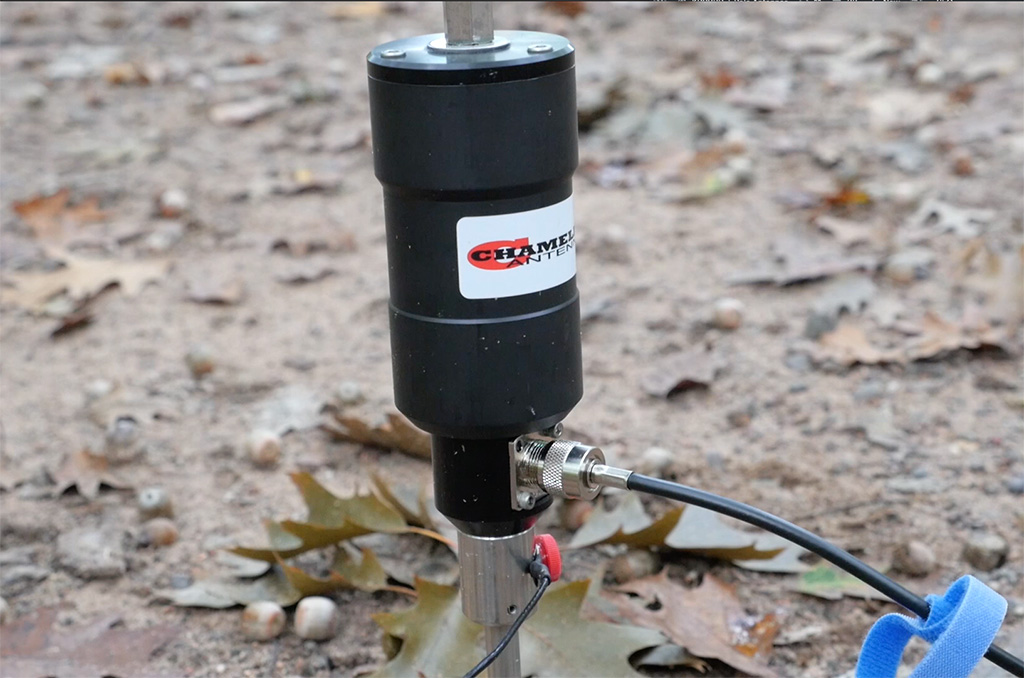 The Chameleon MPAS or Modular Portable Antenna System is part of a larger system that can be configured in a vertical‚ horizontal‚ or wire deployments. The core components for vertical use are the Hybrid Micro or Mini transformer. This is the larger Hybrid Mini which handles more power than the micro‚ and the 113 inch Mil-whip and 105 inch Mil-Extension. The system also uses a 25 foot counterpoise wire and comes with a spike for ground mounting. This is a non resonant antenna so you will need either a wide ranging antenna tuner or rely on your rig’s built in tuner.

Even before we get started the Silver Bullet wins on price. A complete setup with the coil‚ whip‚ radials‚ coax and base will run about $200- which is a really good deal for what you get. The Chameleon MPAS 2 system‚ while quite full featured‚ is over $500. But that also includes the components necessary for a variety of wire‚ vertical‚ and horizontal deployments. You could purchase pieces ala carte to put together just a vertical antennas but you won’t save much. So you do get quite a lot capability for your money. 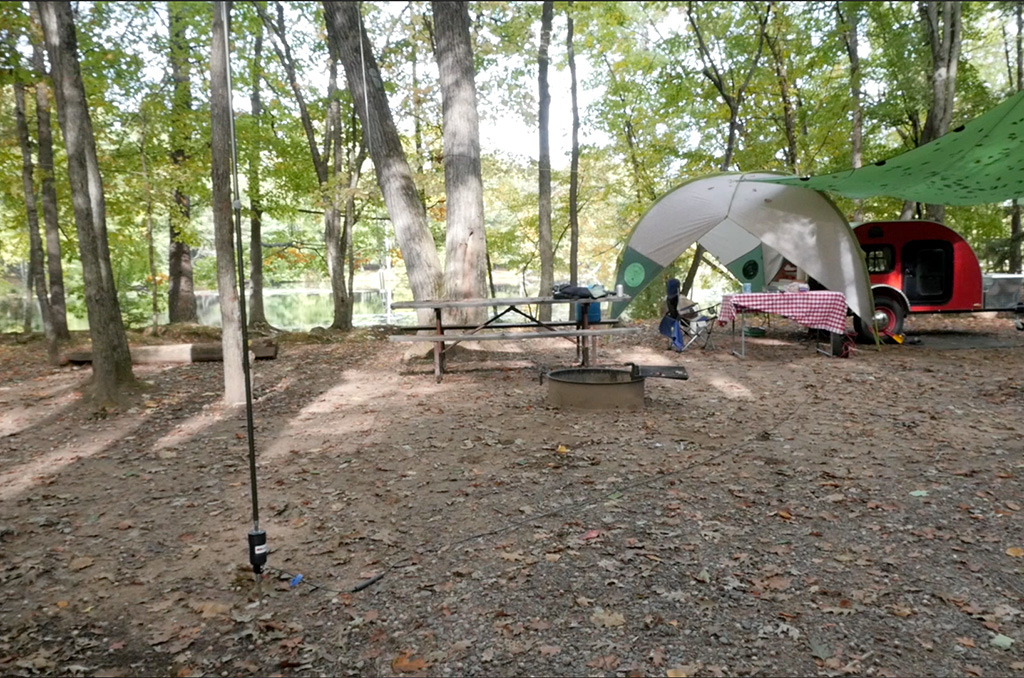 First off lets talk deployment. Both systems set up quickly- there really isn’t much of a difference between the two. The MPAS includes a ground spike for ground mounting the antenna and the Silver Bullet screws into a jaw mount that I clamped onto the picnic table. I had either antenna up and on the air in less than 10 minutes each. One thing I like about the MPAS is that you just unfold the bungee cord integrated whip and screw the pieces together. For the Silver Bullet‚ if you are using the extendable whip you will need to decide how many sections you wish to pull out- This can cause a bit of variability in the tuning so if you are like me and want to make tuning and adjustment quicker- you can make a mark on the whip at the 102 inch length so you can quickly return to the approximate spots on the coil for a particular frequency.

And thats the big advantage of the MPAS. Across the HF band the antenna has an SWR of around 2.5:1 or less. If you are using an auto or built-in tuner you can just hit the button and transmit. Even with a manual tuner like what I use in the field- the tuning process is pretty easy.

That’s not quite the case with the Silver Bullet. If you change bands you will need to adjust the coil. You can speed the process by running a piece of tape along the side and making some marks‚ but you are still manually fiddling with the antenna. You may also need to adjust the radials and the whip. So the band change process isn’t automatic. 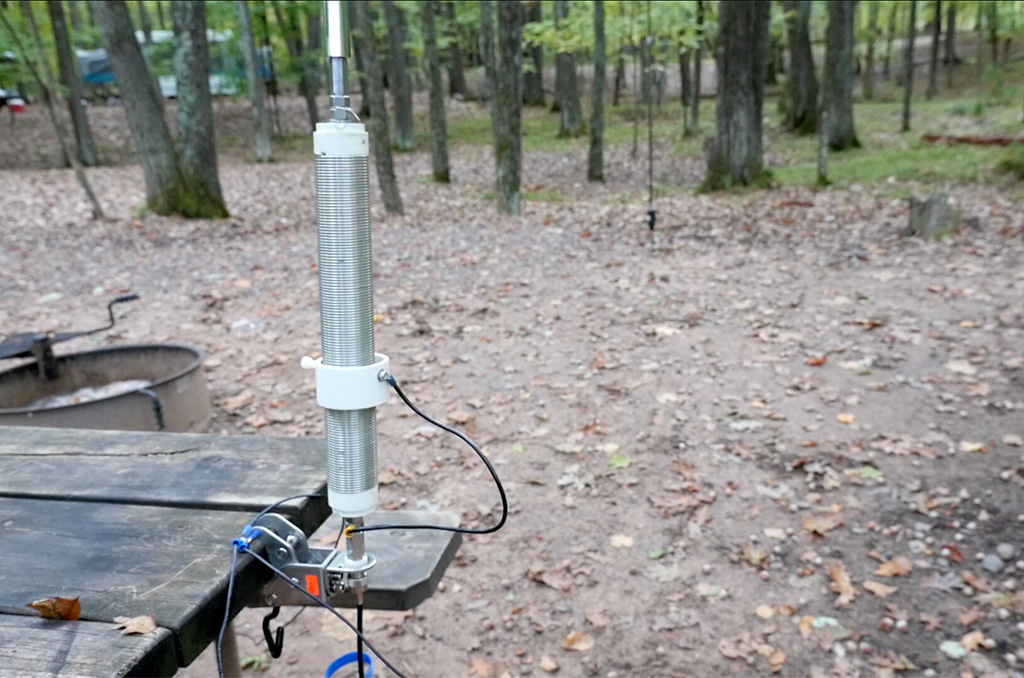 I also want to talk a bit about the radial system. The Silver Bullet ideally works best with three ground radials of about 32 feet in length. A single radial won’t cut it but you can get by with two radials. I also find that on the upper bands that you need to shorten the radials. For example on the 20 meter band using 32 foot radials‚ I can’t get the SWR below 1.7:1- shortening the radials by winding them into a tight coil gets me a better match.

Of course with the MPAS system you are trading performance for convenience. One big complaint I received on my previous reviews of this antenna is that since it is non resonant‚ much of your RF energy is lost in the transformer. Plus needing a tuner to provide the proper match to the radio adds more inefficiency to the system. But the big question is how much inefficiency?

The purpose of my recent park activation was to give both antennas a workout in a real world environment. Most of the day I ran both antennas on the 20 meter band. My park activation was a bit of a bust due to persistent sprinkles throughout the day but I did contact a fair number of stations participating in the Washington Salmon Run. Both antennas worked quite well on the 20 meter band and I really had no problem working most every station that I heard. Anecdotally I would say that I had an easier time with the Silver bullet as it seemed to take more repeats with the MPAS and stations had no trouble hearing me on the Silver bullet.

Sunday morning I put both antennas on the 80 meter band to work the statewide ARES RACES HF net. Net control which was about 150 miles away copied me on the Silver Bullet vertical. I was a little surprised as verticals don’t work so well for regional or NVIS contacts. Tuning around I did an A B comparison on the 80 meter band and noted that the Silver Bullet was about 2 S units higher in signal strength as compared to the MPAS. Since its a general rule that if you can hear them you can work them- this difference is signal strength may be enough to bust the pile up.

So finishing up- I believe both antenna systems have their merits. The Chameleon MPAS is quite rugged‚ compact‚ and very versatile. If there was only one field antenna system I could use- I would grab it just because of its versatility. As I used it this past summer I found the wire deployments just as useful as the vertical. Plus not having to fiddle with the various adjustments was quite nice. 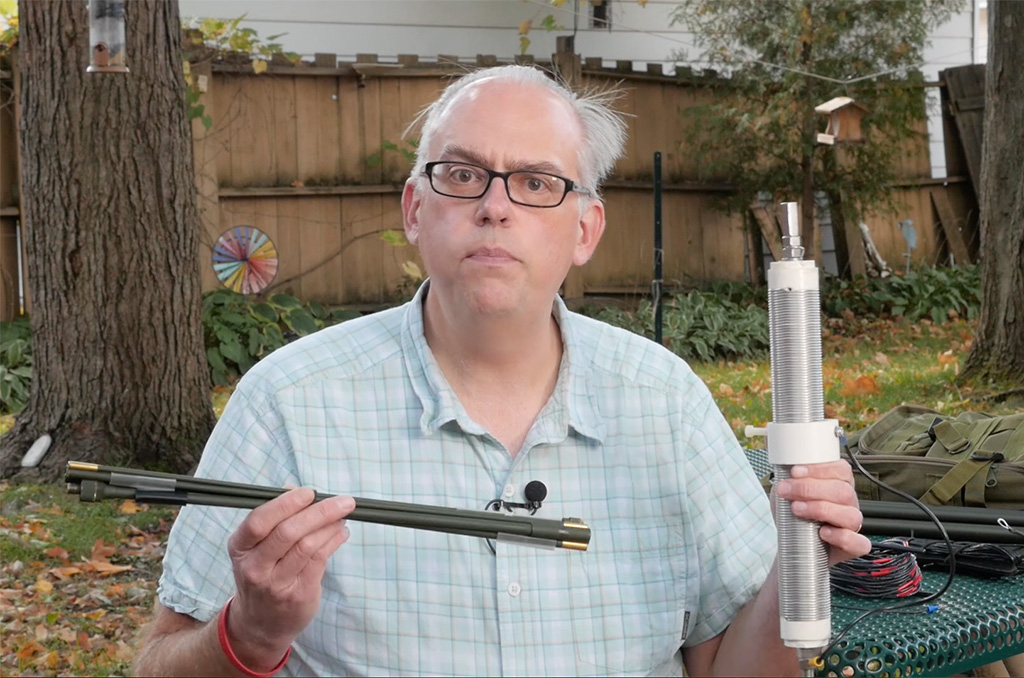 But I’m also not ready to give up my Silver Bullet 1000. The antenna is quite efficient and the coil is rugged. If there was a weakness with the antenna I’d say its the extendable whip. I’ve busted a few whips over the years and if the antenna tips‚ you’ll run the risk of breaking the whip. Of course you can use a 102 inch stainless whip but that lessens the portability. In an ideal world I’d take the Chameleon’s MIL-whip and combine it with the Silver Bullet coil for a super rugged‚ portable‚ and efficient  vertical antenna system.

I hope this video cleared up some questions you may have had about the two antenna systems and maybe shed some like on the key differences between using a transformer and a loading coil for a vertical antenna. So do you have any experiences with the Chameleon Hybrid Mini and Wolf River Silver Bullet coils? Leave them as a comment below, I’ll filter through them and keep the conversation going. Maybe one will even show up on the next your questions answered video.