This month I’m gonna tackle a bunch of questions on my recent portable HF kit and portable power videos, there were so many great comments and questions that deserved a followup, so thank you to everyone that engaged in the community discussion. Plus I’ll talk a little bit about my thoughts on the recent proposal to reassign a portion of the two meter band to aeronautical aviation use. So please stick around to the end for that. But first, your questions:

My video on the HF portable kit sure generated comments. Most of them were targeted towards the noisy chevy truck and the mosquitos flying around. I’m a little bit adverse to using repellent around my radio gear as if you aren’t careful, the compounds in the bug spray and melt or discolor some of the plastics on the equipment. But I will apply repellant carefully when need be and use other things, like citronella candles or these little incense like things.

Yes, the power cables are a bit of a jumble in my bag, so I got some of these velcro cord wraps to tidy things up a bit. It should make a big difference when pulling the cables out.

Great video, just purchased the 891, can you help me please, i cant seem / to get the swr meter on the screen in replace of the po, how do you do that

Normally on the FT-891 I run the ALC meter so I can monitor my voice output when transmitting, but in the field I will switch over to SWR to keep on eye on that. To do that, press the F button on radio until you see the MTR option on the screen. Turn the selector dial to highlight it and press it to change that option. Now you can select between Power, ALC, and SWR meters on the front panel.

Could you talk a little more about the connectors you added to the antenna mount that clamps on tables. I assume it just comes with the hole and you have to add connectors. What type do you use and did you have to modify the clamp to accept them. Maybe you have a more detailed review in another video??? I love watching your videos. I always learn something new. Thanks very much.

The device you are asking about is called an antenna quick release mirror mount. This is a really handy little device, you can purchase them through amazon, I picked mine up at a hamfest, so they are a pretty common accessory. The jaw can open up and clamp on anything tubular, so you could attach the antenna to a pole or something. there is also a screw on the side so you can change the orientation of the antenna connection and mount the clamp horizontally. This clamp is big enough that you could bite into a picnic table with it. I’ll put a link for it again in the bottom of the video, 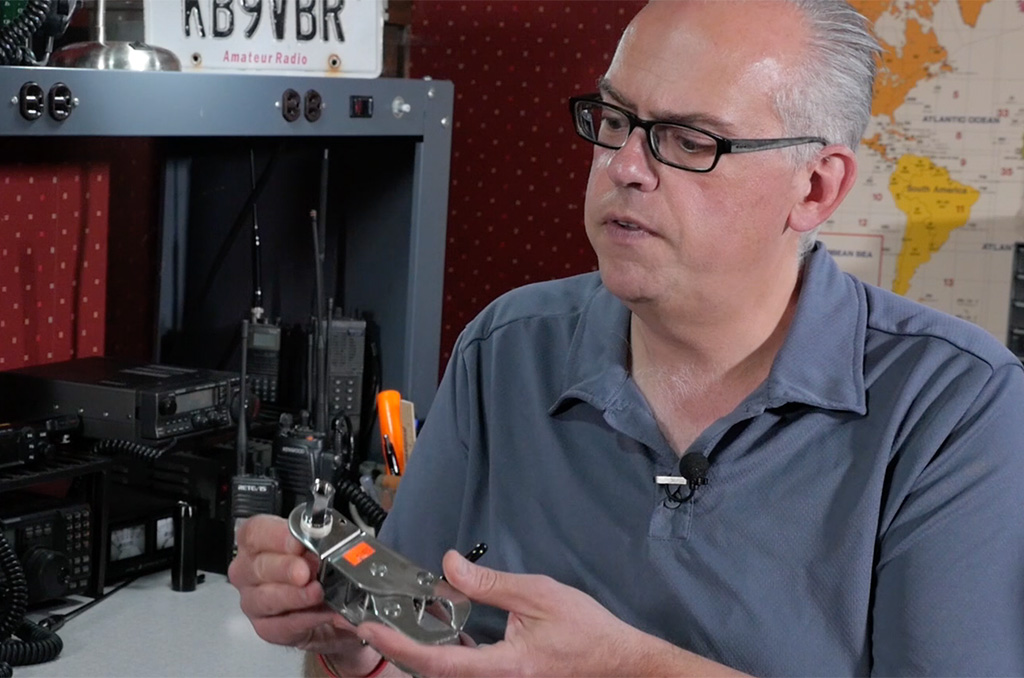 I also received a couple comments on the size of the pack. Ryan says:

Thanks for the video.  I would compare the kit you showed to “car camping” rather than backpacking. Hopefully that analogy makes sense. I’m more of a “backpacking” portable guy. Still, I can appreciate the thought and effort you put into your definition of portable. Its all about defining the mission and then building a kit and capabilities to match that mission. Its OK if we are planning for different missions. I guess a variety of things can fall under the umbrella of portable operation. Keep up the interesting

You are correct. This kit is built around the premise of car camping or using the trailer as a home base. If I was planning to backpack or hike in my equipment an appreciable distance, i would certainly choose a different setup with lighter gear. Probably the first two things I would ditch are the meter and the tuner and go with a lighter wire antenna, or use the smaller Wolf River 10-40 meter coil. So there is a lot that can be done to shed weight. Just think of this video as a starting point and then shrink things down from there.

And we’ll finish up with a comment from Damian:

Pretty much like everyone else in the comments… I’d be interested to see what power source you are using and how long batteries last ?

And this is a good segue into my next video on portable power. I split the two videos up, one on the kit and another on power as I like to produce single topic videos. If you try to cover too much ground in one video, the discussion gets really cumbersome and you end up losing people. So the first video was on the kit itself and the 2nd on portable power for the kit. But starting things off, much like the POS Chevy was the talk of the first video, the photobombing squirrels stole the show in this one.

First off, lets talk about depth of discharge of your battery. logan writes:

In my video, I gave a description of capacity by calculating how many hours I could run my station on a lead acid AGM battery. But one important consideration that I did not factor into my example is the depth of discharge or capacity of the battery. AGM batteries should never be discharged to more than 25% percent capacity and optimally should be used above 40% capacity. If you deep discharge an AGM battery you do run the risk of permanent damage. So in my example I said i could get up to 9 hours of life out of a 35 amp hour battery, but in reality, that number would be more like 5. My recommendation is to monitor the voltage of your battery and when the float voltage drops to just under 12.0 volts, it’s time to stop using it and recharge the battery.

Lithium ion batteries have a higher initial capacity and can be discharged to a greater degree than lead acid batteries. That’s what makes them appealing for field use and many solar systems are going the lithium route over lead acid. Lithium Ion batteries have a higher initial cost, but over the long run you can save money as they offer more charge discharge cycles and greater usable capacity. So it isn’t all about weight anymore when choosing to go the lithium route. if you are planning a battery system for the long haul, I’d consider making the investment into lithium. As for me, the AGM battery in my trailer is approaching four years old, its been well maintained and still delivers good output. I’ll continue to use it for this season and consider a lithium ion replacement for next year.

At 3.75amp/hours ( 40 odd watts) could a 100w solar panel keep the battery topped up in day light? Or is the real world output not that good?

My rule of thumb is divide the rated output by 3 to get a realistic output, and that’s in summer with good sun.  Conditions are never ideal.  Sometimes in good sun I get about 1/2 the rated power.  As for the load, remember that you aren’t running at 100% duty cycle ever.  Not even close.  At some point you’re unkeying the mic.  So you might not need as big of a panel as you think to keep the battery topped off.  Your panels should be sized to the average load not the peak load, and the battery should be sized for the peak load and/or the amount of time you want to be able to operate without solar.

In reality, with my panel I’ll get two to three amps of power output. But we are camping in shady spots and it can sometimes be difficult to place the panel in full sun. I’m also at a higher latitude, at 45 degrees north, and I would imagine if I was further south, the panels would generate more power. I guess you need to weight personal comfort with solar output.

And finally, the Midnite Rider asks what’s my take on the reallocation proposal at the recent CEPT meeting.

I’m sure you’ve seen the doom and gloom blog posts and breathless commentary, and circulating change.org petitions about what’s happening over in Europe with the 2 meter band. The ARRL writes: No strong opposition to 144-146 Mhz reallocation proposal at CEPT meeting. To summarize, CEPT is the European Conference of Postal and Telecommunications Administrations which is a quasi governmental group of the various European communications regulatory bodies. At their recent meeting France submitted a proposal to reallocate the 144-146 Mhz band and a portion of the 23 cm band on a primary basis to the Aeronautical Mobile Service. Ok, there is a lot to unpack there. 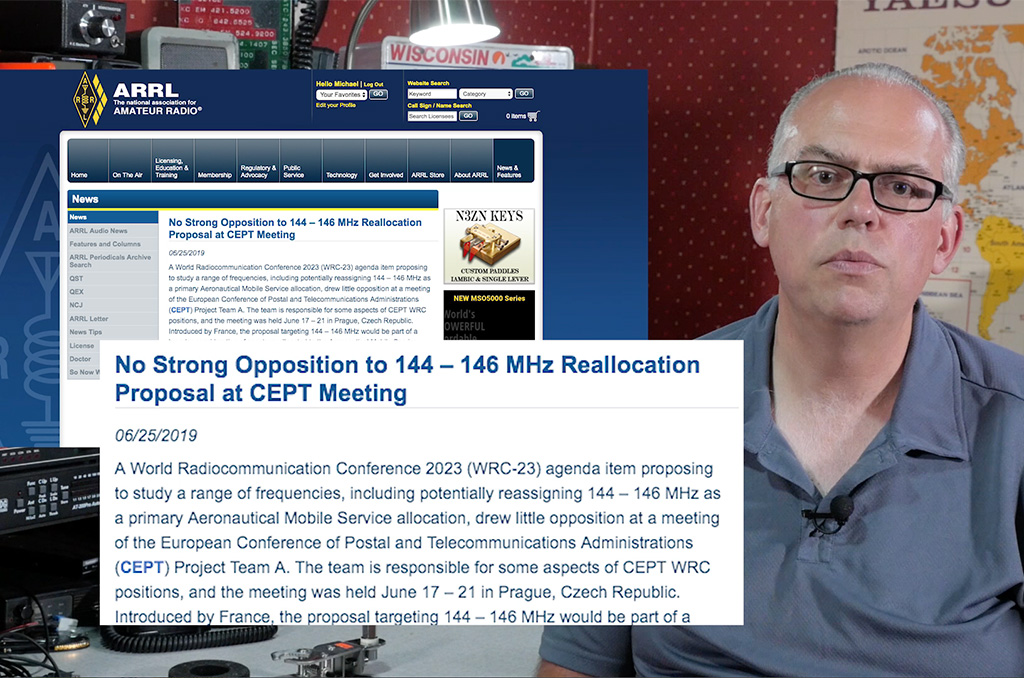 On it’s face it sounds like CEPT is taking away our 2 meter band. But lets look at the specifics of the issue. First off, all that happened was that the proposal was added as an agenda item to the 2023 World Radiocommunication conference- which is 4 years away. and all that was recommend at the CEPT meeting was to study the proposal in advance of the conference. So nothing will change in the next four years.

Now this is all happening over in Europe which is ITU region 1. North America is located in Region 2, so anything that CEPT pushes isn’t going to affect us directly. But there could be a ripple effect as amateur satellite link frequencies are found below 146 Mhz. Plus sideband and DX frequencies are found at the bottom portion of the 2 meter band.

So as amateurs in the US, what can we do. According to the ARRL, the 2 meter band is the only globally harmonized VHF band and supports a widely used segment of amateur radio spectrum for repeaters, terrestrial DX, satellite, and the International Space Station. If CEPT is studying this issue, amateurs, especially those in european countries, need to make a case that this frequency is a valuable and highly utilized asset of the amateur community.

So that brings me to the change.org petitions. Will signing a petition solve the problem- most likely not. These petitions may make you feel good, but have very little weight. If you are really concerned about losing spectrum- and spectrum loss can happen anywhere at any time. I recommend at the join the ARRL and support their Spectrum Defense Fund. 15 or so years ago we could have lost vast swatches of HF spectrum to noise created by broadband over power line systems. But the league fought hard to show the power companies that such a system was not in the best interests of amateurs and testing and deployment was eventually dropped.

So final word- don’t fall into the doom and gloom prophecy, but instead be forward thinking, get on the air, and show the valuable and utility of our 2 meter VHF band.

That’s it for this month. Coming up for future videos, I have a couple of product reviews, I’ll also put my HF portable field kit to work with some operating, and of course the second video in my Retevis RT97 portable repeater review. If you have any questions, please leave them below. I usually go through and answer them best I can. I may even select a couple for my next Your Questions Answered video.