Recently I was at the Madison Amateur Radio Association’s annual swapfest in Stoughton Wisconsin. My wife, Christine, likes to come along to many of these shows as she often stumbles upon some interesting non amateur radio related item. This year’s swapfest was no exception as she found a vintage Guild Model 484 Spice Chest AM radio. She has a sweet spot for vintage radios, there are several spread around the house so the Spice Chest fits in well in our small collection of table radios and the floor model that’s sitting in the dining room.

The Guild Radio and TV company of Inglewood, California produced a line of novelty radios that were somewhat popular in the 1950’s and early 60’s. Along with the Spice Chest they produced the Country Belle telephone radio, a treasure chest radio, and Town Crier lantern radio, among others. The common thread between all these radios were their kitschy Early American styling, which was a popular mid century design trend, and their five tube construction, also known as the All American Five.

The All American Five is a common name for a mass produced superheterodyne AM radio receiver that used five vacuum tubes in their design. The sole purpose of this design was to make the radio as cheap as possible. So the design was optimized to provide good performance for the price. This was done by eliminating the power transformer and connecting the heaters of the tubes in series. All the tubes drew the same current, but a different voltages. But when combined in series, they added up to 121 volts, or slightly more than the AC electrical supply voltage of 110-117 volts.

The downside of this design is that the metal chassis is connected to one side of the power line, so there is a dangerous shock hazard and these radios required a well insulated cabinet. To make matters worse, the AC plug is not polarized, so depending on how the radio is plugged in, the chassis could still be hot when the power is turned off. Underwriters Laboratories, seeing a problem with this design mandated the adoption of a floating chassis, which isolates the mains supply to limit electric shocks to a relatively safe current level. So the chassis is maintained at RF ground by a bypass capacitor with a resistor connected across it. But be careful as these paper capacitors often become leaky and could allow sufficient current flow to give you a shock.

Safety considerations aside, millions of these type of radios were produced by hundreds of manufacturers between 1930 and 1960 and because they required 120 volts AC, this style of radio was extremely popular in North America, hence their All American designation. Which brings us back to the Guild Model 484 Spice Chest. 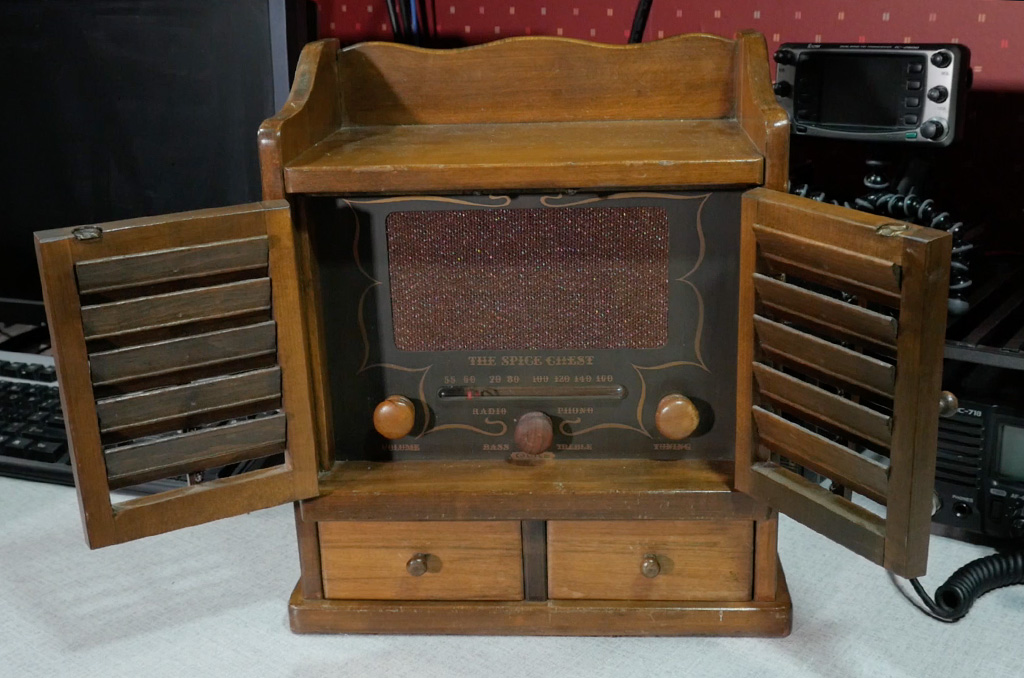 The Spice Chest is constructed out of solid wood with an early american finish. This is a little unusual as most radios of this era tended to be of a wood veneer or plastic construction. The Spice chest was produced between 1953 and 1959 and seems to be more of a decorator piece as it would fit very nicely into the kitchens sporting the popular early american or country western decorator theme. Early models had solid doors and later years featured the doors with little louvers. Knobs are also wood and there are three of them, for power, tuning, and bass treble control. During its production life the Spice Chest’s speaker grill also featured several different early american or country scenes. Ours, which dates to 1959 has a plain speaker grill cloth.  So there seems to be a bit of variation during the radio’s production run.

Turning the unit around, you can see the non polarized outlet plug, although ours has the UL sticker, so it should have the floating chassis shock protection. The label has a simple diagram with the tube layout. Since the tubes are wired in series, if one goes out, the whole radio will stop working.

Removing the cover, the simplicity of the All American Five becomes evident. On top of the chassis are five miniaturized tubes, an air capacitor for the tuning, and a small transformer for the speaker. Underneath you will find the rest of the parts in the form of various capacitors and resistors neatly wired together. The whole design is pretty elegant as this complete chassis can be put in about any case or enclosure. Hence the wide variety of novelty radio styles that Guild created. 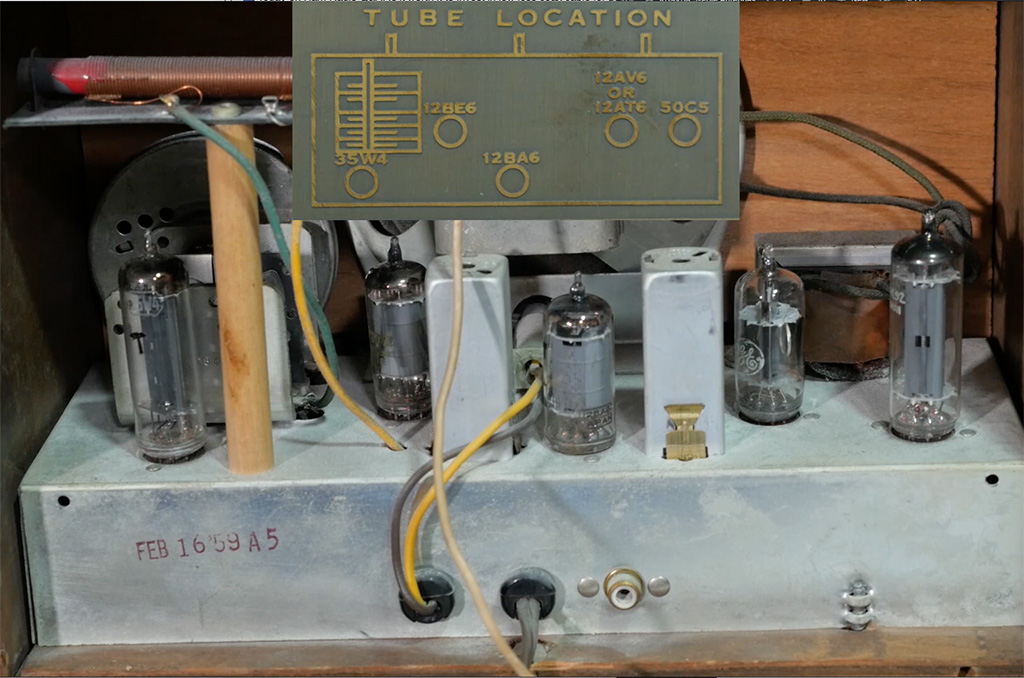 Breaking it down, the tubes in the All American Five have the following functions

Put them all together you have an ingenious design that can be inexpensively duplicated. And it was, millions of radios based on this design, or mass market AM receivers. But this is late state technology and by the end of the 50s transistorized models were  nipping on the heels of these tube radio.

What are these radios worth? Despite what the ebay listings say, the Guild Spice Chest is neither rare nor particularly valuable. There were quite a few produced during its run and the novelty aspect seems to slightly depress it’s price. Look for a models under $30 if they are unrestored and $50-75 for clean, working, or restored units. My recommendation is to buy it as a curiosity, especially if you are interested in mid-century Americana or vintage kitsch.

I hope you enjoyed this look at the Vintage Guild Spice Chest AM Radio as how it relates to the All American Five radio design. If you collect vintage radios like this, I’d love to hear your comments, please leave them in the comment area below.