Today we’re out here in Northern Wisconsin for Winter Field Day and it’s a balmy two degrees right now. Next to me is Joe KD9CJX you may have remembered him as the Baofeng guy in one of my previous videos. But we’re not gonna talk about that. Today we’re gonna talk about the Chameleon EMCOMM III Portable end fed Antenna. We’ll tell you a little about the deployment it’s operation and our impressions of the Antenna. Please watch the video for the full details:

Okay, so the Antenna we’re using today is a Chameleon EMCOMM III Portable Antenna. Its an end fed, it’s got about 75 feet of wire on it. It’s a finer, I believe it’s like a 16 gauge, Teflon coated. So it’s pretty pliable even being out here in the cold which is good that’s something you wanna consider. It’s got about a 25 foot radial on it as well. So the way we’re gonna set this up is an inverted inverted L or, upside down L or whatever you wanna call it. The radial will be hanging down and the radiating elements will be ran out so almost like we tipped an L on it’s side. So I’m gonna get it rolled out here and we’ll Put it up in tree.

Well in conclusion, the Chameleon EMCOMM III Portable Antenna the amp that we’ve been talking about here is a pretty good performer, we did notice that contact wise it is fairly directional off the sides. The formation that, or the setup that we have here it’s running east to west so most of our contacts were the south. We being in Wisconsin so we were seeing contacts in south Texas and Louisiana in that direction. Not very good off the ends, our east and west coast coverage was pretty nil. We didn’t have any success there but that’s to be expected. So remember that when you’re installing this you may want to position the radial, or not the radial he element in the correct direction so you can reach the station that you’re trying to get. 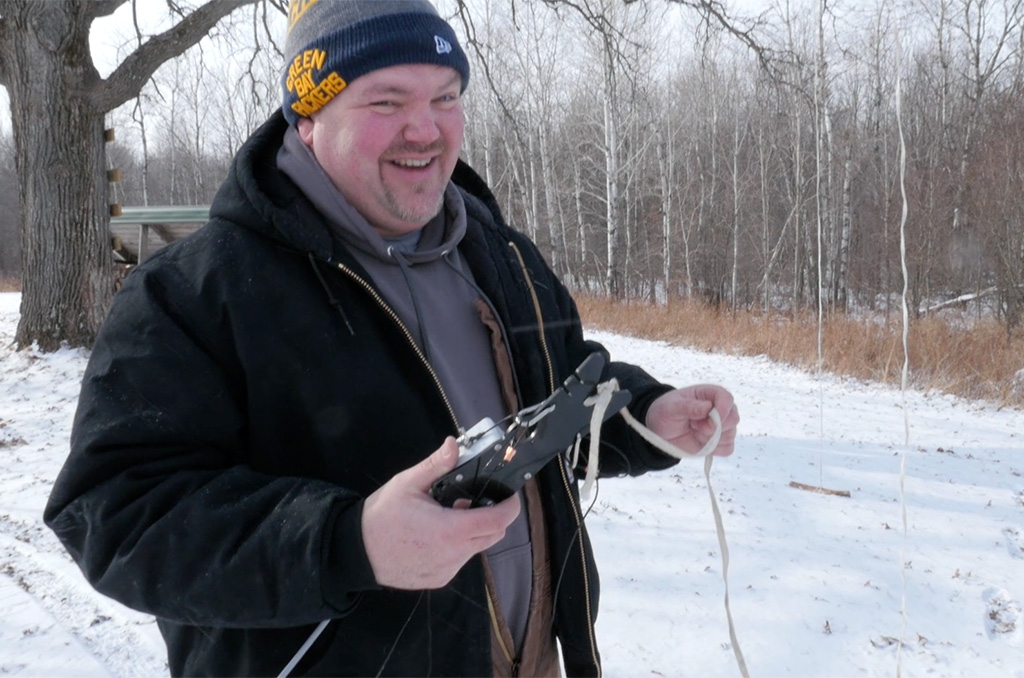 Down fall of the Antenna I think first and foremost is the setup itself, 75 feet of wire plus another 25 for the radial gets a little challenging. Probably not terrible when it’s 75 and sunny out but when it’s negative 10 and brutally cold that extra five ten minutes without gloves trying to get that untangled was a little bit of a problem. And that’s not necessarily an engineering or nock on Chameleon it’s just the way it is. But good that it is the Teflon coated wire. That seems not to catch in the trees we found out. In previous I’ve used just regular wire THHN and that definitely it’s not ideal for a situation that’s where it’s caught in trees it tends to bind up more. So there’s that.

Overall I’m, we’re pretty impressed with it. would say I’d give it an eight or a nine out of 10. It’s compact, it’s light, it’s versatile, you can set it up as a sloper, you can set it up as an inverted V, a number of different configurations for that. So we’ll give it a thumbs up and we’ll use it again probably for field day coming up in June.