You’ve seen these printed on QSO cards, but what do they mean. I’m talking about grid squares, a unique method of geolocation that is popular with HF digital and VHF & UHF operators. When I say unique, I mean the grid square system has the ability to convey your location down to the precision of about 3.5 miles using only 6 characters. While that doesn’t sound very precise, it’s extremely useful and good enough for radio communications.

But where did the Maidenhead Grid Square system come from and how does it work? VHF operators have longed for a method of easily describing their location. Using geographic descriptors like region, state, or city aren’t precise enough and take up valuable time in a contest exchange. Back in 1980 the VHF working group solicited proposals for an easily workable geolocation system to replace an older grid location system that was popular in Europe but had limitations for global locations. What came out of this meeting in Maidenhead, England was a worldwide system that could represent location with limited precision using a small number of characters.

So how does it work? The grid square system uses two character sets to break up the globe into a system of progressively smaller squares. At its coarsest level, the first two characters, called the Grid, break things up into fields that are each 20 degrees of longitude and 10 degrees of latitude. Lets pull up a map that makes things easier to visualize. The SOTA Mapping Project has excellent grid square map overlay you can use to view how the grid breaks up the world. Longitude starts at 180 degrees west and each 20 degree chunk is given a letter from A to R. The latitude starts at the south pole and goes north in 10 degree segments using letters B through R. The continental US is contained in about 9 grids, so if I wanted to report my location in Wisconsin, I’d use Grid letter EN. The nine by 18 grid has 324 individual squares covering the earth.

That’s a pretty big chunk of area, so in order to break things down, this grid is broken into another set of squares. Each square is two degrees longitude and one degree latitude and number from 0 to 9. Longitude is the first number and latitude is the second. So with four characters we now have a precision of about 70 miles. Since I live in north central Wisconsin, my grid and square locator would be EN54.

But is that enough precision? For some applications it may be. But VHF/UHF contests will score contacts based on their distance, and two contacts could easily fall within the same grid and square. So the squares are further broken down into smaller 20 by 20 fields. These fields are represented with two sets of lower case letters from a to x for the longitude and latitude. That gives us a precision of about 3.5 miles, so my complete locator, which covers the south half of Wausau, Wisconsin is EN54ex.

How do I find my grid locator? QRZ.com will calculate your grid based on your street address. The Summits on the Air Mapping page will let you dynamically zoom into your location and show you your grid. Or most GPS units will tell you grid. If you are using a GPS to find a grid locator, make sure you are using the WGS84 map datum.

So when will you use the grid square system? VHF and UHF contesting rely on exchanging grids as part of their contest exchange. If you are planning to apply for some awards, like the VHF UHF Century club, you’ll need to track grid locators. Digital modes, especially the automated ones like JT65 and WSPR use grid locators as part of their exchange. Any time you need to convey a general location easily over the air, the grid square system will come in handy.

That in a nutshell is the Maidenhead grid locator system. If you have questions, please leave a comment below. Do you know your grid? Share that in the comments too. 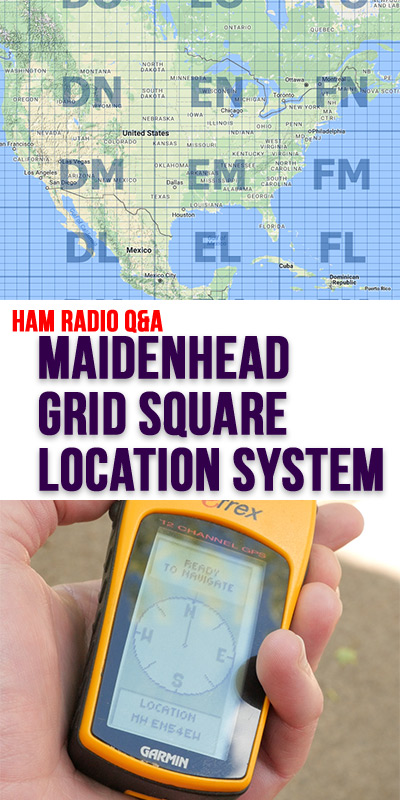