If you’ve been exposed to amateur radio for any length of time, you’ll notice that the hobby has a language all of its own. Special words and phrases, Q codes and numbers- what do all these mean? The richness and diversity of the language of amateur radio has grown over it’s century of history. Some of the words may seem antiquated and others have been born of necessity. But almost every word has a purpose. In this article I’ll highlight some of the more common code words and abbreviations commonly heard over the air or in person when talking to another ham. While this may not be a comprehensive list, it will cover most anything that you’ll hear over the air.

Q codes and number abbreviations got their start from the early days of sending morse code over the air. Instead of sending long phrases and sentences, code operators quickly created a list of common phrases. While the Q Codes are still commonly used over the air in CW conversations, many of the code words have wound their way into the ham operator’s vocabulary. Here are some of the common Q codes you’ll hear over the air

QRT : Going off the air. A DX station may say he’s QRT after working a big ‘pile up’

QSL : A record of an amateur radio contact, usually verified by exchanging QSL Cards. An operator will ask the other station if they successfully copied the contact information by saying ‘QSL?’

QSO : An amateur radio conversation.  If I have a two way contact with another amateur radio operator, it’s referred to as a QSO.

QRZ : Who is calling? Commonly used in contest exchanges, at the of a QSO and after verification of QSL information, the station will say QRZ to signify that he’s ready for another contact.

73 : Best wishes. Many hams like to pluralize it by adding an ’s like 73’s. But since 73 is already plural, that would translate to bestest wishes.

88 : Love and Kisses. Something you’d say to a YL, but could get you in trouble with you XYL.

After a long session of contesting, I’ll go QRT and pop open an 807

A complete list of Q Codes can be found here.

Along with the frequent use of Q codes and numbers and you’ll hear over the air, there are several other peculiar words that pepper the casual conversation of ham radio operators. Here are some of the more frequently used ones.

Balun : Balanced to Unbalanced. A device for transforming the impedance of an antenna system so that 50 ohm coax cable can be connected to a higher impedance antenna.

Barefoot: full transmitter power without the use of an amplifier. Usually 100 watts.

Busted Call: Illegitimate callsign that doesn’t show up in any callsign directory or database.

Desense : The effect of a receiver front end being overloaded by a nearby high power station. ‘I couldn’t hear the repeater output while Fred transmitted because he was in the car in front of me.’

DX: A station from a foreign country. ‘Rare DX’ would be a country that is seldom on the air. In a jesting fashion, you may also call another ham you seldom hear on the air ‘rare DX’ also.

Full Quieting : An FM signal received with no noise, fry, or interference.

Kerchunk: Keying and releasing the microphone PTT without speaking on a repeater. The practice often causes the repeater to beep and identify. ‘Time to assemble the fox hunt team, someone keeps on kerchunking the repeater again.’

NVIS : Near Vertical Incidence Skywave. NVIS propagation relies on low mounted antennas so that the radiation is mostly vertical. This is handy for local and regional communication on the HF bands.

Odd Split : A station listening on one frequency and transmitting on another. Often used by DX stations to manage a pile-up.

Picket Fencing : In FM communications, a mobile station with staccato like drop-outs while transmitting.

Pile-Up :  Multiple stations responding at the same time to a station calling CQ.

Pirate : A station operating without a license or using an existing callsign illegally.

Rag Chew : A casual conversation with another ham. Many hams believe that the conversation needs to carry on for at least a half hour to be considered a rag chew.

Wallpaper : Certificates and awards, often decorating the walls of your shack.

XYL : Wife or female significant other

This is no where’s near a definitive list of ham radio jargon, but these are most the colorful terms and words that I’ve come across during casual conversations, listening to nets, and scanning the dial. Is there a peculiar word or jargon term that I missed? Why not share it in the comments below. 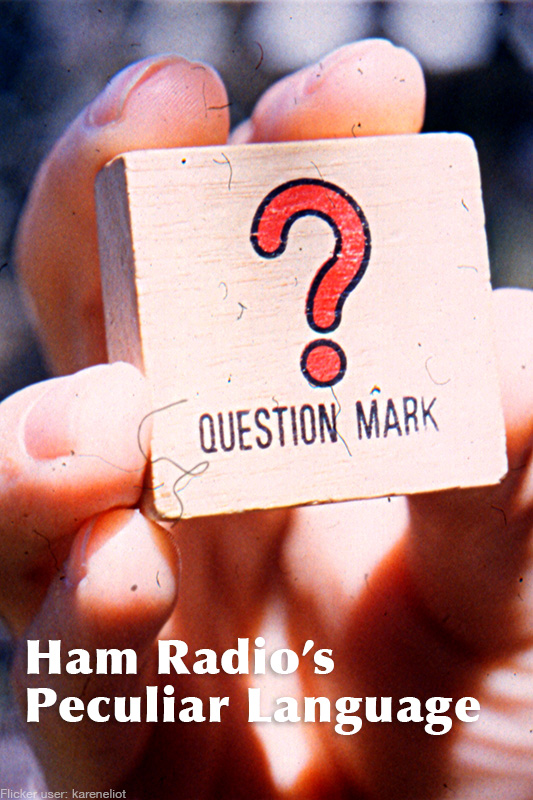 Article Name
Ham Radio's Peculiar Langugae
Description
The richness and diversity of the language of amateur radio has grown over it’s century of history. Some of the words may seem antiquated and others have been born of necessity. Highlighted are some of the more common code words and abbreviations commonly heard over the air or in person when talking to another ham.
Author
Michael Martens