Finding that right channel or frequency for your FM broadcast station can be a big decision. If you are planning to broadcast audio for your holiday lights display, or put up a micro-broadcast community station, the frequency you choose needs to be free of interference and does not interfere with others. But how do you pick the right channel? Listening around the dial can work, but for better results, here’s an online tool that will help you pick a suitable frequency for your transmitter.

In North America, the FM broadcast band spans from 88 MHz to 108 MHz and stations are positioned at .2 Mhz intervals on one of the 200 channels across the band. The stations are assigned a frequency based on the center of the signal on odd multiple decimals of the frequency. For example, the band starts at 88 MHz, so the first channel begins at 88.1 MHz and each channel after that steps .2 Mhz (88.3, 88.5, 88.7, etc). This gives each FM channel 200 Khz to occupy the signal itself and to provide enough space to limit adjacent channel interference.

Now there are many different radio services located within the FM broadcast band, commercial stations, non commercial, educational, and Low Power FM (LPFM) broadcast stations. All of these stations are required to be licensed by the FCC. But within this band you’ll also space for Part 15 transmitters, extremely low power community stations, and even the occasional pirate station. The FCC has more information on licensed and unlicensed broadcast operation. I don’t advocate or condone unlicensed operation, so it’s your responsibility to decide if you wish to follow FCC rules or not.

So how do you find a good channel to set your FM broadcast transmitter? The easiest method is to listen up and down the band, noting any channels that aren’t occupied. But this method isn’t too reliable, as your receiver may not capture a weak signal, but that signal could be strong enough to mix and interfere with your signal. If you live in a rural community, a simple listening survey will be enough, but a safer method is to use a broadcast database like Radio-Locator to find empty channels. 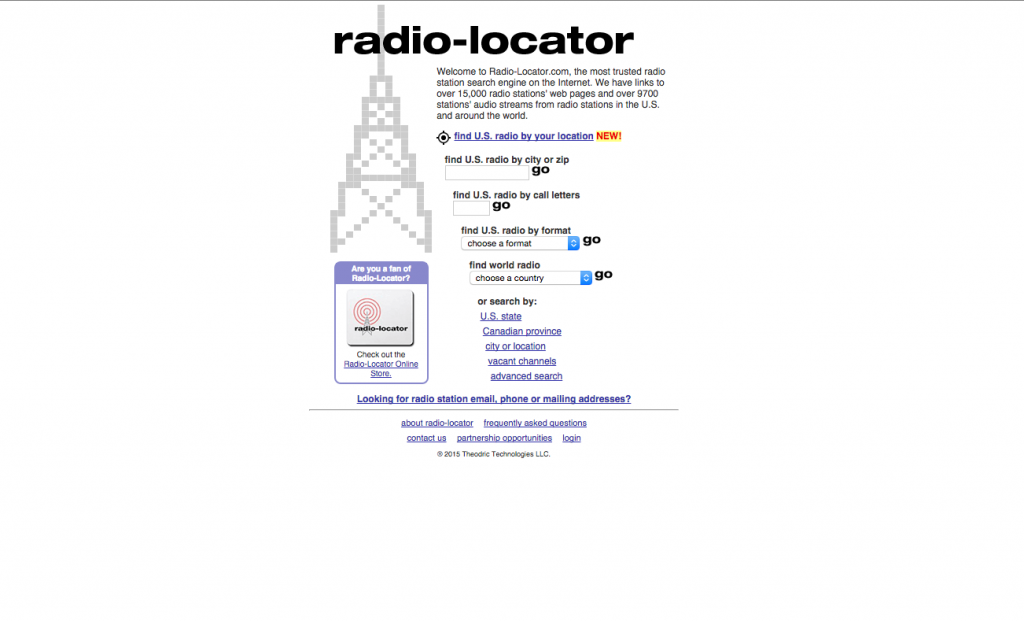 Radio-Locator holds a wealth of information for anyone interested in broadcast radio. Not only will it help you find a vacant channel on the FM band, but it also shows you all the stations receivable within a location, complete with the station’s contact information and coverage map. Not only can you search by zip code or city, but also callsign and even frequency- invaluable if you hear a unfamiliar station and want to know it’s location. So how do you tap this wealth of information? Let’s start with a simple city search.

At the Radio-Locator home page, you are prompted with fields to enter a city or zip code, or the station’s call letters. Entering your local zip code is the easiest way to bring up the list of stations. The stations receivable in your community will come up in a list, sorted by frequency. The list also contains items like estimated distance and signal strength, transmitter power, format, and links that open up to the contact information and audio stream (if available). 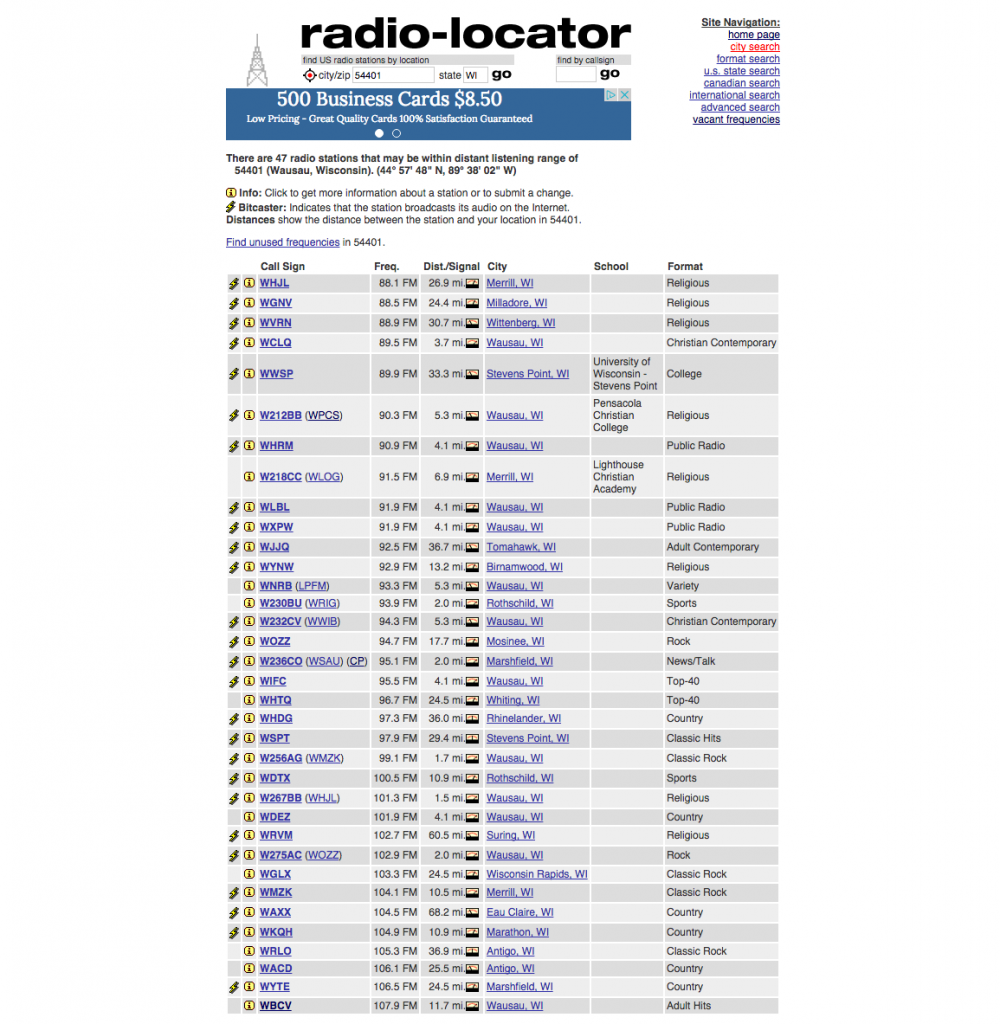 But the valuable part of this website to the micro-broadcaster is the the Radio-Locator Vacant Channel Finder. Here you enter your location (by city or zip code) and the site will take the data available on the FCC license database and give you an estimation of what channels are vacant, and which are second and third best for locating your transmitter. The Radio Locator site uses proprietary algorithms to identity vacant channels based on broadcast station distance, adjacent channel signal strength, and other factors. Since you won’t want other stations to interfere or mix with your signal, and you certainly don’t want to cause interference to other stations, it’s best to select a vacant channel, it at all possible, but the 2nd and 3rd choices will often work too. 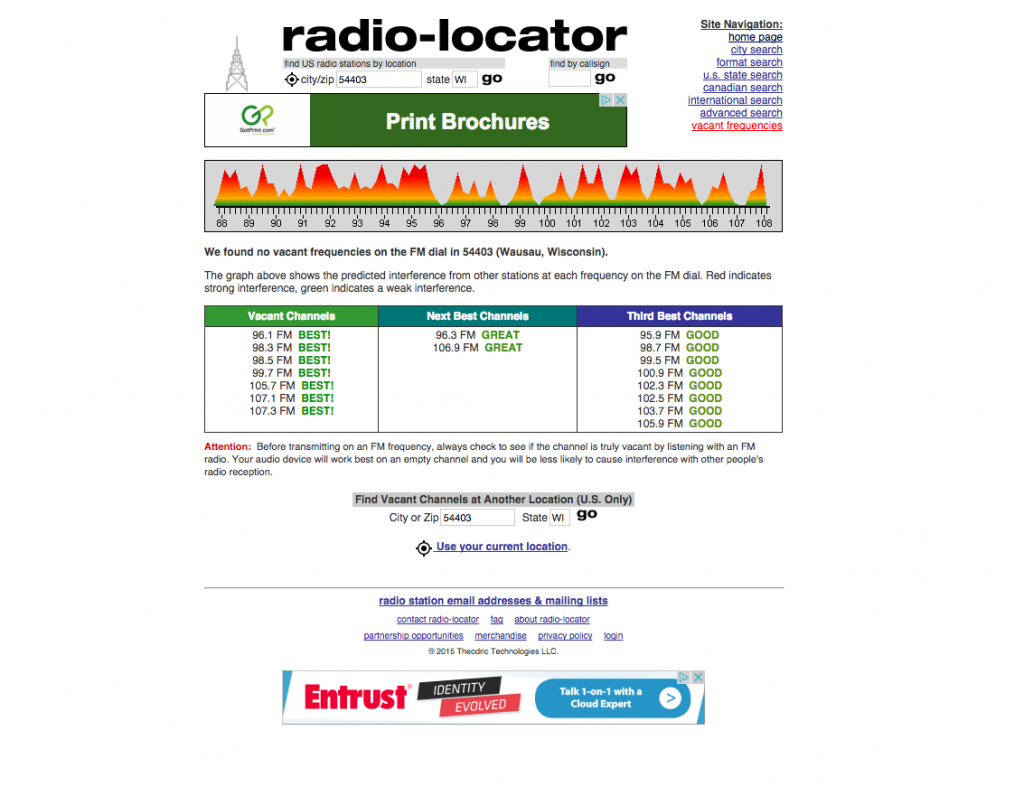 If you are planning to order one of the FM broadcast J-Pole antennas, you will need to specify a transmit frequency. The reason is that the FM broadcast band is over 20 MHz wide and the antenna only provides about 4 Mhz of bandwidth (2 Mhz up and 2 Mhz down from the center frequency). So it’s important to choose a frequency that is open and available in your neighborhood. (If you are ordering an antenna for a licensed LPFM broadcast station, the FCC will assign a frequency to you).

Since the antenna can’t cover the entire FM broadcast band, you should pick a primary channel that has a couple of next best or third best options available to it with that 4MHz band-spread. Then if, for any reason, you need to change frequencies, you can do so without having to retune the antenna. For example, in my community the frequency of 96.1 Mhz is available. But this may not be the best choice as there are only two other available frequencies available within that 4Mhz window of operation. If instead, I get an antenna for 98.3 Mhz, then I’ll have 5 channels to choose from in that window if I need to move to limit interference.

Picking a frequency for your FM broadcast micro-transmitter is important, especially if you want to limit any interference to your signal or others. The Radio-Locator site provides an easy, convenient tool to survey the stations in your area and find a spot on the FM broadcast band with the least amount of interference. Do you have any other resources that you use for FM broadcast frequency selection, please share them in the comments below.