My Conversation with Santa Claus

Christmas is one of my favorite times of year. The season, stretching from Thanksgiving to New Years, makes the short days and long nights tolerable. Who doesn’t get into that Christmas Mood when their favorite holiday song is heard on the radio or in the store? But Christmas also means another thing for the ham radio operator: the chance to talk to Santa Claus.

[pq]A longtime favorite special event for amateur radio operators was the opportunity to talk to Santa Claus.[/pq] And Father Christmas himself was no other than Mickey Hicks, WO6T. In December every year for 38 years, Mickey ran special event W6S. Transmitting from “Santa’s Workshop” in Bakersfield, CA, Hicks gave the children and friends of fellow ham radio operators the ability to talk to Santa.

My children talked to Santa back in 2003. At that time they where 5 & 7 years old, so this would have been a magical time for them. I know it was a memorable experience for me, especially since ‘Santa’ had a warm-up email so he knew what to ask them. Watching their eyes light up when he knew a bit or two about their personal lives cemented the fact that he was the real Santa Claus. A fellow ham heard the conversation and gave me an audio recording of it. If I can find the cassette, I’ll post it online.

What I do have is the QSL card to remember the experience. I recall having to listen for several days until conditions were right for me to catch Santa on the air. A fellow ham, knowing I wanted my kids to talk to Santa, alerted me that W6S had shown up on the DX cluster and he was receiving good copy of the merry old man. The pileup was cordial, and Santa did an excellent job of giving everyone an opportunity to chat. Our conversation lasted maybe two minutes, but it was more than long enough for my children. 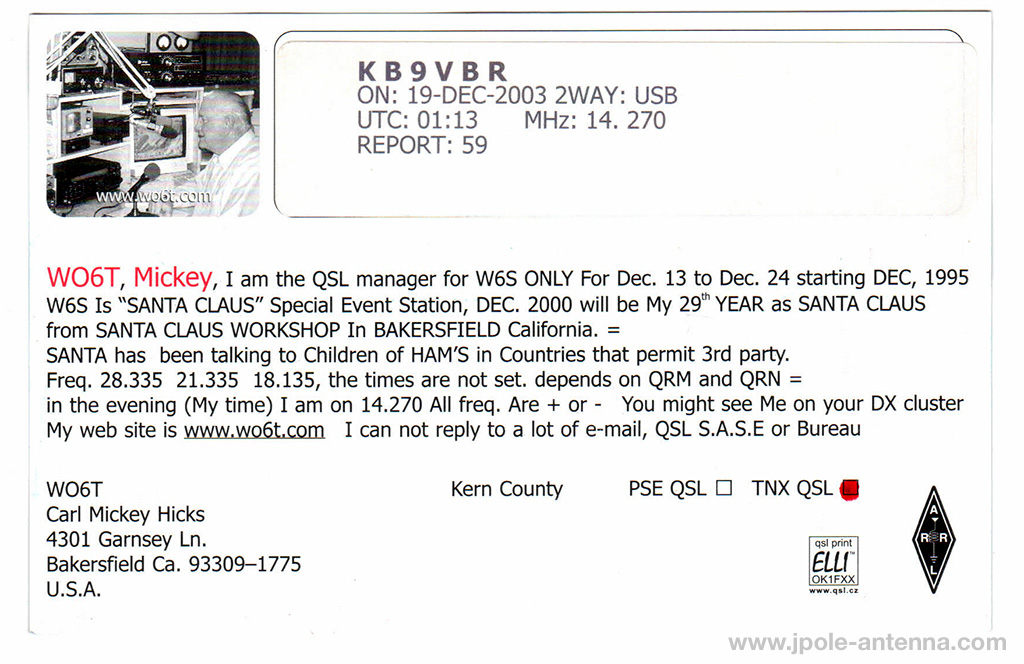 Unfortunately, Mickey Hicks WO6T passed away in 2009. He was 79. I’m not sure how many children he talked to or lives he affected over the years, but in an obituary posted by the ARRL, Hicks commented during an earlier interview:

One of his most memorable experiences was when a young girl he’d once spoken with on the air as Santa came by with her ham ticket in hand to thank him in person for getting her interested. “I had tears in my eyes, of course,” he said. Mark Slater, WI6J –Hicks’ QSL manager — said Hicks was an avid DXer, contester and rag chewer: “He had a passion for radio and making new friends through the hobby he enjoyed so much. Mickey will be greatly missed.” 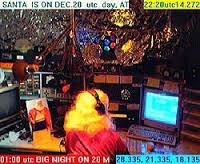 It’s hard to pick up where WO6T left off, I did some searching for a Santa Claus special event station, and couldn’t find anything with the same level of dedication that Hicks had. If anyone knows of a ham picking up the Santa Claus mantle, please leave a note in the comments below.