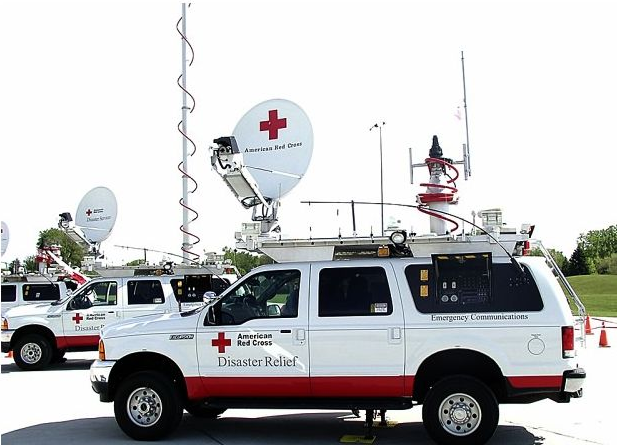 According to a article on the ARRL site:

The American Red Cross has made the decision to phase out and decommission its Emergency Communication Response Vehicles (ECRVs), due to changes in technology, as well as a new satellite system and other factors regarding the vehicle fleet. “Retrofitting the decade-old vehicles with new equipment is not a good use of donated funds, as the long-term strategy is to move to more portable systems,” American Red Cross Disaster Services Technology Manager Keith Robertory, KG4UIR, told the ARRL. “This is consistent with the trends in the telecom and technology industries.”

The vehicles, based on a 2001 Ford Excursion body, where originally a donation from the Ford Motor company. Filled with satellite and two way radio equipment, including amateur radio gear, they where the basis of the Red Cross’es emergency communication system. These ECRVs saw quite a bit of action in disasters since 2002 including Hurricane Katrina and 2007 California wild fires. The fleet was upgraded with Chevy Suburbans, but changes in technology have made upgrading the aging fleet cost prohibitive.

Instead of using vehicle mounted equipment, the Red Cross is focusing on the use of mobile go kits that will contain satellite and two way radio technology. This will allow the Red Cross to  easily equip whichever of their owned or leased vehicles with the appropriate communications gear. Changes in satellite technology have made the large emergency communication response vehicles, for the most part, obsolete.

As the Red Cross modernizes their vehicle fleet, the amateur radio equipment will be removed from the ECRV’s but will stay with the local chapters to be used for disaster communications or as the foundation of a local chapter ham radio station. Emergency communication groups working with the Red Cross should consult with their local leadership on the disposition of any amateur radio equipment that may be installed in vehicles that will be replaced.

This change is part of a larger vehicle modernization plan as the Red Cross rolls out new Emergency Response Vehicles nationwide. The new vehicles will be slightly smaller, get better fuel economy, and be easier to drive for chapter staff and volunteers. Expect the nationwide rollout to take 6-18 months.