The Retevis RT82 DMR Dual Band Handheld Radio is a Motorola Tier I & II compatible DMR radio with 3000 channels, 5 watt output power on VHF and 4 watts UHF.  The folks at Retevis provided me with this model to evaluate so first we’ll take a look at its features and specifications, and I’ll have two follow up videos: one on how to program, otherwise known as creating a code plug, for a DMR radio and a video on responding to your questions or comments on the first two. So please leave your questions in the comments below and I’ll follow up on them in the third video in the series.

DMR or Digital Mobile Radio is an open standard for digital modulation and a radio communications system. As an open standard, its been embraced by many manufacturers and is used both commercially and in the amateur radio service. The goal of the standard was to create a digital system that is low cost, relatively low complexity, and interoperability across brands. Motorola’s Mototurbo is based on the DMR standard and scores of inexpensive DMR radios are available from overseas manufacturers.

In conversations about DMR, you’ve heard about slots or tiers. The specification is designed with three tiers. Tier one and two are for conventional radio systems and tier three allows for trunking. When purchasing a DMR radio, you want one that is both tier I and II compatible. Tier I radios will only work in simplex environments, but a Tier II radio is compatible with both simplex and repeaters. Tier II radios also have two Time Slots. Slots are like sub channels, or separate streams that run on the same frequency. So a DMR repeater has the ability to carry two simultaneous conversations, one on each slot. That’s why it is necessary to have a Tier II compatible DMR radio, as a Tier I model will cause interference to the separate slots, screwing up the whole system.

Finally, one advantage of DMR is that the repeaters can be easily linked via the Internet to create a world wide communications network. Since the standard allows for the creation of talk groups, you’ll find groups or channels set up for geographic regions or particular topics. Two such networks are DMR-MARC and Brandmeister. We’ll talk more about talk groups and networks in the programming video.

The first generation of DMR radios that found their way into the amateur market were limited. As they were often used commercially, you didn’t find many of the features that hams were used to in their offering. The radios were typically single band and had to be programmed with a computer. But the latest generation of DMR radios are certainly a lot more ham friendly. The Retevis RT-82 is a dual band radio, covering both the 2 meter and 70cm amateur radio bands. Along with being computer programmed, it also can be programmed on the front panel making it easier to change frequencies on the fly. The radio also has analog and digital DMR capabilities, so you can still use it on your analog repeaters, making it a more useful handheld. 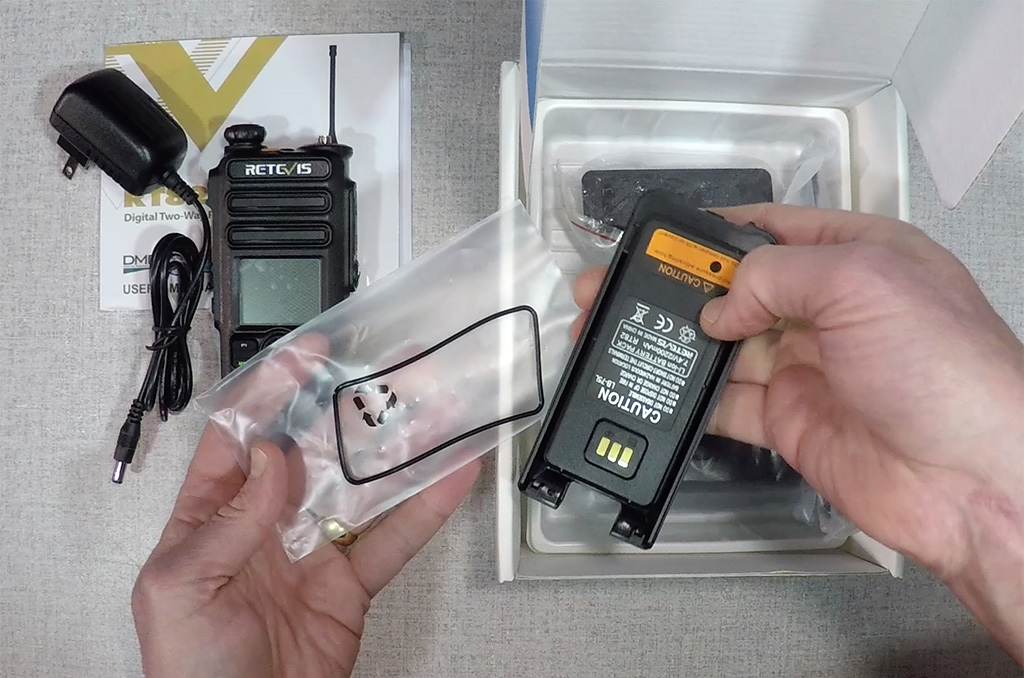 Opening the box, the Retevis RT-82 comes with the instruction manual, the radio itself, which offers five watts of power on VHF and 4 on UHF. The radio also meets the IP67 waterproof specification. Technically that would allow you to submerge it for up to 30 minutes, but I’m not going to test that. Let’s just say it will be highly weather resistant. Next is the battery, lithium ion with 2200 Mah of power. It also comes with a little gasket for the waterproofing. You also receive the antenna, battery charger and belt clip. A programming cable is provided separately, but is included if you purchase the radio on the Retevis website. See the video description below for links to purchase it.

As for the features, the radio comes with the ability to hold 3000 channels and 10000 contacts. it’s compatible with Motorola Tier I and II, so it has Tier II dual time slot compatibility for use on DMR repeaters. The radio is dual band with a dual watch feature. So you can monitor two channels simultaneously. The radio is firmware upgradable, has a color LCD display, and can be purchased either with or without a GPS unit.

The antenna connector on the radio is SMA female. This is the opposite of the chinese analog handhelds, so you’ll need an SMA male adapter for an external antenna or SMA male aftermarket antenna.

On the top of the radio is a combined volume knob and power switch. You’ll also see a transmit/receive LED and a an orange key that can be programmed for various functions. Along the side of the radio is the push to talk button, highlighted in orange, a side key that toggles between the main channel and sub channel, and two side buttons that change the channel. These keys are also user programmable. On the other side of the radio is the programming cable and speaker mic connector. This is normally covered with a little plastic plate. It’s a non standard connection, so you may want to order a speaker mic when you purchase the radio. 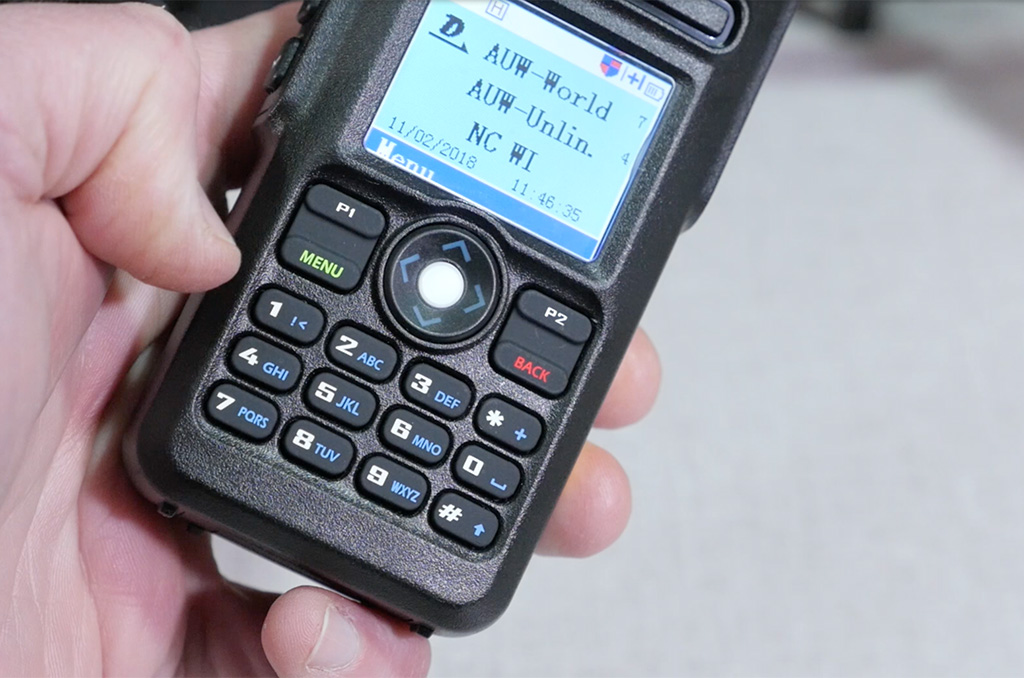 Finally, the front panel. The radio has a numeric keypad, two programmable buttons labeled p1 and p2, a menu and back button, and a track ball selector. The track ball lets you change channels, scroll through the menus, and select options. It’s a little different user interface and make take a bit to get used to. I found the track ball to be a tad sensitive and would scroll a lot faster than I expected.

Once the radio is programmed, operation is pretty straight forward. You use the menu to change zones or select talk groups. Transmitting is as easy as pushing the PTT button and speaking into the microphone. Transmit audio quality is quite good, I didn’t receive any negative comments on the audio quality. The receiver is sensitive, analog sensitivity is .2 microvolts and digital sensitvity is .25 microvolts, the squelch level is adjustable on the menu or via programming. And the speaker is loud, providing up to 1 watt of audio output.

As for my impressions of the radio, I like the look and feel. Ergonomics is an important consideration in any handheld. The RT-82 feels good in the hand. It has a good weight and is well balanced. The PTT is in the right spot and the buttons have a good touch response. My only complaint on the track ball, it’s quite sensitive. But if you don’t like the ball, you can still accomplish all the tasks with the side and front buttons. 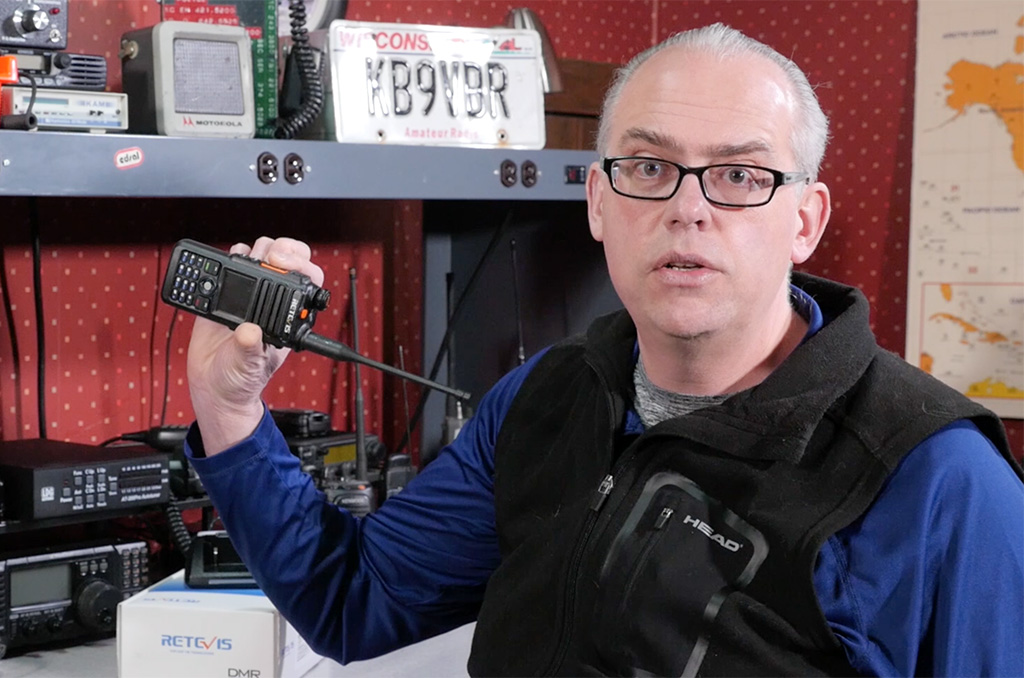 Menu system is well laid out. Most of the features can be set with the software, but there are a few you need to change by digging through the menus. In its default setting the zone selection is a little putzy, but this can be resolved by setting one of the programmable keys to handle that task.

As for transmit and receive, the radio functions quite well. Internally these DMR radios are pretty much the same, so you’ll find their on air performance to be quite similar. Where product differentiation comes into play are with tweaks to the firmware and the ergonomic design. Since I find the ergonomics to be quite good, I would recommend this model for someone looking for a nice DMR handheld.

Well, that’s it for the first look at the Retevis RT-82 Dual Band DMR handheld radio. You can order the radio direct from Retevis, retail price and links are in the video description below. In my next video, we’ll take a dive into the programming software so you can build your own DMR code plug, and the final video in the series I’ll answer your questions about the radio, so please leave your questions in the comments below.