A popular landing spot for most new amateur radio operators is the two meter band. With the popularity of inexpensive handheld radios like this one, and the proliferation of two meter repeaters, it’s no wonder this is the new Technician’s first experience with ham radio. But the 2 meter band isn’t all voice and repeaters. Today we are going to talk about band plans, how they organize the two meter band, and what you can expect to find in between 144 and 148 Mhz.

Continue reading, or watch the video below:

A Band Plan is agreement of what radio modes and operations should take place on a certain frequency. They carry no weight of law, but almost all hams accept them as such. The FCC won’t fine you if you transmit FM at 144.3 MHz, nor will you get in trouble with the feds if morse code is transmitted at 146.52 Mhz. But you will make other hams using these frequencies upset if you don’t follow the self-imposed rules. Remember, radio spectrum is a finite resource, and the FCC has given amateur radio operators a lot of latitude in the policing of their spectrum.

Now there is a bit of spectrum in the two meter band that the FCC does specify for an intended purpose within the rules of Part 97, and we’ll talk about that in a bit. But for the most part, the FCC gives amateur radio coordination and organizing bodies the power to manage their own spectrum.

So lets start at the bottom of the band. 144.0 to 144.1 Mhz is reserved exclusively for continuous wave, or CW morse code, weak signal work. This allocation is set by the FCC in the amateur radio part 97 rules and you will get in trouble with the feds if you transmit something other can CW in this chunk of spectrum.

Moving up a bit from there, 144.1 to 144.3 is reserved for CW and sideband operation. You probably thought that the 2 meter band was all FM and repeaters, why would you want to do sideband and morse code? Well, even though VHF propagation is primarily line of sight, you can take advantage of atmospheric anomalies, like troposheric ducting to carry your 2 meter signal hundreds to thousands of miles. Meteor scatter and moon bounce aficionados will also be found down here. Both sideband and CW are excellent modes for weak signal work, so it stands to reason to give them an exclusive chunk of spectrum to do some 2 meter DX.

Moving up a bit from the sideband portion of the band, you’ll find the frequency of 144.39 Mhz. This is the home of APRS, or the Amateur Position Reporting System. APRS is a digital mode using FM or frequency modulation mode to transmit and receive short digital packets that contain geocoded location information or text. APRS has become a world-wide geolocation and messaging system, so all activity is located on one single frequency.

Since we are talking digital, most digital operation on the VHF 2 meter band is FM using AX.25 style packets. AX.25 is a data communications format dating back to the 1980’s (and possibly earlier). First used over the air for Packet Radio, this mode allows you to transmit and receive data at 1200 baud on 2 meters, or 9600 baud at higher frequencies. With today’s gigabit ethernet and 4G data networks, these speeds sound quaint. But packet radio is still a viable method of exchanging text based information over long distances. You’ll commonly find packet users on the frequencies 145.01. 145.03, and 145.05 Mhz.

Speaking of packet, there’s an interesting data communications mode called Winlink 2000. This mode uses AX.25 packets to transmit and receive conventional email messages. A great tool for emergency communications, Winlink nodes can be interfaced with a public safety agency’s email system to provide another method of sending and receiving Internet email if conventional communication methods are down. You’ll either find Winlink stations on the packet frequencies around 145.01 Mhz or up a little higher in the experimental and miscellaneous portion of the band.

Let’s talk a moment about satellite communications. Orbiting above the Earth are scores of amateur radio satellites. These satellites carry digipeaters and transponders on them allowing the ham to communicate using FM, sideband, and digital modes. Early satellites had uplinks on 2 meters and downlinks in the 10 meter band, but now most modern birds in space are using a combination 70cm and 2 meter uplink and downlink. You’ll find satellite frequencies between 144.3 and 144.5 Mhz and 145.8 and 146 Mhz.

One satellite that is very easy to work is the International Space Station. You’ll find the ISS ham radio station running on the digital APRS mode at 145.825, but occasionally they will be on the air with at 145.800 Mhz FM voice slow scan TV. A link to the complete list of ISS frequencies can be found in the show notes below.

Most repeaters on the air use analog Frequency Modulation as their mode of operation, but a growing number of amateur radio repeaters are using digital modes like APCO P25, Icom’s D-Star, or Yaesu’s Fusion system. There’s currently no one digital standard and each mode has their unique advantages. So while scanning the bands, if you happen to stumble upon a buzzing or grinding noise, it’s probably a digital repeater. 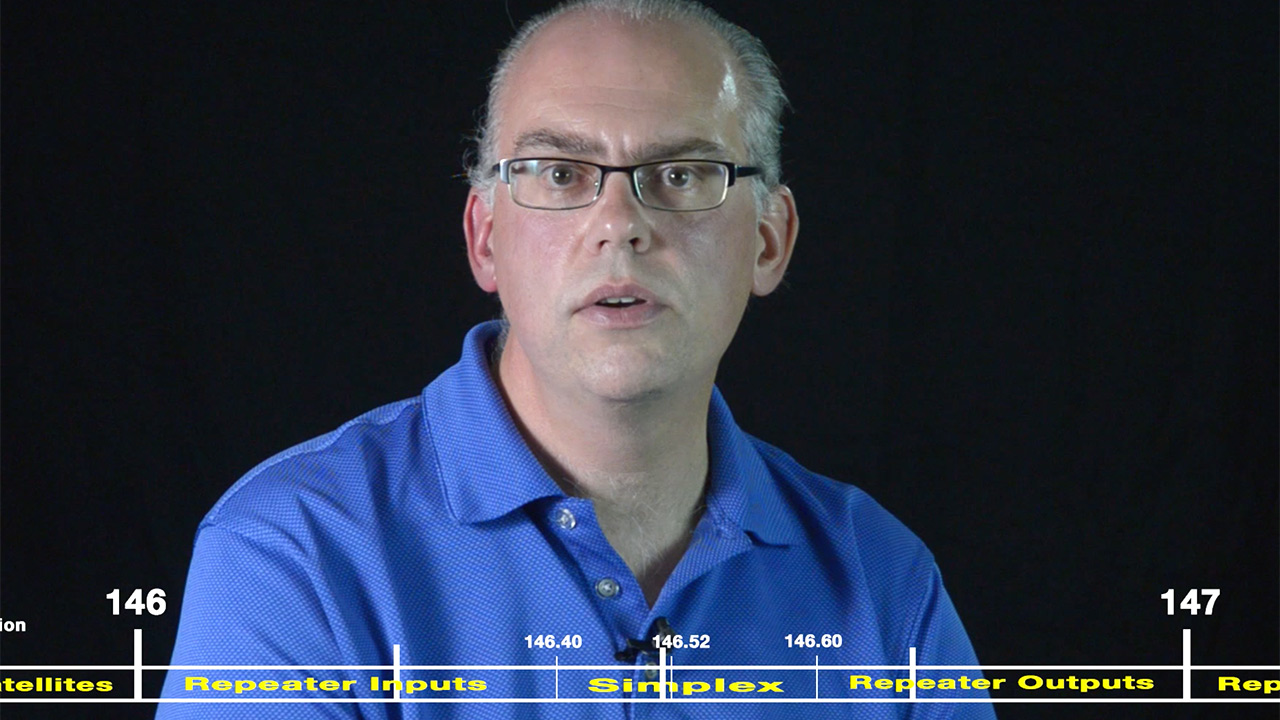 With all this talk of weak signal, data, satellites and repeaters; is there any room left for simplex operation? I just want to talk to my friend on the other side of town. Well, you don’t have to tie up the repeater with your rag chews as there are plenty of simplex frequencies available on the 2 meter band. Most band plans have FM simplex channels allocated between 146.40 and 146.58 and 147.42 – 147.50 Mhz with an established National Calling Channel at 146.52 Mhz. These dedicated frequencies give hams the ability to talk point to point without fear of disrupting other modes. But remember, band plans aren’t set in stone, and if you do a little research and listening in your local area, you will probably find an unused frequency in the repeater output section of the band that won’t interfere with another use. If the frequency is clear and you not interfering, you’re welcome to use it. But remember, if you cause interference with an established and coordinated repeater, satellite link, or digital operator, it is up to you to stop and change frequencies. The FCC has determined that users that are granted a frequency by a coordinating body have precedence over the use of the frequency. So in your search of a simplex frequency, maintain good amateur practice and do a bit of research before picking a random simplex frequency.

So to recap, the amateur radio two meter band from 144 – 148 MHz is active with a wide variety of modes and operations, from CW, to sideband, FM, data, and satellite. VHF propagation is typically line of sight, so the band may sound empty if you scan from the bottom to the top, but if you listen on a particular frequency, you may be surprised at what you hear. Use your band plan as a roadmap for finding those little ‘spots of gold’ on the two meter band.

Icom America Band Plan Chart
(The one I hold up in the intro)
http://www.icomamerica.com/en/downloads/default.aspx?Category=352