Amateur Radio Licenses On The Rise

Since 2007, we’ve seen a general rise of people joining the amateur radio ranks. This is great news after steady declines in numbers during the first half of the 2000’s. What caused this decline, and could the bottom fall out of the amateur radio population again? Digging into the license data numbers shows us the history and gives insight on where the amateur radio service is heading.

“The three current license classes also peaked at the end of 2013,” notes ARRL VEC Manager Maria Somma, AB1FM. “FCC-issued club station licenses are also at an all-time high in the FCC database at 11,363. The number of new licensees has increased by 7 percent over last year (28,886 in 2013 and 27,082 in 2012).” Somma said that a significant number of Technician licensees were earned through large emergency communication and Community Emergency Response Team (CERT) classes.

Joe Speroni, AH0A, maintains an fantastic database of amateur radio license statistics that reach back to 1997. These numbers can be polled and graphed to give you an excellent snapshot of the health of amateur radio for just about any date from the last 15 years. Playing around with the data, I’ve come to some conclusions of where the amateur radio could be heading.

First off, what’s the deal with the big dip in the mid 2000’s? The amateur radio numbers are influenced by two events that occurred in the 2000’s: the FCC’s license restructuring of April 2000 and the FCC complete elimination of morse code testing in 2006. Restructuring saw the elimination of new Novice, Tech Plus, and Advanced licenses, and cutting morse code testing down to just 5wpm for General and Extra. This caused a great reshuffling of the license holders as Tech Plus holders only needed a written test to upgrade to General & Extra, and with a 5 word per minute code test, many General operators eventually upgraded to Extra.

License restructuring of 2000 and code test elimination of 2006 caused Technician numbers to drop as hams upgraded to higher classes.

There was a big drop in the number of Technicians in 2000 with restructuring and another in 2006 with the elimination of morse code testing. In this 2000-2006 time period, while General and Extra numbers grew, Technician growth was quite stagnant. After the second drop in 2006, we start seeing the rebound and genuine growth of the Technician license holder. With these FCC policy changes well behind us we are now seeing good organic growth of all classes. 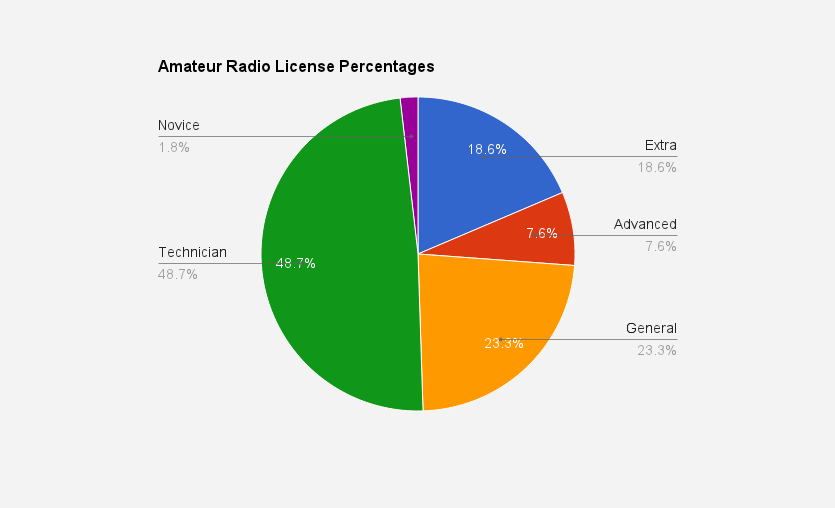 Of the 717,201 license holders at the end of December, 2013, over 349,000 or 48.7% hold a Technician class license. This percentage has held pretty steady, -+1% for the last 7 years. The average technician has held their license for less than five years. As the ARRL points out, the encouragement of CERT members to get their amateur radio license has helped swell these numbers.

But in actuality, the biggest gain in the service we see are the upgrades to Extra. In 1999 prior to restructuring, 11.2% of amateur held an Extra class license, today the number swells to 18.6%. I make this distinction as the naysayers back then predicted that the FCC’s plans to restructure the license classes would lead to the death of the hobby. But we see over the 14 year history that with first the reduction of morse code speed testing and its eventual elimination in 2007, our ranks of Extra class operators have swelled to almost 19%. But the biggest gains weren’t with the elimination of code, just the reduction. Extras grew from 11.2% in 1999 to 16.7% in 2007, with a final push to 18.6% this year.

Due to attrition, we are seeing the slow elimination of the Advanced and Novice licenses. Today there are only 54,293 Advanced holders and 13,097 Novice tickets in existence. Since no new licenses for either of these classes have been granted since April of 2000, Advanced numbers have dropped in half and Novice by almost 75% in the subsequent time period. I know of more than a few Advanced holders that won’t upgrade just so they can retain a license class that no one else has, or they feel that the small slivers of additional spectrum aren’t worth the effort of the upgrade. I think in the next 4 years we’ll see a very dramatic decline of Novice license holders. But this downward tug isn’t going to generate another bottoming out like we saw in 2006.

Can this growth continue? Over the next three years we see an increasing number of licenses set to expire. There is no word yet on how many of these license holders will renew, but if we can expect an 80% retention rate, the amateur radio service will need to attract at least 1,400 hams per month in order to keep the status quo. Is this doable? According to the ARRL-VEC, they serviced over 34,000 license applications and with no word on what the other VECs did, I think we are in ok shape.

It’s been fun slicing and dicing the data to spot trends. The FCC’s licensing restructuring was a bigger shock to the numbers than the elimination of the morse code testing. But with their effects mostly past us, I feel the changes have been positive for amateur radio. How do you feel about the numbers? Please tell us in the comments below.