A few months ago, the folks at Retevis sent me an RT-82 dual band DMR handheld radio for review. After that review, they inquired if there was any other model that I’d be interested in checking out. The RT-95 dual band mobile transceiver caught my eye. The form factor and features caught my eye, and I told them that I’d be glad to give my opinion on it. Well, they sent me the radio and I’d been using it for a few weeks, and I have kind of a mixed reaction to it. More about that in a little bit, first lets dig into the specs.

The Retevis RT-95 is a dual band mobile analog transceiver that operates on the 2 meter and 70 cm amateur radio bands. Power output is either 5, 15, or 25 watts. Ergonomics and build quality are quite good and the radio features a full color TFT LCD screen. The body is an alloy construction for heat dissipation. There are fins on the back, but no cooling fan. The buttons and knob are large enough for easy operation. The microphone is comfortable to hold and has control buttons for many of the radio’s features. Overall I would give the radio very high marks for looks and ergonomics. 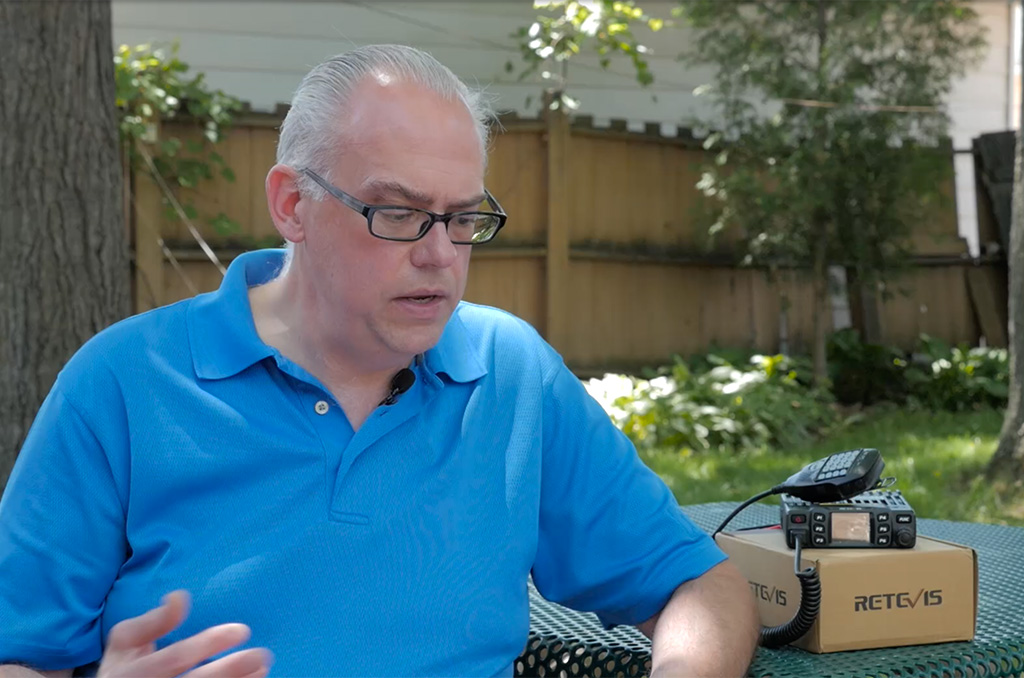 Getting into the features, the RT-95 has analog operation on the 2 meter and 70 cm amateur radio bands. It also can be programmed for out of band operation. Power output is either 5, 15, or 25 watts. So it also isn’t the most powerful radio on the market. But 25 watts will be adequate for most purposes, especially if you plan to use it on repeaters or local simplex. The radio has 200 programmable channels and you can set separate CTCSS and DCS tones for each channel. It also has dual watch capability so you can work on the main channel and monitor a sub channel at the same time.

Digging through the radio I found a few features that I haven’t seen implemented in other mobile radios, notably: Automatic Power on. you can program the radio to turn on when the power is applied. Kind of a neat feature if you want the radio active when you start your car. It also has a rotatable LCD screen. The speaker is on the bottom on the radio, but if you would like the speaker to be on the top, you can turn the radio upside down and then press a button to invert the screen. The radio also has a running voltage indicator on the display, so you will always know the voltage of your power source.

Programming the radio is a little bit of a challenge. You can only program it with the downloadable software; so a programming cable is necessary. The cable is also not included, so be sure to purchase a cable along with the radio. The popular Chirp programming software also doesn’t support this radio, so you will have to use the software provided by the manufacturer. As a side note, I think these radio manufacturers would be better served by supporting Chirp development for their radios. It’s so easy to export and import channels in Chirp, so you can get a new radio up and running quickly.

The programming software is a bit archaic. You can add channels and delete channels, but you can’t renumber or move channels around. So plan your program carefully, because if you want to insert a new channel, it will involve deleting and re-adding channels to make space. This shortcoming could have been avoided with a better user interface design. All in all, my biggest disappointment with the radio was in programming it.

One other shortfall I need to highlight is that the radio conforms to the Asian band plans and you will will need to enter the diagnostic mode and switch it if you want to use the American 70cm FM band segment. If you don’t ‘open up’ the radio’s transmit capability, you will only be able to use the 70 cm band up to 440 Mhz, which is not good in the US. I’ve found a video on Youtube that shows you how to do it, link to those instructions are right here. Otherwise Retevis will send you the instructions upon request. 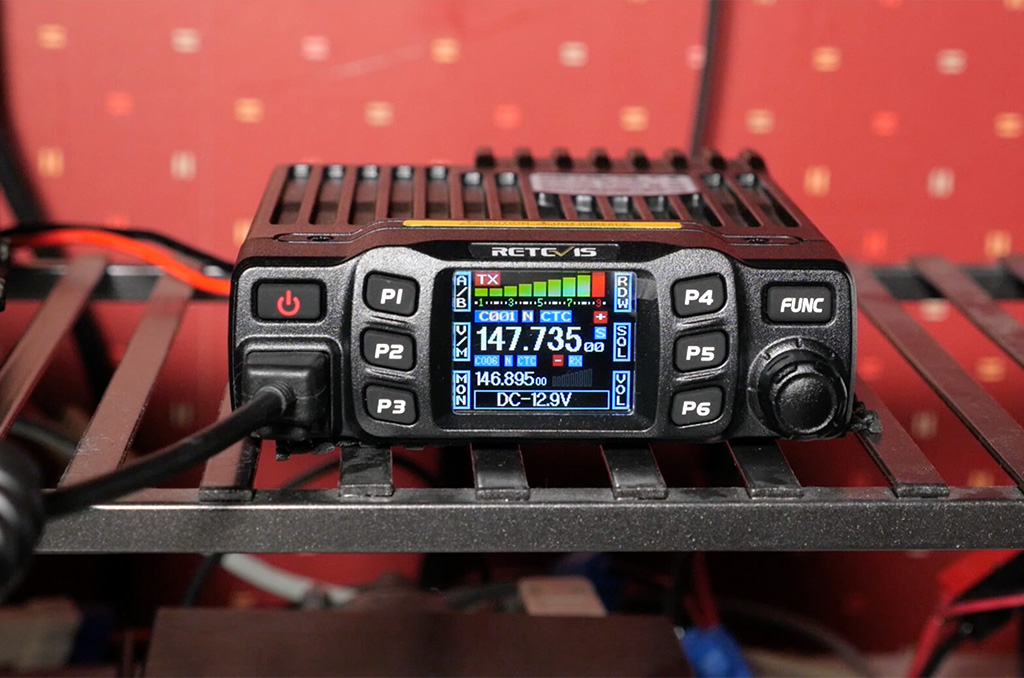 But once you get over the programming hump, the actual operation is pretty straightforward. The built in speaker is loud and the buttons are easy to use. The audio quality of the microphone is good, so there is no issues there. The six Program function buttons toggle different features on the radio, like the A/B band switch, Monitor, VFO or Memory channel, Squelch, and volume. The screen gives you cues to what the buttons do, so it’s easy to figure out their operation. Pressing the function button toggles another set of options for the buttons, like setting power level, inverted screen, colors, etc.

One function I like the display option button. Normally you will see the main band and sub band on the screen and you will hear both bands if they are active. But say the sub band is active and you wish to concentrate on the traffic on the main band. Pressing the HDW button, or P4, will toggle a single band display screen and mute the sub band. I really like that feature.

Ok, here’s my review of the Retevis RT-95 dual band mobile transceiver. First the things I like: I like the form factor and ergonomics. I found the radio easy to use once it was set up. Transmit quality is clean and the receive audio is good. The display is a little cluttered, but it is easy to read and has an excellent signal strength meter. I really like the once touch button to switch in and out of dual watch mode. The option to invert the screen is a great idea and gives you more options for mounting the radio. Auto power on is nice, but not a feature I’ve been looking for. Once you get the radio set up, it really is a nice rig.

Now for the the bad; the programming process sucks. There really isn’t a better way to say it. The software is clunky and lacks in modern user interface design. Instead of trying to improve the software, the manufacturer needs to work on making it compatible with Chirp. Also, the programming cable is not included. Since the cable is required to program it, I think it should have been included.

Final word, it’s a good radio once you get it programmed, so weigh that potential for aggravation into your purchase decision.

That’s it for the Retevis RT-95 dual band mobile transceiver. Do you have a question or comment specific to this model, please leave it in the comments below. Maybe I missed something in this review you may be interested in, I’ll be glad to follow up on any questions.